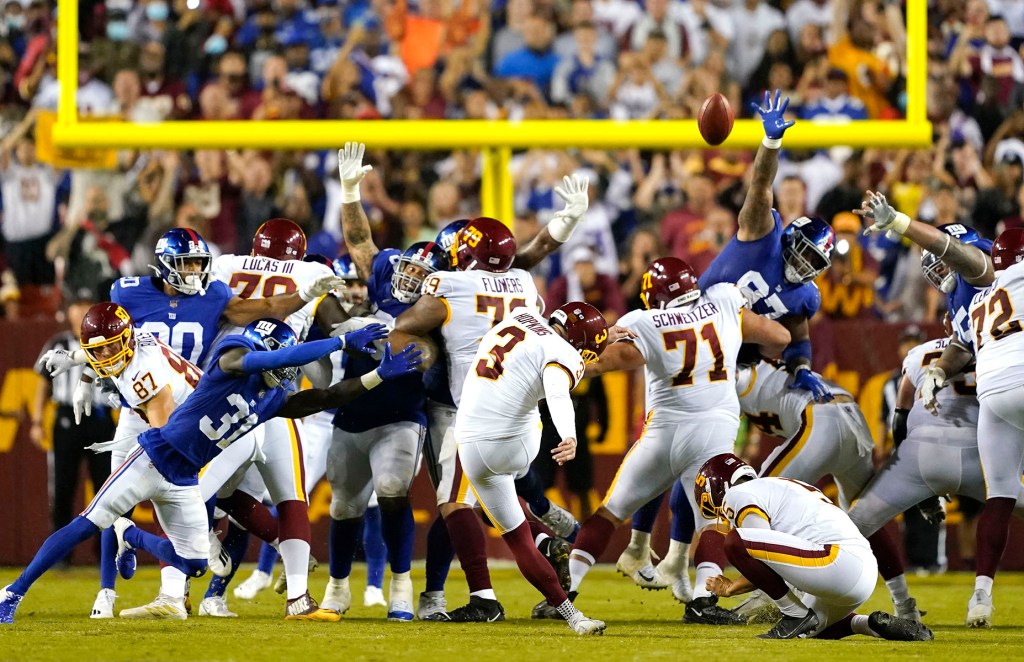 
Nothing can stop the Giants from their destiny of starting every season with two straight losses.

Not a rare turnover-free and aggressive game from Daniel Jones.

Not facing a backup quarterback who tried to give away the win.

Not even a gift from the football gods.

The Giants celebrated Washington’s missed field goal as time expired Thursday night, but defensive tackle Dexter Lawrence was penalized for being offside on the snap and kicker Dustin Hopkins was given a second chance. Hopkins split the uprights from 43 yards on his do-over, and the Giants suffered the worst imaginable, 30-29, loss at FedEx Field.

The Giants five-game winning streak against Washington was snapped. Jones fell to 4-1 in the series (4-19 against all other opponents) despite just his sixth career turnover-free game. He has 40 career turnovers in 29 games.

Just when it looked like the Giants avoided a death-knell 0-2 start, the yellow flag came flying in. So, the Giants are 0-2 for the eighth time in the last nine years – none of which have resulted in a trip to the playoffs.

With the Giants trailing 26-20, cornerback James Bradberry, who is coming off a breakout Pro Bowl season, interrupted a miserable two-game start by jumping a route and setting up the Giants in the red zone. Bradberry surrendered a touchdown (for the second straight game) and committed two automatic first-down penalties earlier in the game.

The Giants’ inability to get a first down forced Gano’s third field goal of the fourth quarter. The chip shot followed two from 52 and 55 yards.

Jones didn’t just play smart. He played well, completing 22-of-32 passes for 248 yards and a touchdown.

Despite all the offseason investments in playmakers, Jones’ favorite targets remain his old-school teammates. Sterling Shepard made nine catches for 94 yards and earned the “Mr. Third Down” nickname he desires.

Darius Slayton caught a 33-yard touchdown pass and was set up for another, but the would-be 43-yarder slipped through his fingers with no defender in sight. Slayton only got one foot in-bounds on a difficult catch that could’ve extended the Giants’ final possession.

It looked like it might not matter because the defense held Washington to settling for a 48-yard field goal with five seconds remaining. The kick sailed wide. And then came the heartbreak: The Giants are now into the territory of inventing new ways to lose during a four-year stretch as the worst time in the NFL (18-48).

After a brutal season-opening offensive performance, the Giants marched 79 yards over nearly six minutes to start the game. The 11 plays included mixing and matching tempos, personnel groupings and included motion and rolling the pocket before Jones scored from six yards out on a draw – a favorite trick of his by the goal line – for a 7-0 lead.

In losing to the Broncos, the Giants unthinkably scored zero points on four separate drives that included first downs at the opposing 30-, 22-, 16- and 7-yard lines. The theme repeated in the first quarter when Barkley’s best rush since returning from a torn ACL (41 yards) advanced the ball to the 35 but the tackles promptly failed: Andrew Thomas false started and Nate Solder allowed a sack, forcing a punt instead of a field goal.

The tackles had back-to-back costly penalties later in the game.

A controversial call ultimately cost the Giants four points. C.J. Board was flagged for holding the last defender who had a shot at tackling Jones on a 58-yard touchdown run, but replays showed good technique by Board. The Giants settled for a first down at the 22-yard line and, even after a defensive pass interference penalty, managed only a field goal for a short-lived 10-7 lead.

Every point mattered in the end.

Gano’s fourth field goal put the Giants in front 26-20, but Washington needed only 17 seconds to take the lead. Heinicke exploited a mismatch and pump-faked linebacker Tae Crowder into a freeze as J.D. McKissic streaked for a 56-yard gain. Ricky Seals-Jones finished the quick strike with great footwork in the corner of the end zone.