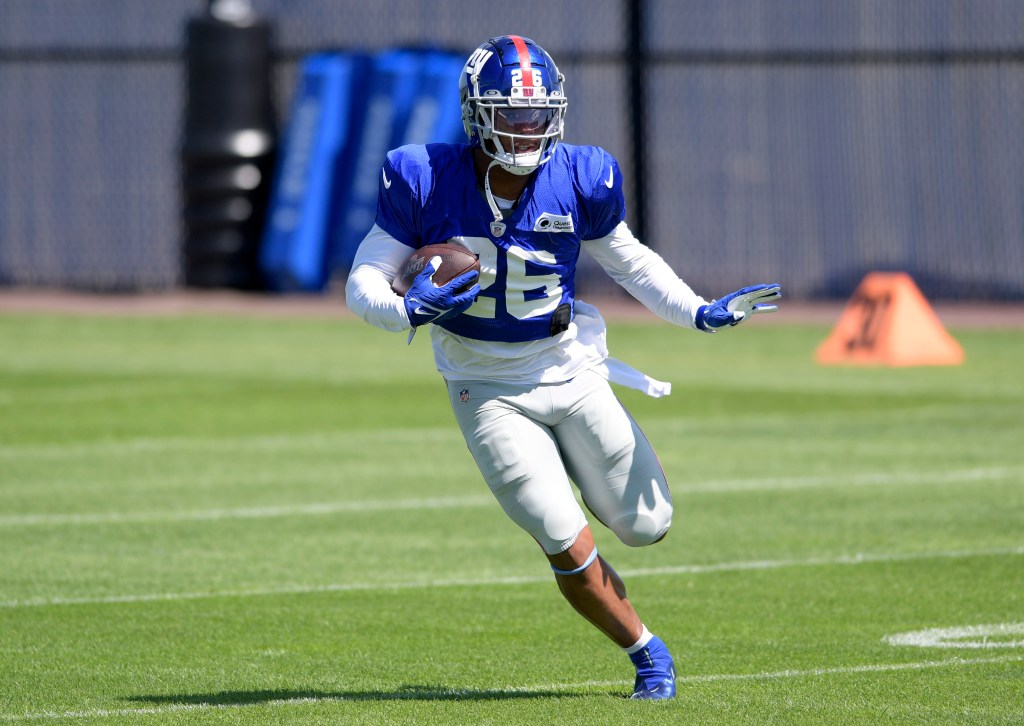 The big decision for the Giants regarding Saquon Barkley might not be the question asked around this team at least once a day for, oh, about the past two months, perhaps longer: Will he be able to play in Week 1?

A more pressing and urgent thing to address might be this: The Giants can have him in one of the first two games, and they need to choose which one makes the most sense, for the team and the player.

At some point, Barkley must be let loose, and, judging from everything seen, heard and surmised throughout training camp, that point is now. There is little else Barkley — coming off reconstructive knee surgery — must show in order to prove he is ready to test his repaired anterior cruciate ligament in a real game, taking real hits, against a real opponent.

It is a brutal sport and it is impossible to tiptoe into the cold water, one inch at a time. And Barkley is ready to take the plunge.

But if that plunge comes Sunday against the Broncos in the season opener at MetLife Stadium, can he make what unfortunately for him must be an almost instantaneous recovery and be ready to play four days later on Thursday night in Washington?

Players with no physical issues find this rapid turnaround immensely difficult. The first time Barkley gets in a game and takes hits, there will be aches and pains that come along with the contact — something he has not felt in nearly one full year.

After putting Barkley in bubble wrap for all three preseason games and both of the joint practices the Giants engaged in, Joe Judge said Barkley needed to get roughed up some in practice before he would feel comfortable unleashing him in a game.

This was not about Barkley getting dragged to the ground or pummeled by an on rushing linebacker. There was never going to be live tackling of Barkley administered by his teammates.

So, the first actual punishing pounding Barkley will take will be in an actual game.

Those hits take a toll on all running backs, even those with Barkley’s uncommon physical gifts. His surgical knee could be sore, there could be some swelling. This is all normal. The soreness and swelling take time to dissipate and in such a short week, time is not on his side.

This is not a soft tissue injury such as a hamstring, which is often impossible to soothe in only a few days. This was, however, a major procedure Barkley underwent and there is no sense asking him to test it the first time, and then again a second time so quickly.

“I think the return of 26, whenever that may be, is gonna be pretty special,’’ safety Logan Ryan told the Post.

It will also be pretty anxiety-filled for everyone involved, waiting to see how Barkley holds up and responds to his first action since going down in Week 2 last season in Chicago. It will be deflating for Barkley, who has worked diligently through a grueling rehab, to be told to sit out the opener, if that is the direction the Giants opt to go.

The team might look at the extra few days as worthwhile, as far as Barkley’s readiness, and also view the game in Washington, against an NFC East rival, as more vital, in the long view, compared with the opener against the Broncos, an out-of-conference opponent.

These discussions have already been had inside the building and will continue to be had this week.

There is no doubt Barkley wants to play. Now. And it would wound him to not be a participant as the Giants welcome back their fans into the building for the first time since the end of the 2019 season. His teammates, even the new ones, see and sense his eagerness.

“He brings a certain energy to him and he’s a really hard worker,’’ Ryan said. “He just has so much confidence in himself and I think it rubs off on people. I just think he’s a guy that’s a force multiplier. I think he makes the players around him better and the guys block a little better trying to spring him. He’s just an energy bunny for our team.’’

Perhaps the Giants charge up the energy bunny, see what he can do with limited (10-12 touches) action in Week 1 and see how his body responds. Perhaps he gets to play in only one of the two games. So decisions remain, regarding Saquon Barkley.

Hospitals in crisis in least vaccinated state in US – World News