Giants season preview: Could this team finally be ready to turn a corner? 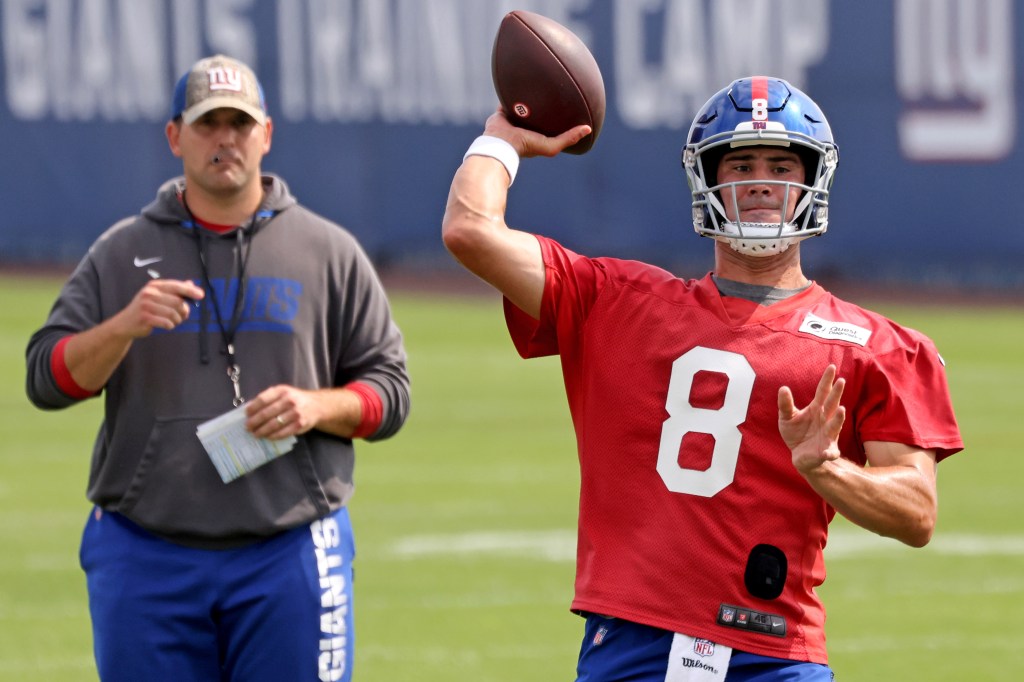 If one word can encapsulate what is going through the minds of the Giants — players, coaches, front office and fans — it is this. Enough with all the failure. Enough with falling out of the race by Halloween. Enough with associating with the worst franchises in the NFL, in terms of how many you win and how many you do not.

The Giants went 6-10 in Joe Judge’s first season and were much better in the second half (5-3) than they were in the first (1-7). That they were alive for the NFC East title going into Week 17 was an indictment of the division; the Giants did not deserve to be a playoff team.

Now? Few around the league look at the Giants and think “contender.’’ Respect and credibility have to be earned. The organization is staunchly behind Judge, seeing him as the man to engineer a turnaround. General manager Dave Gettleman inherited a mess and the rebuilding has certainly not been swift and steady. He spent in free agency and added weapons on offense, but the onus is on quarterback Daniel Jones, 24, to prove he is a viable starter and winner.

The in-house expectation is that this team is ready to compete for the postseason — to be part of the discussion late in the year. Giants ownership prides itself on stability, but coaches have come and gone and a front-office shake-up could be next if this team flops.

It all comes down to this, doesn’t it? Only the Jets were worse at scoring points in 2020, and it is perhaps remarkable the Giants managed to get six wins averaging 17.5 points a game. It is too simplistic to say this all comes down to Daniel Jones, because he is not a special talent who can do all sorts of wondrous things by himself. But he needs to show more than he did in a humdrum second NFL season, especially in terms of quicker decision-making, better recognition of what is going on around him and especially with his ball security, which did improve from his rookie year.

The emphasis on adding playmakers produced receiver Kenny Golladay and tight end Kyle Rudolph in free agency and Kadarius Toney in the first round of the 2021 NFL Draft. All three did next-to-nothing this summer, dealing with injuries and rehab. Running back Saquon Barkley worked like a demon coming off ACL repair and, while he is not ready for a full load immediately, that time is coming. Can he beat the odds and return to greatness after reconstructive knee surgery?

The firepower is dampened unless the offensive line — no starter older than 25 — is markedly better, and the front office is rolling the dice here, with three players taken in the 2020 draft (Andrew Thomas, Matt Peart, Shane Lemieux) as centerpieces up front. If the line lives up to the confidence inside the building, Jones, with Sterling Shepard, Darius Slayton, tight end Evan Engram — who should benefit from not being the first target too often — and the return of Barkley, plus the newcomers, has more than enough. That’s a big, big “if.’’

Here is the reason why the Giants were as competitive as they were last season, and a reason why the coordinator, Patrick Graham, is high on the list of rising head-coaching candidates. The glaring weakness in 2020 was the No. 2 cornerback alongside excellent James Bradberry and that spot should be elevated with the signing of Adoree’ Jackson. This adds to what figures to be an outstanding defensive backfield, with three safeties (Jabrill Peppers, Logan Ryan and Xavier McKinney) and possibly a fourth (Julian Love) providing versatility and smarts.

Leonard Williams cashed in after a career year (11.5 sacks) and leads a front that must replace Dalvin Tomlinson (signed with the Vikings), but also has emerging Dexter Lawrence eating up space and providing a pocket push. Blake Martinez was a great free-agent pickup last year and he and Graham are in concert as far as what they want on the field.

There is concern that there is not enough talent at edge rusher, which is why Azeez Ojulari was taken in the second round, as he has major pass-rush potential. Lorenzo Carter, coming back from a ruptured Achilles tendon, is a key here, as he has the long, powerful body to make a difference. Coverage on the back end should help the pass rushers.

This is where Joe Judge made his NFL reputation and it is never far from his thoughts. Graham Gano goes down as a sensational signing, as the veteran kicker last season made 31 of 32 field-goal attempts and was 5 of 6 from 50-plus yards. He also can direct kickoffs, a staple of this coaching staff. Riley Dixon was not as good in 2020 as he was in 2019 and he is asked to do much more than punt the ball as far as he can. He has a strong leg and talent.

Kadarius Toney could be a factor as a kick returner and Jabrill Peppers is not only great at ball security on punt returns, he also can make things happen with his legs. The punt coverage a year ago and the search for a dominant gunner is ongoing, with Cam Brown in contention.

The Giants lost seven of their first eight games in the first half of Judge’s first season but they never lost hope, which is why he was widely praised for all this — an indication of the confidence he exudes with his self-assured demeanor. Judge talks fast and has cogent answers for everything, clearly well-schooled from his time working under Nick Saban and Bill Belichick. He is old-school in many ways and succeeded in getting his players to buy into his challenging program. Judge and Graham are fast friends and Graham as the assistant head coach is entrusted with a great deal.

The seat is hot for offensive coordinator Jason Garrett, who did not distinguish himself in his Giants debut after 10 years as the Cowboys head coach. Garrett is a calming presence, but he must get Jones in high gear and utilize the upgraded weapons he now has. He likes to run the ball and take his shots, and his creativity (or lack thereof) is always highly scrutinized.

Most important offensive player: It’s Saquon Barkley. Yes, quarterback is the most important position on the entire field, but the Giants do not need Daniel Jones to be great. They need Barkley to be great. He was the No. 2 pick in the entire 2018 NFL Draft for a reason. He is special. Did a torn ACL rob him of that specialness? The Giants hope not. With him running and catching with the star qualities he possesses, everything looks different, and enhanced, on offense.

Most important defensive player: Adoree’ Jackson. Note the category here. It is not Best Defensive Player or Most Valuable Defensive Player. The Giants know what they have in guys like Leonard Williams and James Bradberry and Blake Martinez. For this defense to truly come together, they need a top-flight second cornerback. Jackson, the No. 18-overall pick (by the Titans) in the 2017 draft, was signed and is paid to be that guy. His speed makes him the perfect complement to the steadiness of Bradberry.

Rookie to watch: Azeez Ojulari. Sure, receiver Kadarius Toney is the first-round pick, but the Giants do not need him to do much heavy lifting in his first year — there are older playmakers on offense for that. The defense needs Ojulari to be a contributor right away. The second-round pick from Georgia is a natural pass rusher and he needs to bring that dimension to the pass defense early, and often.

Star on the rise: The Giants were robbed of Xavier McKinney for the first 10 games of last season after the rookie safety went down at the end of the summer with a broken foot. He is back and, after a strong lead-in to the regular season, is ready to break out. He has sideline-to-sideline coverage ability and is instinctive and smart. Surrounded by a quality group of veterans, this should be a big year for McKinney, the 2020 second-round draft pick finely honed at Alabama.

Biggest coaching decision: How long does Joe Judge wait before making changes with his offensive coaching personnel? If the attack is slow out of the gate, offensive coordinator Jason Garrett will take plenty of heat. Judge has Freddie Kitchens on the staff as a senior offensive assistant and Kitchens has NFL play-calling experience. Remember, Judge replaced his offensive line coach during the 2020 season. He is not one to stand by and watch things deteriorate.

Don’t be surprised if… Nate Solder plays a bigger role than first imagined. The 33-year-old came back strong after opting out in 2020 and, other than tweaking his shoulder in training camp, looks rejuvenated. Judge has already shown he likes to rotate offensive linemen and this means Solder can get snaps at right and left tackle. If Matt Peart falters at right tackle, Solder can step into a starting role.

Sure to make fans grumble: If the offensive line is not markedly better than it has been in recent years; seeing a slow-starting Jones and the offense go three-and-out to start too many games; witnessing the back end of the defense exposed because the edge rushers cannot get home; Hearing radio play-by-play maven Bob Papa over the airwaves say, “Jones back to pass, he has Sterling Shepard open across the middle, Jones under pressure, Matt Peart beaten on the right side, the pocket collapses and Jones is sacked.’’

Sept. 16 at Washington: Week 2 comes early for the Giants, as this is a Thursday night prime-time game. A short week is always a challenge. Good thing for the Giants this is a quick train ride. Washington won the NFC East in 2020 and the Giants need to establish themselves in their own division, right away.

Nov. 22 at Tampa Bay: The Giants could have, and probably should have, upset the Buccaneers last season, as they went toe-to-toe with an NFL heavyweight, until Daniel Jones threw two killer interceptions. A “Monday Night Football” showcase against Tom Brady is always a litmus test, especially for what should be an excellent Giants defensive backfield.

Dec. 19 vs. Cowboys: You think you could get through a “games to watch’’ list and not include a matchup with Dallas in there? No chance. This is Week 15 and the Giants had better be somewhere in the vicinity of the division title or a wild-card playoff berth, or else the seats at MetLife Stadium will be purchased and filled with Cowboys fans.

The schedule sets up for a fast start — that would be something new for a franchise that opened up 0-2, or worse, four consecutive years. If the young offensive line pans out and Jones cleans up the costly mistakes, this could be a playoff team. More likely, this is an improved team that is in contention in a so-so division but ultimately does not make it into the postseason.

US ‘concerned’ as terrorists take control in Kabul – World News