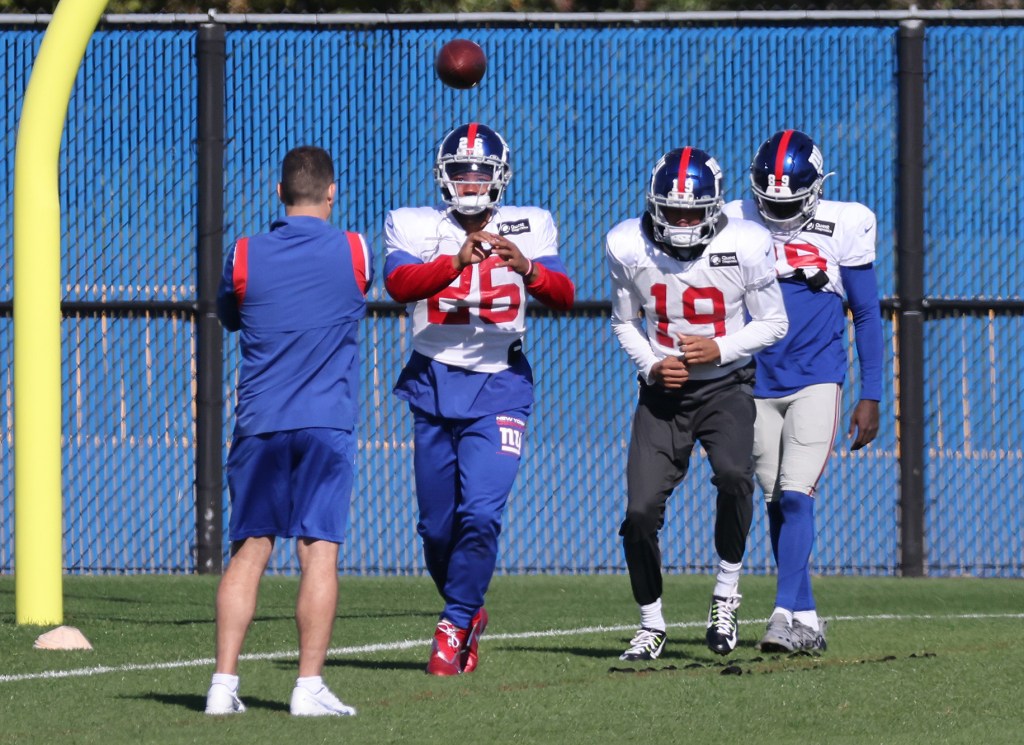 
The Giants once circled Monday on the calendar as the target return date for Saquon Barkley and Kenny Golladay.

Put a big X through it now.

Barkley (ankle) and Golladay (knee) were ruled out for Monday against the Chiefs, meaning the Giants will play a third straight game without their top running back and highest-paid receiver. Neither Barkley nor Golladay practiced all week, working with trainers when the rest of the team broke from stretching to join individual drills.

“Trending in a good direction,” coach Joe Judge said of their health. “We’ll see where it goes in the near future.”

If the Giants put Barkley and Golladay on injured reserve after they first went down against the Cowboys, it would’ve knocked them out for three games and opened up two roster spots. Instead, they were hoping for quick recoveries.

It’s not as if the gamble had an adverse effect on depth considering the Giants already have two other unfilled roster spots. The Giants play Monday and the following Sunday (Raiders) before a bye.

The Giants are expected to get back two receivers listed on the injury report as questionable: Sterling Shepard (hamstring) is a near-lock after missing three of the past four games. Judge indicated Kadarius Toney could be a game-time decision after missing the past seven quarters.

“The plan is to bring him on the trip and see where he’s at,” Judge said, “but he moved around well enough.”

It won’t be difficult for the Giants to come up with their seven game-day inactives considering five players already are out: In addition to Barkley and Golladay, LB Lorenzo Carter, LB Carter Coughlin and S Nate Ebner all are sidelined by ankle injuries. Tight end Kaden Smith (knee) did not practice Saturday and is listed as questionable.

Carter is the only defensive starter, but he only has one quarterback hit in seven games. That could mean a bigger workload for rookie Quincy Roche behind Azeez Ojulari and Oshane Ximines.

Inside linebacker Benardrick McKinney, a former Pro Bowler, is expected to be promoted from the practice squad for the second straight week.

“He brings an intensity to practice that showed up in the game last week,” Judge said.