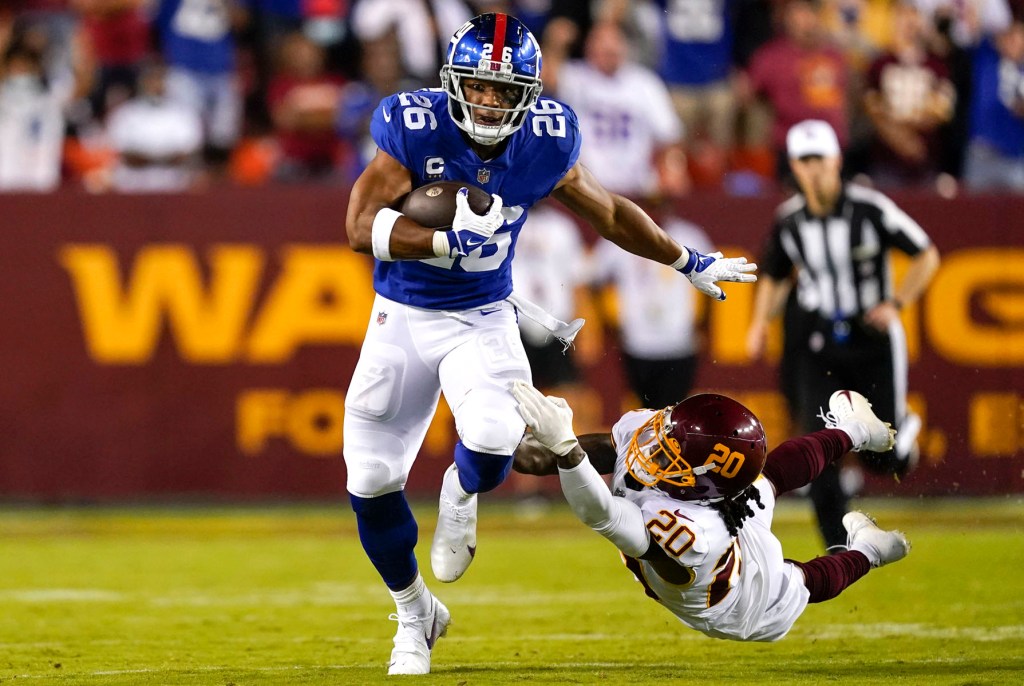 
Grading the Giants after their 30-29 loss to Washington on Thursday night.

The Giants failed to get points out of a possession that advanced into field-goal range — the fifth time that happened in the first five quarters of the season. Daniel Jones identified a flaw in the Washington defense, which kept going with the back on his run-pass options, and exploited it for a 58-yard touchdown run — or so it seemed until a questionable holding penalty. Saquon Barkley had a season-long 41-yard run but the other seven of his first eight carries netted zero yards. Jones made several tight-window throws, including a touchdown to Darius Slayton and multiple third-down dimes to Sterling Shepard. Slayton dropped a touchdown that would’ve opened up a 10-point lead with six minutes to go. One more first down at the end of the game might have allowed the Giants to run out the clock.

As always, the Giants gave up a score right before the half — this time, a go-ahead touchdown run into a pre-snap weak spot in the alignment. Washington QB Taylor Heinicke was firing high fastballs, but the Giants couldn’t corral an interception. Azeez Ojulari had an early sack — two in two games — and Lorenzo Carter would’ve had a sack if he wasn’t held to create a crucial penalty that forced Washington into a third-and-long and a field goal. Pro Bowler James Bradberry is off to a poor start, allowing a touchdown for the second straight game and committing two second-half penalties. Logan Ryan made a touchdown-saving open-field tackle when the Giants held a six-point lead. Washington grabbed a 27-26 lead by going 75 yards on two plays in 17 seconds. The Giants got the stop they needed at the end, forcing a 48-yard field-goal attempt.

Graham Gano was 5-for-5 on field goals, including a 47-yarder squeezed just inside the upright, a 52-yarder and a 55-yarder with 4:50 to go. Jabrill Peppers and C.J. Board both had turns as the punt returner and the kickoff returner. Gano gets an ‘A’ but Dexter Lawrence gets an ‘F’ for lining up offside on the final play of the game and sending the Giants to a loss.

Jason Garrett scripted an excellent first drive of mixing and matching, but his red-zone play-calling, including a second-and-8 run, after the negated touchdown left much to be desired. After it was telegraphed in Week 1 that Kadarius Toney was getting the ball when he came into the game, Toney was used as a decoy. Smart change-up, but no touches isn’t good. When the Giants scored to take a 19-14 lead with 4:41 to go in the third quarter, Joe Judge opted to kick the PAT instead of attempt a two-point conversion. Washington responded with a field goal, so it was 20-17 instead of 19-17 (yikes) or 21-17 (comfortable). Judge made the right call trusting Gano from 55 yards out rather than punting with a 3-point lead.

From ‘Succession’ to ‘You,’ the must-watch returning fall shows

Giants’ inability to close proves costly in the end