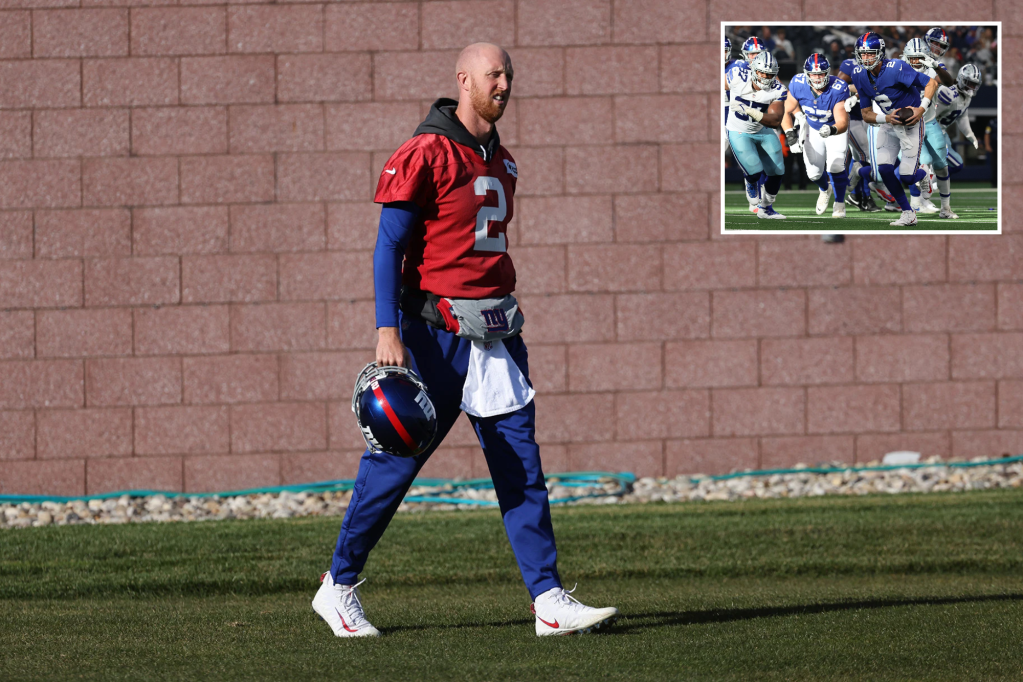 Daniel Jones has been ruled out of Sunday’s game at Miami with a bum neck, and suddenly the Giants are supposed to have only a slim chance of winning. How exactly does that work?

How does the absence of a quarterback who has lost 25 of his 37 starts, for a winning percentage of 32.4, turn what was a manageable proposition for the Giants into Mission: Next to Impossible?

When you substitute in Mike Glennon and his 6-21 career record and 28.6 winning percentage, that’s how.

It is a cold, hard NFL fact that the dropoff from the first-string quarterback to the second-string quarterback is the biggest dropoff in sports. Very few people on the planet can play the game’s most important position with any degree of success. There might be 32 teams in the league, but there are most definitely not 32 capable quarterbacks to go around. So when backups get the ball, America’s most popular game often gets reduced to an unwieldy, unwatchable mess.

But here is the one benefit to having a starter with a 12-25 career record: The dropoff to the proverbial next-man-up shouldn’t have a dramatic impact on a team’s chances of prevailing. And after 11 games of mostly uneven and uninspired performances, the Giants are way overdue to accomplish something they are not expected to accomplish — like winning two games in a row for the first time this year.

So no excuses: The Giants need to figure out how to win this game and keep their season alive. Remember, this is a franchise that once won a Super Bowl with a backup quarterback, against an opponent that would beat the 2021 Dolphins by three touchdowns.

No, Glennon isn’t Jeff Hostetler, not even close. But the point is, there are ways for mediocre and even sub-mediocre teams to win with backup quarterbacks. The Jets won a game this season with a backup, Mike White, who looked like Joe Namath on steroids against a playoff team, the Bengals. The Texans beat the Titans on the road with Tyrod Taylor throwing for just 107 yards. The Dolphins beat the Ravens with Jacoby Brissett throwing for just 156 yards.

“We have a lot of confidence in Mike,” said Giants head coach Joe Judge, who called the eight-year veteran “a true professional” who takes his preparation very seriously every week.

“We expect Mike to go in and run the offense,” Judge said.

Maybe Glennon will even run the offense better than Jones did, though that’s an awfully low bar to clear. The Giants are averaging 18.4 points per game, a stat that got Jason Garrett fired as offensive coordinator and got Freddie Kitchens promoted to play-caller. Given that the 6-foot-7 Glennon is far less mobile and athletic than Jones, and given that Judge’s former colleague in New England, Miami coach Brian Flores, loves to attack on defense, expect the Dolphins to throw the kitchen sink at Kitchens’ quarterback.

Glennon might be able to handle it, despite the fact he hasn’t won a start since 2017 and went 0-5 for last year’s 1-15 Jaguars. He looked pretty good in his one Giants appearance at Dallas, after Jones suffered a concussion, throwing for 196 yards and a touchdown in the second half. And for what it’s worth, his career quarterback rating of 83.1 is right behind Jones’s (84.3) and Eli Manning’s (84.1). Oh, and it’s ahead of Hostetler’s (80.5).

The Giants will still need to play at a high level around Glennon to make this work, and that won’t be easy without Sterling Shepard and Kadarius Toney. But as they stand one game out of the NFC’s seventh and final playoff spot, with a long list of fellow mediocrities to hurdle on the way there, the Giants should be motivated to honor the words of co-owner John Mara, who called theirs a playoff roster in the spring.

The returning Logan Ryan, two-time Super Bowl champ with the Patriots and a veteran of 15 postseason games, said last week’s ugly victory over Philadelphia was reason to hope that the Giants can still qualify for the tournament.

“A playoff team needs to be a team that’s resilient,” he said. “It doesn’t matter how it went. … A team like Miami, who lost seven straight, they just won four straight. They’re playing as well as anybody in football right now at finding ways to win. A playoff team finds a way to win — ugly, pretty, whatever it is. Last week was a good example of that. … You’ve got to play well at the right time, and this is the time that matters.”

This is the Sunday that the Giants need to become relevant again. They are not playing Don Shula’s 1972 Dolphins. They are playing a beatable team that they need to handle, and no, a backup quarterback doesn’t qualify as an excuse to fail.