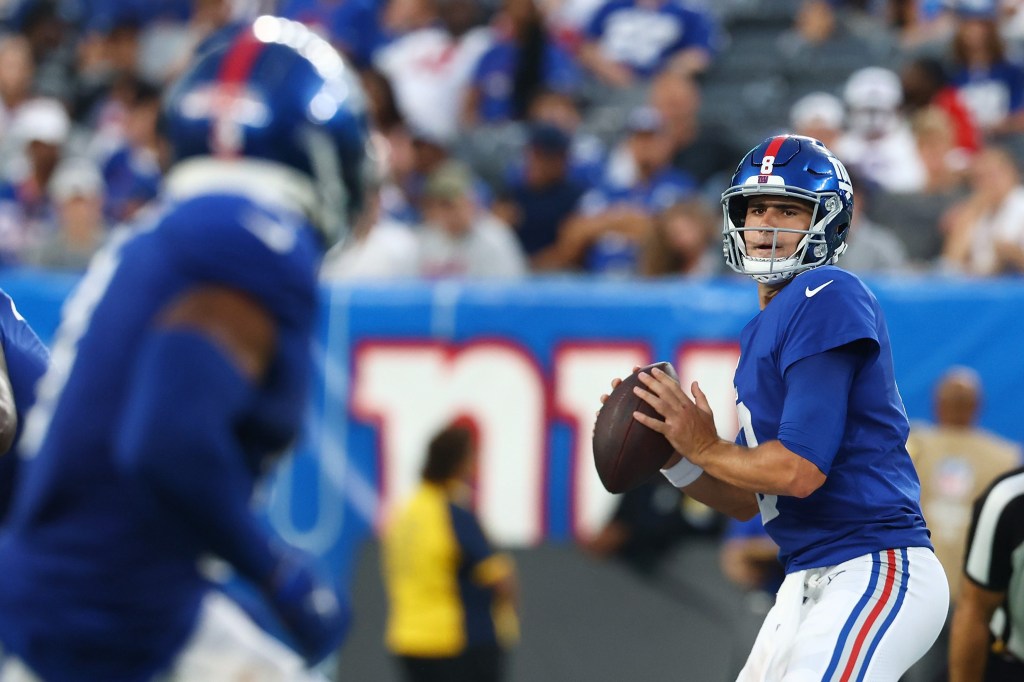 The Giants on offense look ready for the 2021 season — if their goal is to resemble the 2020 version they put on the field.

That version, if you recall, was pretty bad.

This was the one and only preseason game for Daniel Jones and the 24-year-old quarterback Sunday night hoped to inject everyone associated with the team with some good vibes before the summer fades away and the real thing begins. Other than one horrid decision and throw, Jones was just fine, but the protection in front of him too often was shabby — where have we heard this before? — and concerns have to linger as far as what product the Giants will put out there.

The Giants’ starters on offense and defense played the first half and took a 7-6 lead into halftime. The Patriots ended up winning 22-20 at MetLife Stadium.

Simply put, if Andrew Thomas is going to play like this, the Giants are in big, big trouble. The second-year left tackle allowed two sacks and one quarterback hit on the first two series, caving in and putting Jones in harm’s way. This is unacceptable, as the Giants have too much invested in the 22-year-old Thomas to consider any other plan for the key position on the line.

In five offensive series, Jones and a starting unit minus most of the marquee playmakers managed only one touchdown, a 23-yard dart from Jones to tight end Kaden Smith late in the second quarter, completing a strong two-minute drive. Jones was mostly on target, finishing 17 of 22 for 135 yards.

Jones committed one quarterback sin, when on third-and-goal from the Patriots 1-yard line he rolled to his right and looked for tight end Evan Engram in the end zone. The pass was far behind Engram and cornerback D’Angelo Ross was able to come away with a diving interception. It was the sort of unnecessary turnover Jones must purge from his game, as it cost the Giants points.

Jones took the field without the new toys the front office got for him, as receivers Kenny Golladay, Kadarius Toney and John Ross are all coming back from physical issues. Saquon Barkley is not yet ready for a game and did not play. The same with tight end Kyle Rudolph. So, Jones had Sterling Shepard and Slayton as his starting receivers, the same duo he worked with in 2020.

The start was ugly. The first rushing attempt for Devontae Booker went for a 1-yard loss. The first third down of the game for the Giants resulted in a 6-yard sack of Jones, with linebacker Josh Uche beating Thomas.

As the No. 4 pick in the 2020 NFL Draft — and the first offensive lineman taken — Thomas struggled for much of his rookie year, dealing with an ankle issue, but he rebounded and was much better down the stretch. He was not better in this tuneup. On the second offensive series, Thomas was beaten by Ja’Whaun Bentley for a sack.

Changes on the offensive line created an interesting scenario, two weeks before the games count for real. Matt Peart lined up at right tackle with the starting unit all summer but he did not do so in the preseason finale. He was replaced by veteran Nate Solder, who has 127 starts in the NFL, almost all at left tackle.

Solder, 33, opted out the 2020 season and returned after accepting a hefty pay cut to remain on the roster. His role? Serve as the backup swing tackle, providing insurance for Thomas on the left side and Peart on the right side. The front office and the coaching staff wanted to see Peart elevate his performance after a promising rookie year — he got on the field for 150 snaps on offense — and Peart lined up as a starter throughout training camp. He did not fare particularly well last week in two joint practices with the Patriots in Foxborough, Mass., and was not solid enough in this game.

Shane Lemieux, the starting left guard, is dealing with the lingering effects of a knee injury and did not play. Kenny Wiggins, a veteran free-agent pickup, had been starting in place of Lemieux, but for this game, another veteran, Ted Larsen, 34, started at left guard.

Peart and Wiggins came into the game late in the first quarter and worked with the starting unit.