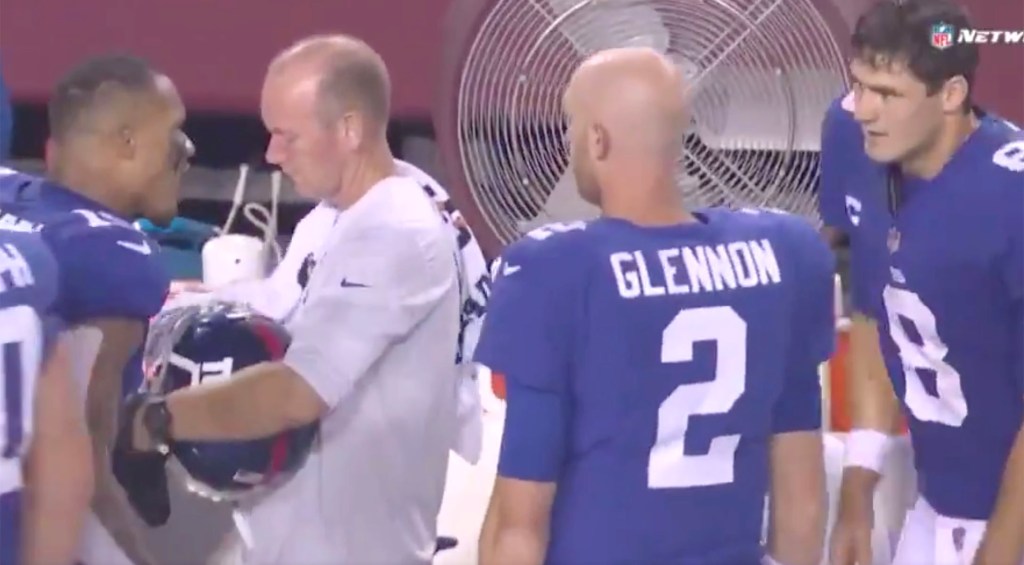 
Kenny Golladay endured another quiet game for the Giants, except for what appeared to be a shouting match on the sidelines late in their last-second 30-29 loss Thursday night in Washington.

The $72 million free-agent signing appeared to get into a brief, but heated, discussion with quarterback Daniel Jones in the closing minutes after the Giants went conservative following a late interception by James Bradberry in Washington territory. After two runs and an incomplete pass following Bradberry’s pick, the Giants took a 29-27 lead on Graham Gano’s fifth field goal of the game.

“I just saw the guys hugging in the locker room a second ago, so that’s the first I’ve heard of it,” Giants head coach Joe Judge said when asked about the sideline spat caught by television cameras.

The 27-year-old Golladay finished with three receptions on eight targets for 38 yards, one game after the former Lions wideout four catches for 48 yards in his Giants debut in Sunday’s loss to the Broncos.

“I think he was frustrated with the situation. I don’t really think it was to me or anyone in particular,” said Jones, who finished with 249 passing yards and a career-best 95 yards on the ground. “So I think we’re all good. I love Kenny. I thought he played hard and we did a lot of good things out there.

“I’ve got to do a better job of finding him in some places. He was just frustrated, frustrated with the situation and we’ll be better from it. He plays hard and wants to win and wants to do the best for the team.”

Asked if the gist of the conversation was Golladay wanting the ball thrown his way in key situations, Jones replied: “I think that’s part of it. You certainly want receivers that want the ball. We’ll keep working through it.”

Sterling Shepard led the Giants with nine receptions for 94 yards, while Darius Slayton finished with three catches for 54 yards including a 33-yard touchdown grab and a key drop in the end zone later in the fourth quarter.

Asked about Golladay yelling at Jones on the sidelines, Shepard replied: “I think you guys have that all mixed up. It was just heated in the situation. We needed some big plays and it was heated in the situation. We all love each other. That’s what happens in this game, your emotions get into it. You say what you got to say and you move on. We all love each other. We dap it up at the end of the day, and give each other a hug and keep on pushing.”

‘The Eyes of Tammy Faye’: How a Bible thumper became a gay advocate and icon