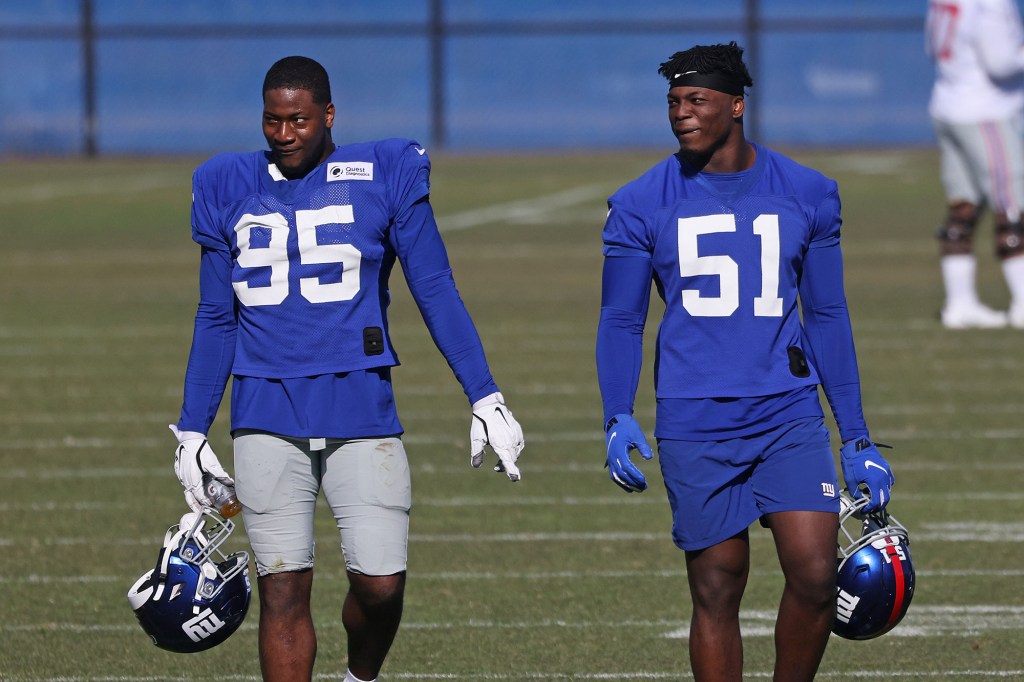 
A strange thing happened when the Giants turned to three rookies and an unknown player elevated from the practice squad to provide pressure off the edge last Sunday.

Giants head coach Joe Judge often talks about how draft status and contract size are irrelevant when it comes to earning playing time, but he put the words into action against the Raiders when the Giants started waivers-claim Quincy Roche (a 2021 sixth-round pick by the Steelers) next to second-rounder Azeez Ojulari. Oshane Ximines was a healthy roster scratch for the first time in favor of fourth-rounder Elerson Smith, who made his NFL debut, and Trent Harris, who has been cut six times by three teams over four years.

“Those three young guys are really coming around and developing,” Judge said. “There are multiple roles that come into every game plan and you can only take so many guys into the game, so you’ve got to consider offensive and defensive value, along with the kicking game.”

Ojulari, Harris and Roche combined for five pressures, highlighted by Roche’s victory-clinching, last-minute strip-sack. There was no need for anyone to make excuses about all the other ways edge rushers can impact a game, as often was the case for Ximines and injured starter Lorenzo Carter. In the seven games in which Ximines and Carter played together this season, they didn’t total five combined pressures once.

Ojulari — with 5.5 sacks on 404 career defensive snaps — suddenly became the game-day dean of the outside linebackers. Smith, who was slow to return from a July hamstring injury, debuted only on special teams.

“We all try to grow with each other,” Ojulari said. “Whatever we see out there, we communicate the tips.”

The Giants will face an interesting decision after the bye. Carter (ankle) could be ready to return following a two-game absence, but is it smart to take away snaps from younger or more productive players? Or is it time to embrace a changing of the guard? Since he tallied four quarterback pressures on 25 pass-rushing snaps in Week 1, Carter has four more on 121 snaps over six games.

“All these rookies are truly learning the game,” Judge said. “Pass-rushers on the edge, you look at these guys throughout the league throughout just time, it takes a little while to get caught up.

“There’s a big difference between playing against the tackles and the protections in the NFL versus college. Normally, it’s tough to get these guys off the spot and just go ahead and walk across their face, so you have to [know] what’s your main move? What’s your change-up? What can you go to in the situation?”

Carter and Ximines — third-round picks in 2018 and 2019, respectively — combined to miss 23 games with major injuries last season and it would be a surprise if either returned to the team next season.

Harris, on the other hand, went undrafted in 2018, but just was named the Giants’ special teams player of the week. He cannot be promoted from the practice squad again (each player is limited to two promotions per season), but is likely to sign to one of the four empty 53-man roster spots this week.

“He’s a guy that stays ready,” Judge said, “whether it’s short notice or he’s kind of in limbo sometimes. He’s done a great job for us the last two weeks stepping up and being ready and being productive.”

Six days before he was inactivate against the Raiders, Ximines negated a teammate’s interception by jumping offside late in a tie game against the Chiefs. It’s easy to draw a straight line between the two as a warning to the team to stop making foolish mistakes. But it’s not that simple, Judge explained.

Teammates only cared about Ximines’ unselfish reaction to his demotion, whether temporary or permanent.

“Me and him were coming off the bench together,” Roche said, “so that was the guy who was helping me through the playbook, helping guide me through everything, so he’s been nothing but supportive.”

Supportive is important. But, if the Giants are going to make a second-half playoff run, they need to stick with the productive.

“I’m just trying to make the best of my opportunity,” Ojulari said. “Everyone is trying to play as hard and as fast as we can.”

Why Dean Martin was the ‘King of Cool’