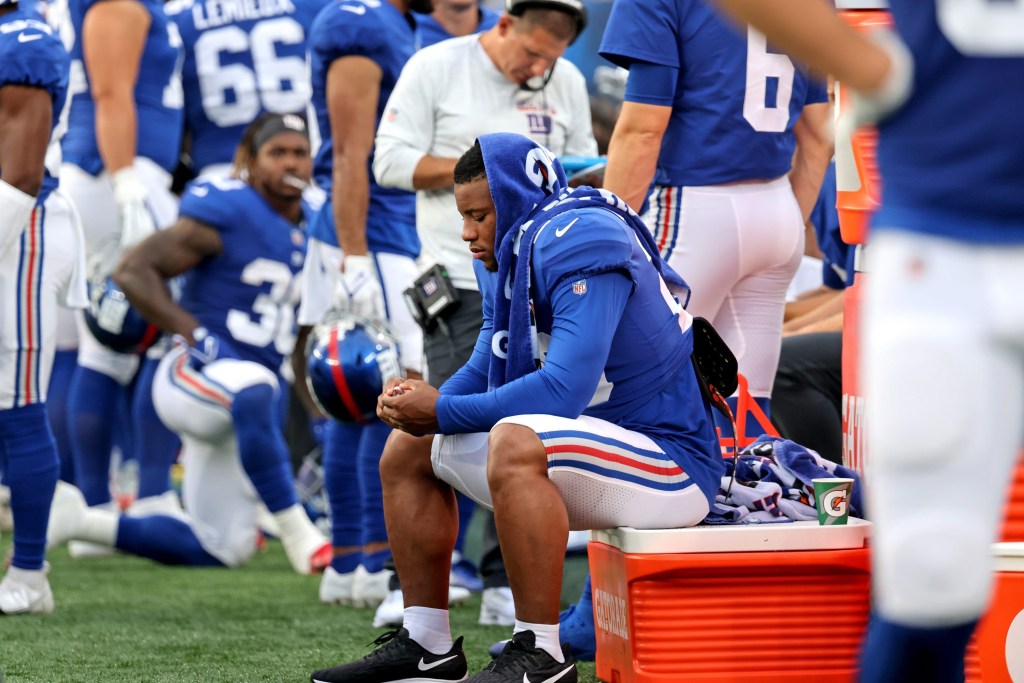 Training camp in the NFL is for acclimation and repetition. It’s a series of weeks meant to prepare teams for the upcoming season.

Ideally, teams answer questions about themselves by the end of camp.

It’s not unfair to wonder whether the Giants have answered a lot of the most critical questions they faced at the start of camp as their season opener fast approaches a week from Sunday against the Broncos at MetLife Stadium.

Do we really know whether quarterback Daniel Jones, a year removed from throwing a mere 11 touchdown passes in 448 pass attempts, is ready to make the crucial leap forward the Giants need him to make in his make-or-break third season?

Jones, who owns an 8-18 won-loss record as a starter in his first two seasons, hasn’t really looked like any different a player than he was in those first two years while playing a handful of preseason-game snaps last Sunday and in those controlled scrimmages against the Browns and Patriots.

Running back Saquon Barkley, coming off his torn ACL, has spent the summer in Bubble Wrap wearing a “do-not-disturb’’ red jersey in the few moments that he has participated in full-team practices.

So, Barkley hasn’t taken a hit yet. Giants coach Joe Judge said recently that he won’t play any of his players in a game until they’ve taken a hit. So, with Barkley not having played a snap in a preseason game, presumably that time will come in practice in the coming days from one of his teammates.

If, that is, he’s ready to play in the opener — something Judge has yet to commit to publicly.

Whenever Barkley does return to a game, no one — not even him — knows whether he’ll be the same player he was before he was injured.

Receivers Kenny Golladay, a high-profile offseason free-agent signing, and Kadarius Toney, the 20th pick in the draft’s first round, have practiced with the team for what feels like five minutes this summer.

Golladay, who came to the Giants labeled as injury-prone having missed 11 games in 2020 with the Lions, has been hampered by a hamstring injury for much of camp. Toney contracted COVID-19 early in camp and has dealt with an undisclosed injury as well.

Neither played a down in any of the three preseason games, which of course is not ideal considering they’re first-timers with Jones and quarterback-receiver chemistry is critical.

“It’s always unfortunate when players get hurt,’’ Judge said Wednesday. “But I’d say in terms of the way I view it … September is really an extension of preseason in a lot of ways. Obviously, it counts toward your record in the regular season, but throughout September, you’re really figuring out your team.’’

The question is whether the Giants can afford to be “figuring out’’ their team in September?

“It’ll be a part of the process of us really identifying what we’re doing well, things we have to overcome and keep improving as we go through it,’’ Judge said. “To me, you’re never a final product to begin with, especially not early in the year. It’s about going out there, having good fundamentals, giving yourself a chance with execution and operating in the situations.’’

Asked what he wants and expects the identity of his offense to be, Judge said, “Smart, tough and fundamentally sound.’’

“We’ll see where it goes. You don’t really have the answers at this point in the year. You’ve got to go with your base fundamentals of what you’re doing. You’ve got to build on and really think more about the players you’re playing with and what they do well, then some magical scheme that you’ve got. I mean if we all had Mr. Coach Klein’s magical playbook from ‘The Waterboy’ then we’d all be pretty good, but it’s really about the players on the field. That’s what we’ve got to go ahead and rely on, is what they do well.’’