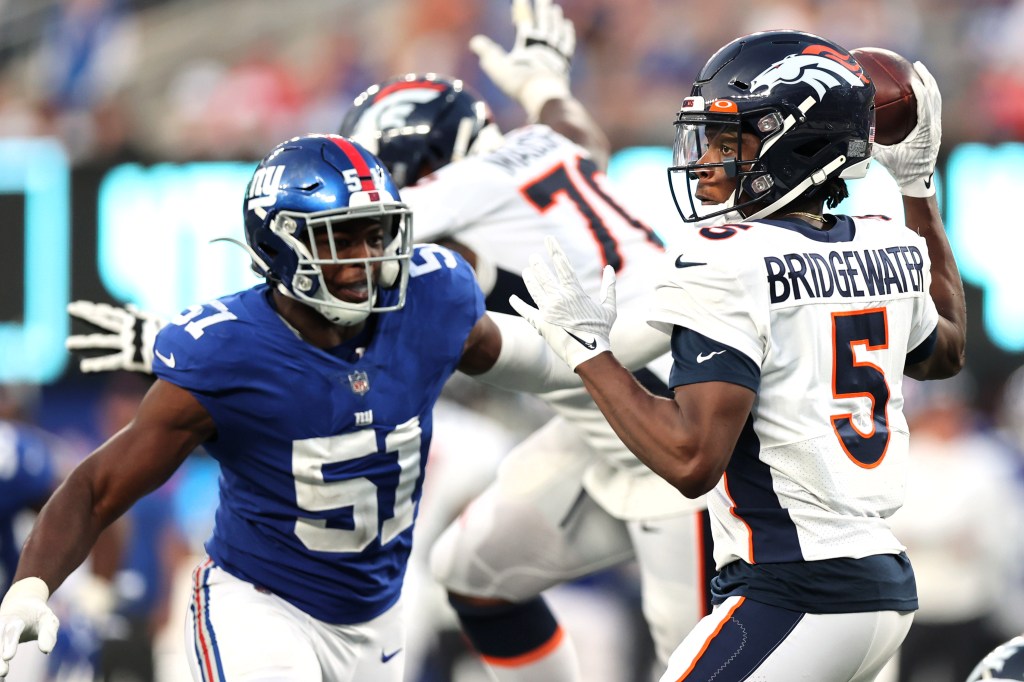 The stunner wasn’t Daniel Jones fumbling away a chance to win the opener. The stunner was how the Giants defense was embarrassed by Teddy Bridgewater.

On Thursday night inside FedEx Field, a Big Bad Big Blue needs to show up, show up angry and refuse to let Taylor Heinicke breathe.

This isn’t about providing cover for Jones and a rusty Saquon Barkley, even if that might not be a bad idea right now.

This is more about imposing your will on the night, and letting Joe Judge soak in the sounds of a hushed stadium like Bill Parcells once did.

Judge and his DC Patrick Graham cannot call on Lawrence Taylor to terrorize Heinicke, or Michael Strahan, or Osi Umenyiora, or Justin Tuck, and they don’t have Harry Carson or Carl Banks as enforcers.

But this is a defense that should be expected to take no prisoners against a backup quarterback, albeit a dangerous gunslinger backup quarterback, a defense in its second year under Graham, a defense fortified by the free agent signing of CB Adoree’ Jackson as James Bradberry’s bookend. A defense with enough beef up in front of tackling machine Blake Martinez to finish as the 10th-ranked run defense in 2020.

It would be nice if someone – anyone – could rush the passer. Leonard Williams (six pressures against Bridgewater) picked up where he left off last season but needs help, perhaps from rookie Azeez Ojulari showing why he was arguably the best pure pass rusher in the draft, or Lorenzo Carter finally shedding the enigma label. The Giants won’t be an elite defense without a feared predator, but armed with a formidable secondary, Graham will be asked to scheme his way to the quarterback. If he could leave Russell Wilson flummoxed last season, you would expect him to give Heinicke fits.

For Big Blue, there is historical precedent in this rivalry. The Super Bowl XLII Giants had surrendered 80 points in their first two games under DC Steve Spagnuolo before making a goal-line stand at the 1 in the final minute at FedEx Field for a 24-17 victory that prevented a demoralizing 0-3 start.

“We were really fed up with all of the things that have been said about us,” Osi Umenyiora said afterwards. “We knew we were better than we played. It’s a new system, so we just had to come together as a defense and this is the start of something good.”

“Amazing way to win a game,” Eli Manning said. “Give a lot of credit to our defense for hanging in tough. To get a goal line stand to win a game, you can’t beat that.”

In the days leading up to the Giants’ 1986 NFC Championship Game against Washington — a 17-0 demolition at a wind-blown and delirious Giants Stadium, Parcells had said: “Defense keeps you in the game. There are going to be some days when the offense doesn’t play that well. If the defense plays well, that gives you a chance.”

Giants punter Sean Landeta, unfazed by the 30 mph gusts, was an unlikely hero on a day when Washington quarterback Jay Schroeder completed 20 of 50 throws.

“Our defense played like a school of piranha waiting for someone to stick their foot in the water. They chewed them up,” G Chris Godfrey said.

Jones, for all his success (4-0, 100.0 passer rating) against Washington, better get the ball out quickly against Chase Young and Montez Sweat. More power to him if he lights up the scoreboard. But that isn’t the estate to bet. Big Bad Big Blue better have his back.

Royals’ Jake Brentz may have thrown the worst pitch ever