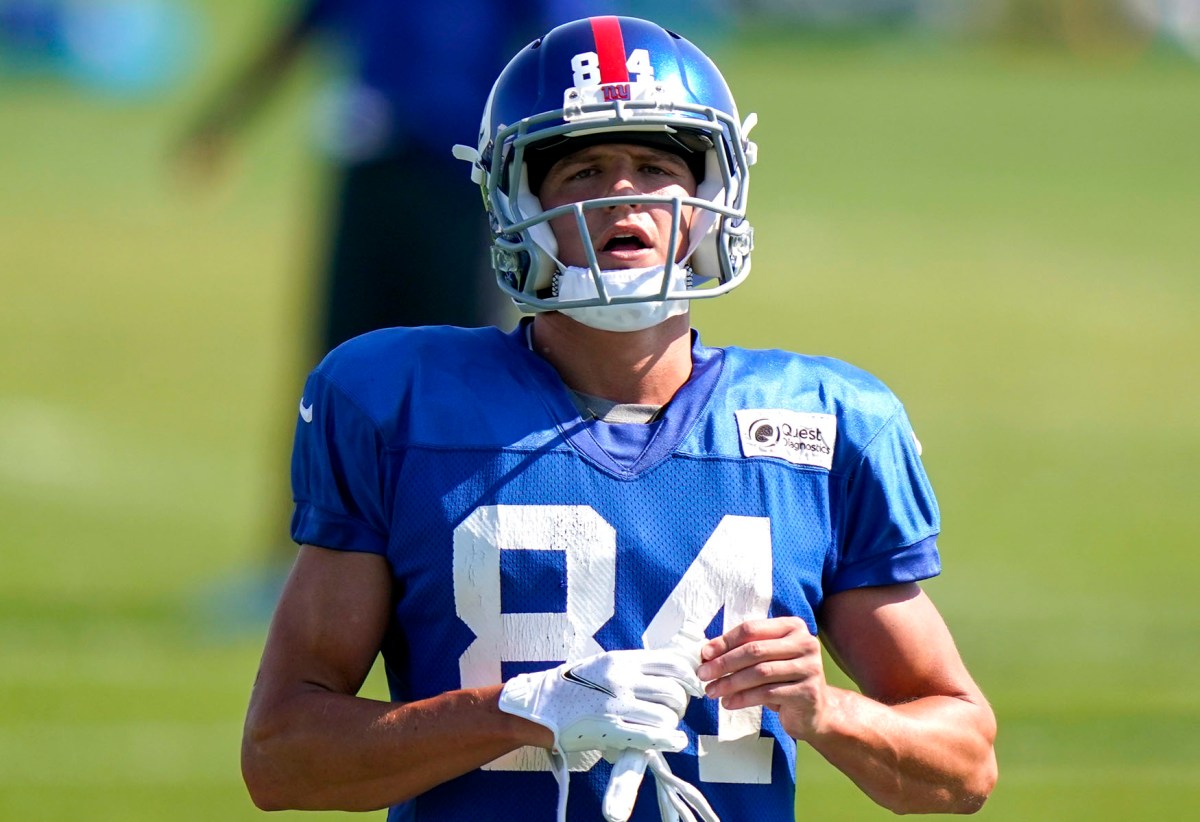 
David Sills’ rise with the Giants can be traced to two smart offseason decisions: Taking over the spare bedroom at his sister’s house and signing up for an airline miles rewards account.

That’s how Sills attached himself to the hip of Daniel Jones — a connection that has paid off during training camp because the receiver with zero games played over his first two NFL seasons is one of the favorite targets of the starting quarterback.

“Basically, this guy followed Daniel around the country,” Giants head coach Joe Judge said. “Wherever Daniel was, he was going to be there to catch passes. That’s someone who you can tell has really invested in himself to give it every shot he has.”

Jones spent most of his offseason in Charlotte, N.C., where Sills’ sister and brother-in-law happen to reside. So, the duo threw on local fields around the city. They also met up with Giants teammates to train in Scottsdale, Ariz., and went to see Jones’ private quarterback coach in Mobile, Ala.

“It was to build a relationship with him,” Sills told The Post. “I know how hard of a worker he is. Any time he needed someone to throw to, I was there to build timing with him so he can have trust in me that, when the ball is in there, I’m going to be able to make a play for him.”

The connection began to form last summer, when Sills was so impressive that he went from roster afterthought to possibly on the right side of the cut from 90 players to 53. And after a positive COVID-19 test entering camp, no less.

But, in the second-to-last practice of camp last year, Sills broke his foot. And the Giants broke his heart by putting him on injured reserve, rendering him ineligible to return during the season. He credits the training staff for a recovery timetable that allowed him to go into the offseason without restrictions

“It was an injury that I thought was more of a bone bruise,” Sills said. “Usually with a broken bone, you can’t really walk. I was like, ‘It’s probably fine, and I’m just getting an X-ray because of precautions.’ When they told me it was broken, my heart went into my stomach.”

Sills stayed around the team facility through the final week of last season, providing a boost of energy during the dog days. It gave him locker-room time to ingratiate himself into Jones’ inner circle with New Jersey residents Saquon Barkley and Sterling Shepard. That was another stop on the offseason cross-country tour.

“I definitely have airline miles I’m building up,” Sills said. “But I like driving, too.”

It’s not hard to picture the Giants driving down the field and Jones looking for the 6-foot-3 Sills in the red zone, not after he caught two touchdowns in a practice earlier this week, one of which required jumping over Adoree’ Jackson and tapping his feet in the back of the end zone. Offensive linemen Andrew Thomas and Will Hernandez ran down for celebratory shoulder bumps.

“He’s making a lot of plays for us,” Judge said. “Sills does everything you ask, and he does it 100 percent. He’s definitely a guy you’ve got to tell, ‘Hey, slow it down a little bit.’ ”

The Giants’ top four receivers are set, with Kenny Golladay, Sterling Shepard, Kadarius Toney and Darius Slayton. Because only Toney might play a big role on special teams and all have injury histories, the Giants probably will carry two more between Sills, John Ross, Dante Pettis and C.J. Board.

“One thing about me being a big receiver is it’s a friendly throw for the target,” Sills said. “He trusts that, when the ball is in the air, I’ll be able to adjust if it’s a little bit off because of my longer frame. But I try to be whatever kind of receiver they need me to be.”

Sills is a former prized USC quarterback recruit who became a receiver at West Virginia and went undrafted. He has taken the long road to the NFL — traveling a lot of miles.

“I tried to put my best foot forward every day last camp, and I’m trying to have the same approach,” Sills said. “I’m excited to have preseason games this year. Getting in that game-day environment will be exciting, but any time we’re out here is a time to show your skills.”