Georgia shuts down Clemson in battle of Top 5 teams 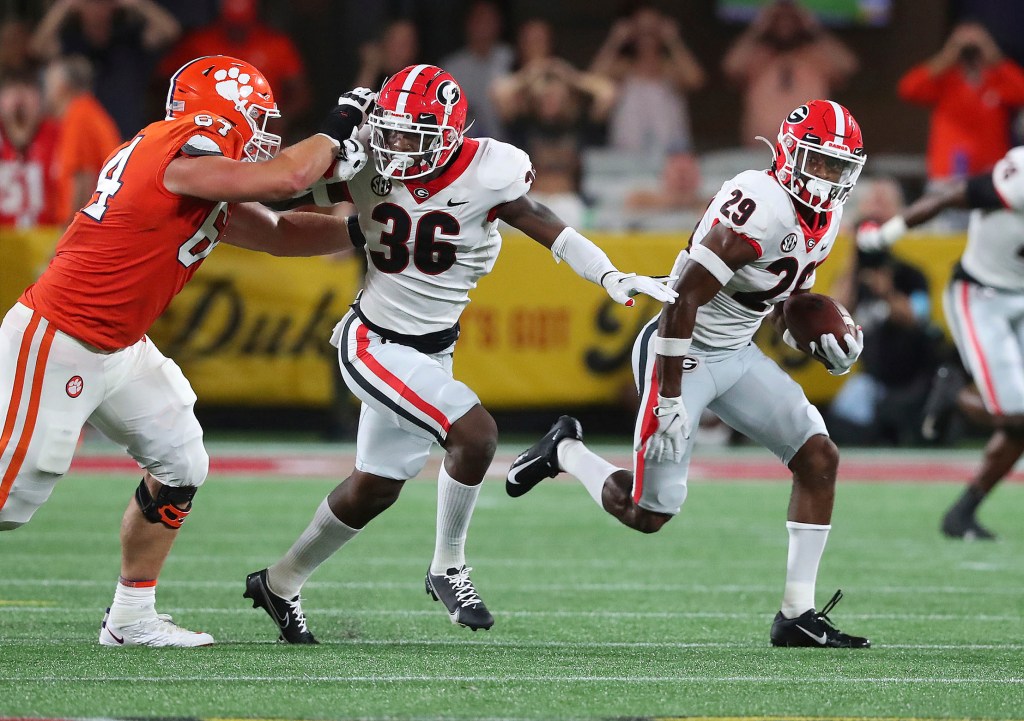 
CHARLOTTE, N.C. — Christopher Smith returned an interception 74 yards for a touchdown and No. 5 Georgia turned in a defensive effort for the ages, toppling third-ranked Clemson 10-3 on Saturday in the opener for both teams.

The Bulldogs held the Tigers to 2 yards rushing and sacked D.J. Uiagalelei seven times to position themselves for a run at the College Football Playoff.

Uiagalelei, who entered the season as a Heisman Trophy candidate, finished 19 of 37 for 178 yards with one interception. He bobbled snaps, was out of sync with his receivers and spent most of the day under heavy duress against a relentless Bulldogs pass rush.

One of the concerns entering the game was how Clemson was going to replace the production of running back Travis Etienne. Tigers running backs Kobe Pace and Will Shipley combined for just 14 yards on eight carries.

“We frustrated and confused them,” Georgia coach Kirby Smart said.

Even when Georgia turned the ball over, the Tigers, who were held to 180 total yards, couldn’t take advantage.

With Clemson down 7-0 in the third quarter, Baylon Specter appeared to give the Tigers they momentum they needed when he intercepted J.T. Daniels’ pass at the Georgia 33. But after a short gain on first down Uiagalelei was sacked on consecutive plays and Clemson was forced to punt.

Clemson didn’t score until 9:08 left in the game when a 44-yard reception by Joseph Ngata an a defensive pass interference penalty set up a 22-yard field goal by B.T. Potter, helping the Tigers avoid their first shutout since 2003.

Despite being dominated all game, the Tigers had a chance to tie with 7:35 left when they took over at their own 25. The Tigers reached midfield and head coach Dabo Swinney went for it on fourth-and-5 — but Uiagalelei’s hurried pass fell incomplete.

“I knew we were would be pretty good and pretty deep on defense,” Smart said. “But we’re more athletic than when we were in the past.”

From there, the Bulldogs ran out the clock.

In a first half dominated by defense — and some pretty impressive punting — it was only fitting the only score came when Smith jumped in front of a Uiagalelei pass intended for Justyn Ross and raced 74 yards to the end zone to give the Bulldogs a 7-0 lead at halftime.

Swinney layed the blame on Ross making a bad decision on the route, saying he was supposed to “sit down” on the route but instead kept running.

“He didn’t make the right decision and it was a critical play,” Swinney said.

Daniels had a pedestrian day for Georgia, completing 22 of 30 passes for 135 yards with one interception, but walked away with a smile on his face saying, “We just beat Clemson, so I’m happy.”

The loss leaves Clemson with almost no room for error when it comes to making its seventh straight College Football Playoff. No team has ever made the playoff with two losses since the new four-team format began in 2015.

“I’m not going to write the season off because we lost 10-3 to a top-five team,” Swinney said.