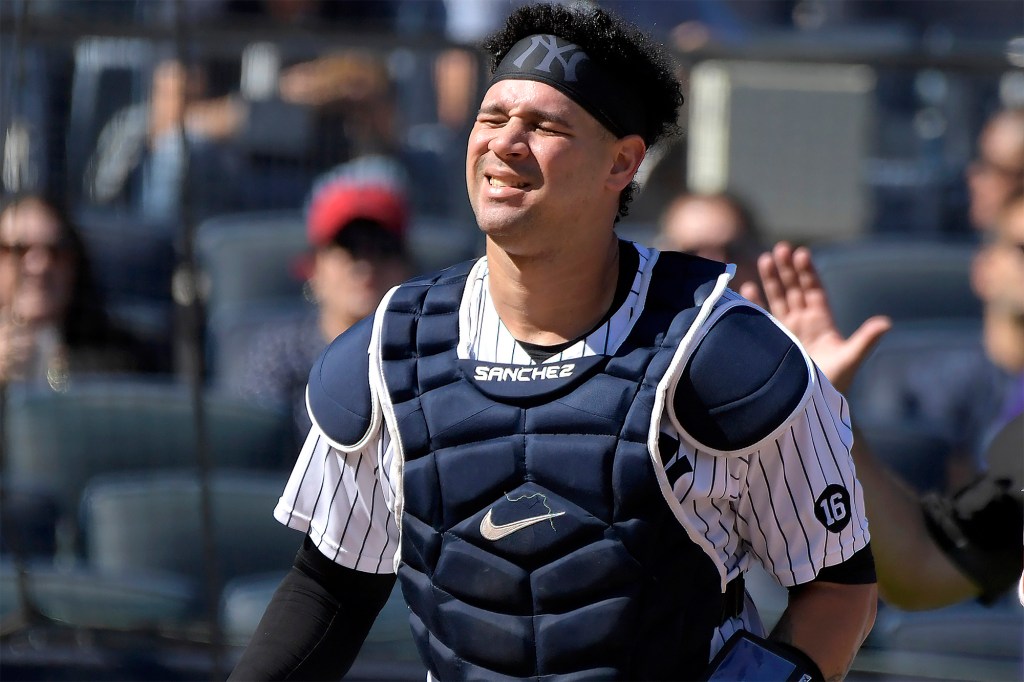 
Gary Sanchez looked into the sun and lost the ball.

It gave way to an inning that lost the Yankees the game.

The floodgates might have eventually opened even if Sanchez had caught the ball, but his error greased the way to a seven-run inning that sank the Yankees in a stinker of an 11-3 loss to the Indians on Saturday afternoon in The Bronx.

On a day when they also lost Joey Gallo after three innings due to neck tightness, the Yankees (83-66) dropped a game to the victorious Red Sox, who moved 1 ½ games ahead of them for the first wild card, while the Blue Jays threatened to leapfrog them into the second spot, pending their game against the Twins.

Less than 24 hours after they crushed five home runs in an 8-0 win over the Indians (72-74), the Yankees were held in check by right-hander Aaron Civale, who tossed six shutout innings.

Yankees rookie right-hander Luis Gil battled some command issues through the first four innings, but had limited the damage to just a solo home run by Yu Chang in the second inning.

Gil retired the first batter he faced in the fifth and appeared to have the second out when he got the next batter, Oscar Mercado, to sky a foul pop-up behind the plate. But Sanchez, battling the sun, reached back and was unable to catch the ball as it dropped for a foul.

On the next pitch, Gil hit Mercado on the hands with a pitch. He then walked Jose Ramirez on four pitches to end his day.

Albert Abreu replaced Gil and immediately gave up an RBI double to Franmil Reyes for a 2-0 deficit.

After Abreu hit Harold Ramirez with a pitch to load the bases, Chang drilled a two-run double. Owen Miller then grounded a single up the middle with the infield in to make it 5-0.

The crowd of 39,088 gave Sanchez a Bronx cheer when he caught a foul pop-up by Austin Hedges for the second out. But the next batter, ex-Met Andres Gimenez, pounded a three-run homer that put the Indians ahead 8-0.

Sanchez’s misplay continued his rough couple of days behind the plate. On Thursday in Baltimore, Sanchez failed to stop two wild pitches (including one when the Yankees were one strike away from a win) in the ninth inning of what turned into a crushing loss to the Orioles.

Following Cleveland’s seven-run fifth, Andrew Heaney mopped up the next three innings to spare the Yankees’ bullpen, but he gave up two more home runs — one after a throwing error by third baseman DJ LeMahieu — as the Indians padded their lead.

The Yankees avoided a shutout when Giancarlo Stanton crushed a solo home run in the seventh inning, his 30th of the season, to make it 10-1.

Luke Voit added a two-run homer in the eighth inning to cut the deficit to 11-3.

‘Lovecraft Country’ and other canceled shows that got Emmy nominations