From ‘Cowboy Bebop’ to Will Ferrell, must-watch fall TV 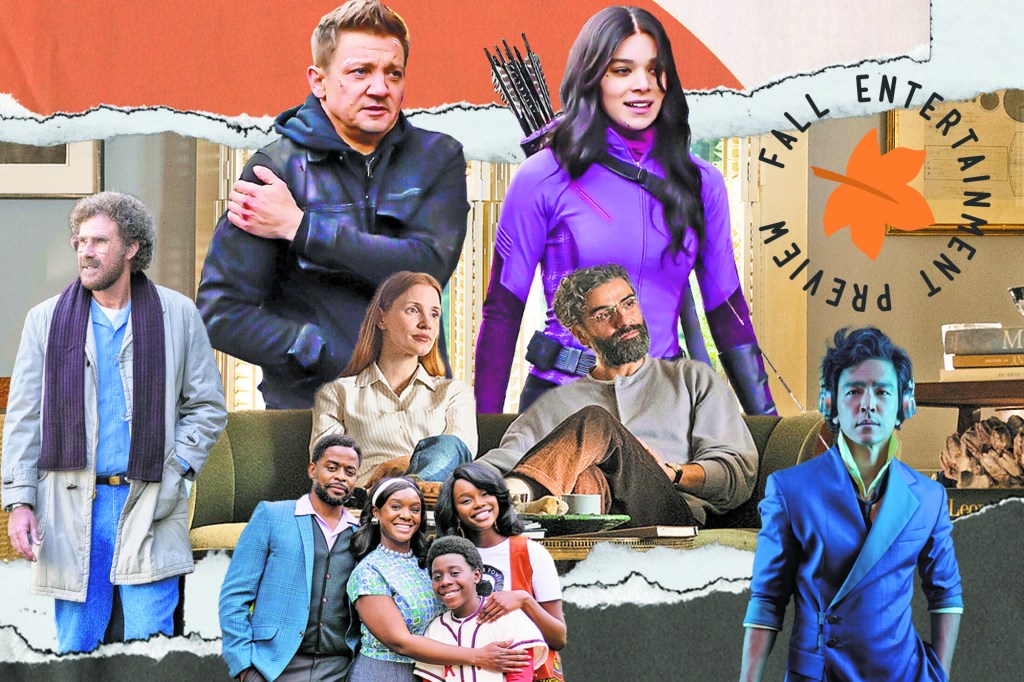 
There are no shortage of star-studded casts to watch from the comfort of your couch this season.

Now that TV production snags due to COVID-19 are in check, the usual big slate of fall TV shows has returned.

The new prime-time season is packed with a slew of offerings, from quiet dramas to sci-fi epics to mysteries and, yes, yet another Marvel Comics show.

Here are the hot new shows to look out for.

The latest Ryan Murphy show dramatizes the infamous impeachment of President Bill Clinton in 1998 (starring Clive Owen as Bill) and Monica Lewinsky’s role in the saga (starring Beanie Feldstein as Monica). Lewinsky herself is a producer.

Scenes from a Marriage

Based on the 1973 Swedish miniseries of the same name, this five-episode drama chronicles the ups and downs of 40-something couple Jonathan (Oscar Isaac), an academic, and tech exec Mira (Jessica Chastain) as their relationship weathers infidelities and trauma through the years.

This is for fans of “Mare of Easttown.” Set in a Pennsylvania town in the titular Rust Belt region, this drama stars Jeff Daniels as a conflicted police chief who must protect the son of the woman he loves (Maura Tierney, “The Affair”) after a murder shakes up their town. It’s based on a 2009 novel of the same name by Philipp Meyer.

Based on a comic series by Brian K. Vaughan, this post-apocalyptic epic is set in a world where a cataclysmic event killed every mammal with a Y chromosome except for one man, Yorick (Ben Schnetzer). Diane Lane stars as Yorick’s mom, Jennifer Brown, the new US President, with Olivia Thirlby (“Juno”) as Yorick’s sister, Hero. Amber Tamblyn also co-stars.

Ashley Zukerman (“Succession”) takes over the role of Harvard professor and symbol expert Robert Langdon, played by Tom Hanks in “The Da Vinci Code,” “Angels & Demons” and “Inferno” movies. This story follows a younger version of Langdon, who becomes ensnared in a mystery involving Freemasons, the US Capitol, a severed hand, and — you guessed it — lots of mysterious symbols.

Similar in vein to the 1998 Gwyneth Paltrow movie “Sliding Doors,” it follows Joe (James Wolk, “Watchmen,” “Mad Men”) on parallel timelines if his life went different ways. His paths include life as a nurse after marrying the woman he loves; life as a police officer, following in his father’s footsteps; and as a musician.

Piper Perabo and Scott Foley headline this musical dramedy about a group of down-on-their-luck characters who are participating in a reality dance show that might ruin their lives.

Our Kind of People

Hailing from Lee Daniels, this drama follows wealthy families in Martha’s Vineyard for a soapy romp. Think “Empire” meets “Succession.” Yaya DaCosta (“Whitney”) stars a single mom Angela Vaughn, who tries to reclaim her family name and uncovers secrets about the past.

Inspired by the 1988 sitcom of the same name starring Fred Savage, this new rendition follows the Williams, a black middle-class family in Montgomery, Ala. in the 1960s. It’s all told through the eyes of 12-year-old-Dean (Elisha Williams). Don Cheadle narrates as an older version of Dean.

Starring Lee Pace and Jared Harris (“Chernobyl,”) this sci-fi epic is based on a book series by genre giant Isaac Asimov and follows a group of exiles who are trying to preserve their culture as the galaxy collapses.

Created by Mike Flanagan (“The Haunting of Hill House”) this horror series follows an isolated community beset by supernatural events and increased division after the arrival of a mysterious priest (Hamish Linklater).

Michael Keaton stars in a series tackling the opioid crisis, from Big Pharma boardrooms all the way to a Virginia mining community. It’s based on a best-selling novel by Beth Macy and hails from “Empire” co-creator Danny Strong.

For fans of “Girls5eva,” this musical drama follows a quartet of women who turned the hip-hop world upside down in the 1990s. Now in their 40s, they’re ready to reunite. Singer Brandy and rapper Eve both co-star.

This sci-fi series follows different perspectives of people across the globe as they react to an alien invasion, starring Sam Neill (“Peaky Blinders,” “Jurassic Park”).

Showtime’s serial killer drama is getting an encore. After an eight-season run from 2006 to its controversial finale in 2013, Michael C. Hall’s serial killer, who targets other killers, returns. “New Blood” picks up a decade after the original series ended, with Dexter living under an assumed name in the small town of Iron Lake, NY.

The Shrink Next Door

Co-starring Paul Rudd and Will Ferrell, this dark comedy true-crime series is based on a podcast and follows a psychiatrist (Rudd) who gets into a bizarre and toxic relationship with his patient, Marty (Ferrell). Kathryn Hahn co-stars as Marty’s sister, Phyllis.

John Cho plays Spike in this hotly anticipated live-action adaptation of a hit anime series about a group of bounty hunters chasing down criminals across the solar system.

Hot off the success of shows such as “WandaVision” and “Loki,” the next Marvel Comics entry focuses on Jeremy Renner’s archer Avenger. “Dickinson” star Hailee Steinfeld co-stars as his protégée Kate Bishop, the first woman to take up the Hawkeye mantle.