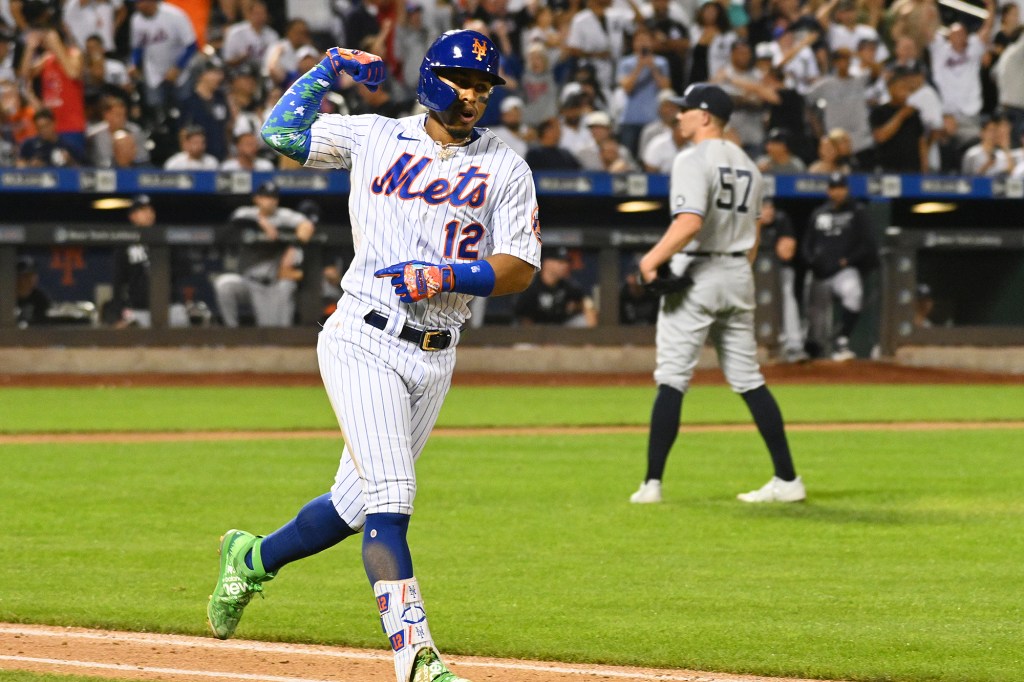 
Francisco Lindor silenced the Yankees in a manner even stronger than attempting to mock their whistling from the previous night.

In his defining game since arriving to the Mets, the star shortstop already had two homers Sunday night when he stepped to the plate against Chad Green in the eighth inning. Then he launched another, bringing the Mets the lead and a Subway Series victory.

Lindor’s three homers led a wild 7-6 victory over the Yankees — on a night the benches emptied at Citi Field — that gave the Mets two of three wins in the series and moved them within three games of the lead in the NL wild-card race. The Mets remained five games behind the first-place Braves in the NL East.

It marked the 15th time in franchise history a Mets player homered three times in a game. Lindor finished with five RBIs in helping the Mets win four of six games against their city rival this season. It marked only the third time since the advent of the Subway Series in 1997 the Mets won a season series against the Yankees.

This 4-hour, 6-minute drama wasn’t complete until Edwin Diaz retired Giancarlo Stanton on a pop up to Lindor with runners on second and third in the ninth.

The Yankees lost for the eighth time in nine games and fell one game behind in the race for the AL’s second wild-card berth.

All hell broke loose in the seventh, with benches emptying after Stanton hit a violent shot over the left-field fence against Brad Hand to tie it 6-6. As Stanton rounded the bases he chirped at Lindor, who an inning earlier made a whistling gesture toward the Yankees’ dugout after hitting his second homer of the game.

ESPN reported the Yankees were whistling a night earlier to tip off their batters about pitches from Taijuan Walker. The right-hander later indicated he believed he was tipping pitches during a second inning in which he allowed three homers and was alerted by Jonathan Villar during a mound visit.

On this night order was quickly restored following the emptying of benches, without any punches thrown. Maybe more troubling from the Mets’ perspective was the decision to let the left-hander Hand pitch to Stanton with first base open and two outs.

Gleyber Torres resurrected the Yankees from slumber by blasting a two-run homer in the sixth against Jeurys Familia that sliced the Mets’ lead to 6-5. Familia walked Joey Gallo before Torres crushed a 97 mph sinker over the left-field fence for his seventh homer of the season.

It was a second straight subpar outing for Familia, who was removed after getting only one out in the inning. On Thursday he surrendered a go-ahead homer to Jazz Chisholm Jr. in the eighth inning that sank the Mets in a loss in Miami.

In his season debut, Clarke Schmidt — who was sidelined for five-plus months with an elbow strain — lasted 4 ¹/₃ innings for the Yankees and allowed five runs, three of which were unearned, on seven hits and three walks. Schmidt departed after drilling Kevin Pillar in the fifth to load the bases and watched as Andrew Heaney allowed a sacrifice fly to James McCann, extending the Mets’ lead to 5-2, before J.D. Davis was retired.

The Mets got a call in the top of the inning after manager Luis Rojas confronted second base umpire Ted Barrett about Brett Gardner’s grounder, on which Anthony Rizzo left the base line running to second. Barrett changed his original call, and Rizzo was ruled out to complete the double play.

Lindor was all smiles after cracking a three-run homer in the second that placed the Yankees in a 4-2 hole. The homer was Lindor’s 15th of the season and third in September. Jeff McNeil singled to begin the rally and Pillar reached on Gio Urshela’s fielding error before Lindor hit a knuckle curve from Schmidt over the center-field fence.

Michael Conforto stroked an RBI single in the first that pulled the Mets within 2-1. Schmidt walked Villar leading off and Lindor’s ground out moved the runner to second before Conforto delivered. Schmidt allowed a two-out infield single to Javier Baez in the inning, but escaped.

Carrasco slogged through the first inning, allowing two runs after walking D.J. LeMahieu and Rizzo in succession to begin the game. Stanton smashed an RBI double for the Yankees’ first run before Joey Gallo’s sacrifice fly extended that lead to 2-0.

It continued Carrasco’s penchant for struggling in the first inning. In nine starts this season he has pitched to a 15.00 ERA in the opening frame.