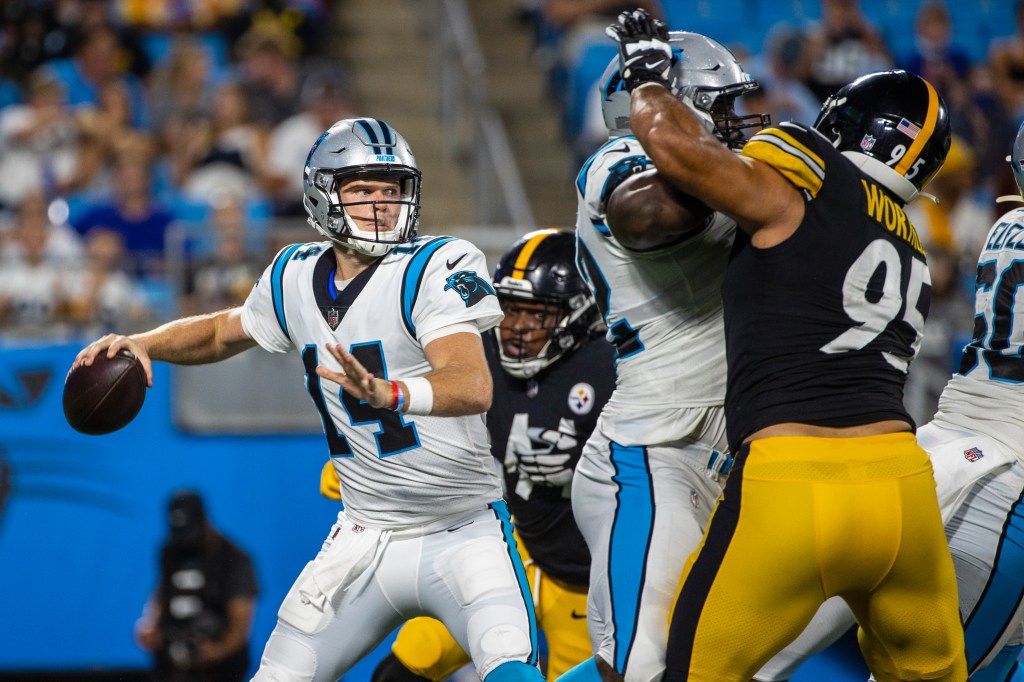 A couple of VSiN NFL experts agree that Sam Darnold and the Carolina Panthers will hit the Over on their 2021 regular-season win total of 7.5.

Youmans: The Panthers might still be a year away, but second-year coach Matt Rhule’s rebuild looks promising. Darnold’s development will be pivotal to this win total. Set up for failure with the Jets, Darnold is set up for success in offensive coordinator Joe Brady’s creative system that will highlight a talented group of playmakers.

Christian McCaffrey, the highest-paid running back in the league, returns from injury after his 2020 season lasted only three games. D.J. Moore and Robby Anderson are dynamic wideouts, with rookie Terrace Marshall, a second-round pick from LSU, emerging as the No. 3 receiver.

Tight end Tommy Tremble, a third-round pick from Notre Dame, was another nice addition. Darnold remains a question mark, of course, and the offensive line needs to develop as well. Rebuilding quickly is what Rhule does best, and he has had two good classes to improve the defense and overall depth on the roster.

A soft early schedule that lines up three of the NFL’s weakest teams in the first five weeks should help launch the Panthers toward eight or nine wins and a surprise playoff appearance. Carolina opens by hosting the Jets and Saints. Look for a 3-2 or 4-1 start after road games against the Texans and Cowboys and a Week 5 home game against the Eagles. New Orleans appears to be on the decline in the NFC South, and Atlanta is nothing special. The Panthers are on the rise in the division.

Reynolds: Rhule has been a rebuilder everywhere he has been. In three seasons at Temple, he took the Owls from 2-10 to 6-6 to 10-4 before departing for Baylor. In Waco, Rhule inherited a mess from Art Briles and took the Bears from 1-11 to 7-6 to 11-3. That history of improvement should translate to Carolina in 2021.

The change of scenery can only do Darnold some good, and he has more pieces around him in Charlotte. McCaffrey is the big piece. Injuries limited him to three games in 2020, but he has set several NFL records in just four years and has yet to have a full season in Rhule’s system. Moore, Anderson (who played for Rhule at Temple and had a career season last year) and Marshall form a formidable receiving trio.

This also might be the season when the rebuilding of the defense materializes through the draft and free agency. Brian Burns and Derrick Brown were high first-round picks on the defensive line. Haason Reddick, who also played for Rhule at Temple, joins on a one-year deal after having a career-high 12.5 sacks.

Safety Jeremy Chinn, a 2020 third-rounder, finished second in Defensive Rookie of the Year voting to Washington’s Chase Young. Rookie first-rounder Jaycee Horn should start immediately at corner. The Panthers open with four of six games at home and play only six teams with winning records.