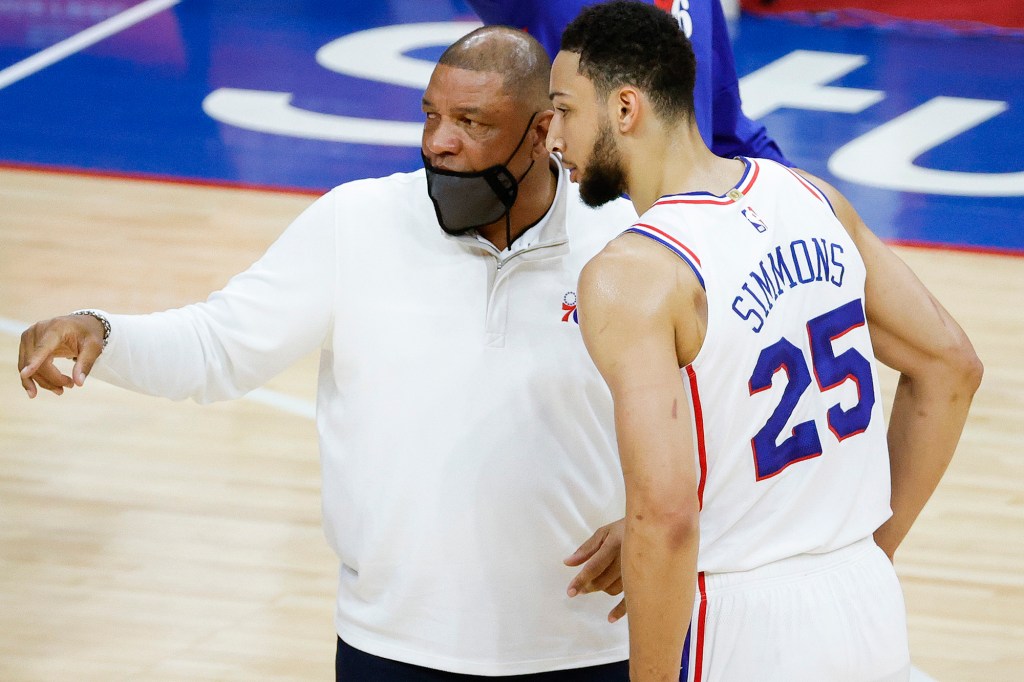 
The Ben Simmons-76ers saga is the soap opera you didn’t know you needed.

On Wednesday, Philadelphia’s head coach Doc Rivers appeared on ESPN’s “First Take” and made one thing clear about the team’s estranged star point guard: “We want him back.”

Although Simmons is still on the roster and has four years left on his $177 million max contract, the 25-year-old reportedly has no desire to continue playing for the Sixers.

On Tuesday, it was reported that Simmons will not report to training camp next week, and that he does not want to play in a Sixers uniform ever again.

Rivers confirmed on “First Take” that Simmons met with the Sixers front office, including himself, to inform the team he wanted a trade.

“Yeah, I mean it was a good conversation and he gave us reasons which we obviously didn’t agree with,” Rivers said.

“We’re always going to do what’s best for the team, but I can tell you up front, we’d love to get Ben back and if we can’t we’re going to try to do that. Ben has a long contract. It’s in our hands and we want him back.”

Rivers went on to say that the Sixers will try to fix the broken relationship with communication. In early August, it was reported that Simmons “cut off communication” with most of the Sixers organization — and that any exchanges were being handled by his agent, Rich Paul of Klutch Sports.

“We’re going to try [to get him back] and if it doesn’t work, it’s not going to be for us not trying to get it right,” Rivers said.

The rift between Simmons and the Sixers has played out since June, when the All-Star point guard put on a historically poor performance in the 2021 playoffs, specifically on offense and at the free-throw line.

After Philadelphia’s Game 7 loss to Atlanta in June, Rivers came under fire for his response to a reporter’s question: “Do you think Ben Simmons can still be a point guard for a championship team like the one you guys want to become?”

At the time, Rivers said, “Yeah, I don’t’ know that question or the answer to that right now.” His response created a narrative that he didn’t believe the Sixers could win a title with Simmons.

While on “First Take,” Rivers “wanted to correct” the situation, and said “we can win a title with Ben Simmons. I just believe that.”

He explained, “The question was asked about Ben [and] it was the first question after we lost Game 7. That had nothing to do with Ben, I said I’m not answering that crap. What disappointed me, was being portrayed that I said I don’t think we can win with Ben.”

In the postseason Simmons shot 34.2 percent from the free-throw line. In the seven-game series against Atlanta in the second round, Simmons attempted just three shots in the fourth quarter — none of which occurred in the series’ final four games.

Rivers said the Sixers hired a free-throw coach and a shooting coach to work with Simmons.

“It’s about free throws. We need to improve on that… and we want to get him in the gym and get better at the free throw line,” Rivers said.