Derek Jeter struck all the right notes in Hall of Fame speech: Sherman 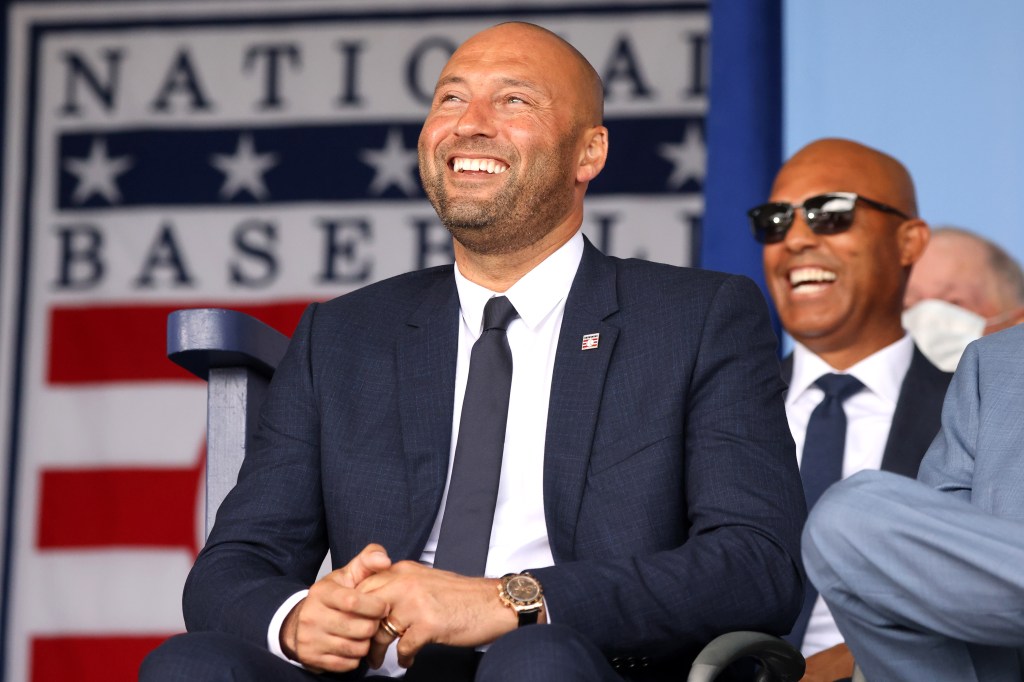 Derek Jeter’s Hall of Fame induction speech had been delayed by 14 months due to COVID-19, and so what was a few more seconds Wednesday when an adoring crowd would not let him begin over their standing ovation and chants of his name.

Even the implacable Jeter had to admit, “I forgot how good that feels.”

This is how Jeter started his valedictory moment, reminded once again that he is the most beloved New York athlete of the generation. Reminded that, yes, of course, the fans loved all the hits and championships and big, timely moments. But they also felt bonded to the workmanlike consistency of Jeter’s career; that he didn’t need October to care the most or play his hardest, that there were never excuses, never questions about focus, preparation or, vitally, what his obsession was.

“I only had one goal in my career — to win more than anyone else … and we did,” Jeter said at the outdoor festivities at Clark Sports Center, about a mile south of the Hall of Fame.

That Jeter was the same player with the same temperament regardless of the month or opponent actually made this all feel right. For he brought his star power to a midweek ceremony in a sleepy, upstate New York town. Mainly, though, Jeter brought Jeter. He did not succumb to pressure. He covered all the bases. He did it respectfully and professionally and with polish.

There had not been so much anticipation whether someone would cry publicly since Barbara Walters was still doing prime-time specials. Jeter, of course, did not shed a tear. Never choked up. He delivered the hits, spraying appreciation on his parents, sister, wife, children, George Steinbrenner, fans, coaches, managers and teammates.

He shared the induction stage with Ted Simmons, Larry Walker and — standing in for Marvin MIller — Donald Fehr. But this was a little like the movie “Castaway.” There were other people in it. But that is Tom Hanks’ film.

And this was Jeter’s day (though a hat tip to Simmons on a wonderfully crafted and delivered speech of gratitude and inspiration). After all, Simmons and Miller were named by the Modern Baseball Era committee. Walker just received enough votes on his 10th and final year on the regular ballot. They all go into the same plaque room. But Jeter does so in his first year of eligibility and one vote short of unanimous. He would joke, “Thank you to the baseball writers, all but one of you, who voted for me.”

Jeter offered few surprises in his speech. To have followed his career is to know what cornerstones his parents were in providing the groundwork for his diligence and sense of obligation. He touched on his backstory of spending summers with grandparents in New Jersey and becoming a Yankee fan and, at a young age, deciding all he ever wanted to be was shortstop of his favorite team.

He mentioned the responsibility and motivation derived from Hall of Famers past to honor the game with all he had. Jeter cited how important it was to not let down Yankee fans and to give his best — on and off the field — daily for them.

This is all common to the Jeter collection. So this played a bit like a greatest hits album. But like a historic band going back on the road, the fans wanted every drop of it. Wanted this encore moment at the pinnacle for their favorite son to don Yankee No. 2 jerseys and sing-song his first and last name and cheer like mad as if he were coming up against Pedro Martinez in the clutch.

Fans sensed a sincerity in Jeter. That he was a matinee idol unafraid of the grind of hard work. That he cared about the final score as much as them. That as he said in his words, he “had zero regrets in his career” because his preparation for the job and care about team success could never be questioned — by himself, teammates, opponents, media or fans.

His plaque opens, “Heartbeat of a Yankee dynasty.” That feels right, and so does the fans giving their hearts to him one more time.

Why everyone wants to punch Jake Paul in the face