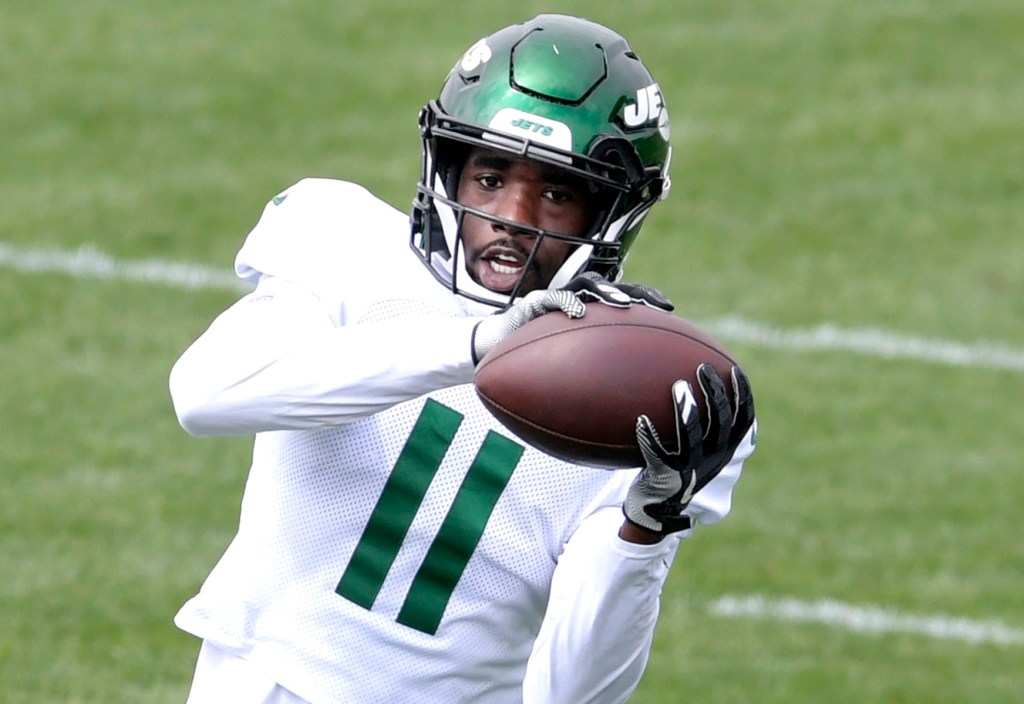 
Good news for the Jets could be more bad news for Denzel Mims.

The expected returns on Sunday of wide receivers Jamison Crowder (COVID-19) and Keelan Cole (knee) might further curtail Mims’ already limited playing time. Crowder, who was activated Thursday, and Cole both practiced on a limited basis. There is a chance that Mims, a second-round pick a year ago who played just three snaps and caught one pass for 40 yards in the Week 1 loss to the Panthers, could be inactive against the Patriots on Sunday.

“It is going to be tougher for all those guys,” offensive coordinator Mike LaFleur said, referring to Mims and some of the other receivers down the depth chart. “That’s why what they’re doing … in practice is absolutely so important to just show everyone, ‘You cannot keep me off the field.’ ”

Head coach Robert Saleh offered a stinging criticism of the speedy 6-foot-3 Mims on Sunday in explaining his lack of playing time. The coach said Mims needs to know all three receiver positions better since he isn’t a starter. Mims spent a majority of training camp receiving backup reps after missing a good portion of spring workouts due to a severe case of food poisoning.

“He wasn’t our starter going into [Week 1] and when you’re not a starter, this whole league, you have to have versatility within the different positions,” LaFleur said.

Both LaFleur and Saleh have said on numerous occasions that Mims is getting better, but that hasn’t meant more playing time. It could mean even less, actually.

“He’s way better than I wanted him to be,” Ulbrich said jokingly. “You anticipate seeing a young, inexperienced quarterback making young, inexperienced quarterback types of decisions. I didn’t see a whole lot of it [on film]. Part of that is I think he has some real skill and poise, and he obviously comes from a school where they get NFL-caliber coaching. So he’s probably as NFL ready as you can find from a quarterback [standpoint], and they’re working the scheme around him, and giving him some clean reads, some easy reads, some easy progressions.”

In his debut, Jones completed 29 of 39 passes for 281 yards, a touchdown and no interceptions in a 17-16 loss to the Dolphins. This will be the first road game for the former Alabama star and first-round pick.

In the offseason, the Patriots added two significant weapons at tight end: Jonnu Smith and Hunter Henry. They were quiet in Week 1, combining for eight catches for 73 yards and no touchdowns. The Jets expect the duo to be an integral part of New England’s game plan this week.

“I don’t think they would’ve got those guys for no reason,” safety Marcus Maye said. “Run the ball to them, throw the ball to them, do a lot of different things with them. They can stand up just like receivers. I expect them to be a heavy part of their game.”

The roadblocks to Yankees overcoming their greatest failing

H-1B lottery to continue for now, visa allocation not to be linked with higher wages – World News