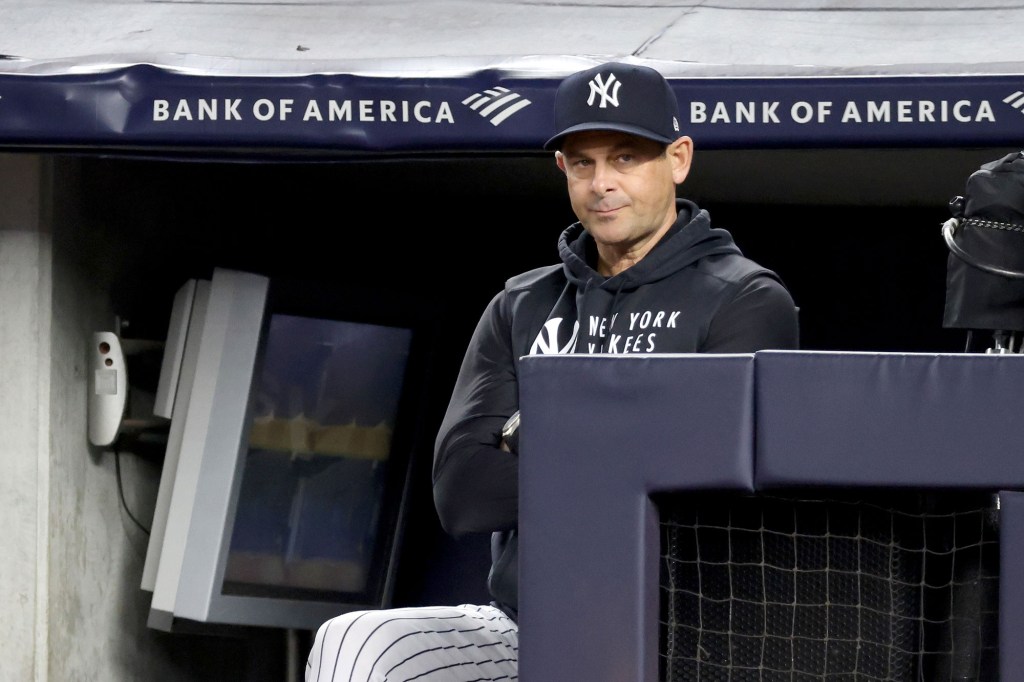 
We don’t have to wait to see if the Yankees will make the playoffs.

The postseason essentially starts for them Friday in Boston, where the Yankees, with Gerrit Cole on the mound, will open a three-game series against the Red Sox.

They enter the series two games behind their rivals for the top AL wild-card spot, as the Red Sox, Yankees and Blue Jays begin a nine-game sprint to the finish line to see which two teams will play beyond Oct. 3.

The Yankees go from Boston to Toronto and then finish the regular season with three games against the first-place Rays in The Bronx — with their fate in their own hands.

Manager Aaron Boone says that’s the way he wants it.

Others might add, “Be careful what you wish for.”

The Yankees will head into Friday’s matchup against the Red Sox with some abysmal numbers against their division rivals.

They are just 6-10 this year versus the Red Sox, including a 1-5 mark at Fenway Park.

The Yankees were swept in Boston in June and dropped two of three there in July. The Red Sox, meanwhile, are red hot, having won seven straight.

From there, the Yankees head to Toronto for the first time since 2019, as the Blue Jays have stayed in the playoff hunt despite having played in three different “home” cities this season due to COVID-19 protocols that restricted travel to Canada.

They started the year at their spring training site in Dunedin, Fla., then went to Buffalo, home of their Triple-A affiliate, before finally returning to Toronto last month.

The Yankees swept the series in Buffalo in June, but were routed by Toronto in a four-game sweep in The Bronx earlier this month to fall to 6-10 against the Blue Jays this season.

Following those two trips, the Yankees will finish the regular season at home facing the first-place Rays, against whom they are 7-9.

That’s a combined 9-19 for the Yankees facing their final three opponents.

Perhaps their best hope for this series is that Tampa Bay likely will have little to play for by that point, with a division title and postseason home-field advantage already secured.

If the Yankees don’t take care of business on their own, they figure to be in trouble — since they have by far the most difficult schedule the rest of the way.

According to Tankathon.com, the Yankees have the second-most difficult remaining schedule, with their three AL East foes combining for a .583 winning percentage.

Compare that to the Blue Jays, who have the 25th hardest slate, with upcoming series against the Orioles (three games) and Minnesota (four games).

Boston has the third-easiest schedule left, with six games against Baltimore and Washington after the Yankees leave town.

Despite that, though, the Yankees are in decent shape overall.

They have Cole going Friday night against Nathan Eovaldi. Gleyber Torres has been hitting slightly better since being moved from shortstop to second base. Gary Sanchez, coming off the bench Wednesday, had a huge play behind the plate in the top of the eighth when he threw out Texas’ Adolis Garcia trying to steal second and an even bigger play at the plate in the bottom of the inning, when his two-run blast secured the victory.

Luis Severino and Domingo German are both ready out of the bullpen and Jonathan Loaisiga might not be far behind.

Perhaps the best news of all for the Yankees this weekend is that Chris Sale won’t pitch for the Red Sox. Their lefty ace beat the Mets on Wednesday night and is rounding back into form after a stint on the COVID IL.

Now, after a 6-11 start to the season, a 13-game winning streak followed immediately by a 2-11 stretch, it’s up to the Yankees to prove they’re as good as they say they are.