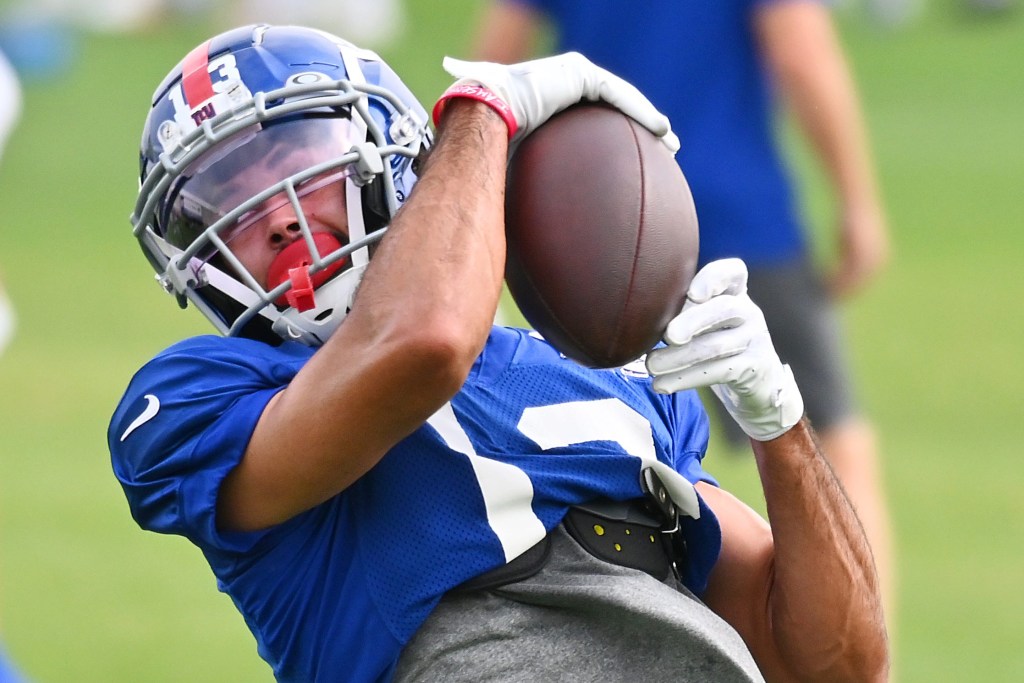 He was a bust with the 49ers, the 44th pick of the 2018 NFL Draft who ended up in Kyle Shanahan’s doghouse before he was unceremoniously cut midway through his third season.

Dante Pettis has spent this training camp hoping to show Joe Judge that the light turns on later for some. Pettis caught a TD bomb from Daniel Jones during one of the joint practices with the Patriots last week and was fighting for his New York Football Giants life in the third preseason game Sunday night against New England.

Pettis admits now that he was too immature when his career began a downward spiral in 2019 and considers Judge the perfect coach for him at the perfect time.

“Definitely the pressure that Coach Judge puts on us at practice I think helps a lot because you’re kinda in that mode every day where it’s like, ‘I have to be perfect this play,’ or else blah, blah, blah, blah,” Pettis told The Post. “I think that’s helped with my mentality just like being ready for practice every single day.”

He failed to seize his opportunities in San Francisco, and this summer, with Kenny Golladay and No. 1 pick Kadarius Toney sidelined, with the Giants forever interested in a punt returner who can change field position for Daniel Jones, he hopes that the coaches have room at the Big Blue Inn for him.

He was asked what kind of player he believes he can be.

“I can be a really good football player, I know that, I know I’ve shown it,” Pettis said. “I have confidence in myself. Whatever happens here happens here, but I know I can play football, and I know I’ve gotten better this camp. I know this team has helped me get better. I want to help this team win.”

Asked if he got a fair shake with the Niners — he was inactive for Super Bowl LIV — Pettis said: “Every coach has their own things, what they like, what they don’t like. At the end of the day, I didn’t do what I was supposed to do. We had some disagreements. I thought we were in a better place the third year, we had some guys playing well, so they went with them. That was my opportunity. I have nothing against them, they have nothing against me whatever, it didn’t work out. Every single player goes through it.”

Every single player who fails to live up to the standards set by the organization that believed in him. Asked to elaborate on the disagreements between him and Shanahan and the coaching staff, Pettis said: “Just like they thought I did something wrong or something and I didn’t view it as something wrong. Like on a route or like my second year I guess I was a little more immature where I wasn’t practicing as hard, and they saw that as like I didn’t care or something. At practice like I didn’t get the urgency, I guess. Not disagreements, I guess just not seeing things the same way. It didn’t get fixed as soon as it should have.”

The 49ers couldn’t find a trade partner and cut him last Nov. 3. The Giants claimed Pettis the next day.

“Dante Pettis was one of the best punt returners in the history of college football,” Giants special teams coordinator Thomas McGaughey said.

Yes he was — with nine punt return TDs at the University of Washington. One of his four catches as a Giant was a 33-yard TD from Jones against the Cowboys.

“The one thing I love about punt return is that everybody has to do their job to make the play special,” Pettis said. “Obviously there’s some rare instances where someone just like breaks 10 tackles or whatever, but for the most part, the blocking has to be not perfect, but just good enough for the return to break free. It’s players on defense that I normally don’t get to play with, they’re out there helping me score too. It’s fun, exciting, the fans love it, you know?”

His favorite punt returners were Devin Hester and DeSean Jackson. “If you’re a playmaker, whatever, you want the ball in your hands. That’s just another way to do that,” Pettis said.

Former college teammate John Ross, who hosted Pettis on his official visit, was fighting for a wide receiver spot as well along with David Sills. Ross, who has an injury history, has been shelved (hamstring) since Aug. 9.

“One person does something, it’s like, ‘Oh man, Ross did that? All right, I gotta do something too,’ ” Pettis said. “But it’s fun, that guy’s been one of my best friends. I feel like we bring out a good side of each other, and it’s been fun to have him here.”

It’s been fun having Jones as a quarterback.

“He’s a competitor, always headfirst into whatever the competition or activity it is,” Pettis said. “If something’s not right, he wants that fixed. That’s something I kinda picked up on, I’ve noticed. I think he’s gonna be a really good quarterback.”

But would Pettis earn the chance to be one of Jones’ weapons?

He has 42 career receptions and five of his eight TD catches came in his rookie season. He has yet to return a punt for a touchdown.

“This is only my fourth year,” Pettis said. “It’s not like I’m 10 years in or something. I got a lot of football ahead of me. At the end of the day, everything I’ve gone through, yeah I wish I would have had more snaps, caught a few more passes, all that, but it’s led me to where I am now. I wouldn’t be the football player and I wouldn’t be the person I am now if I didn’t go through all that stuff.

“I’m grateful for my journey, and like I said, I got a lot of football left.”