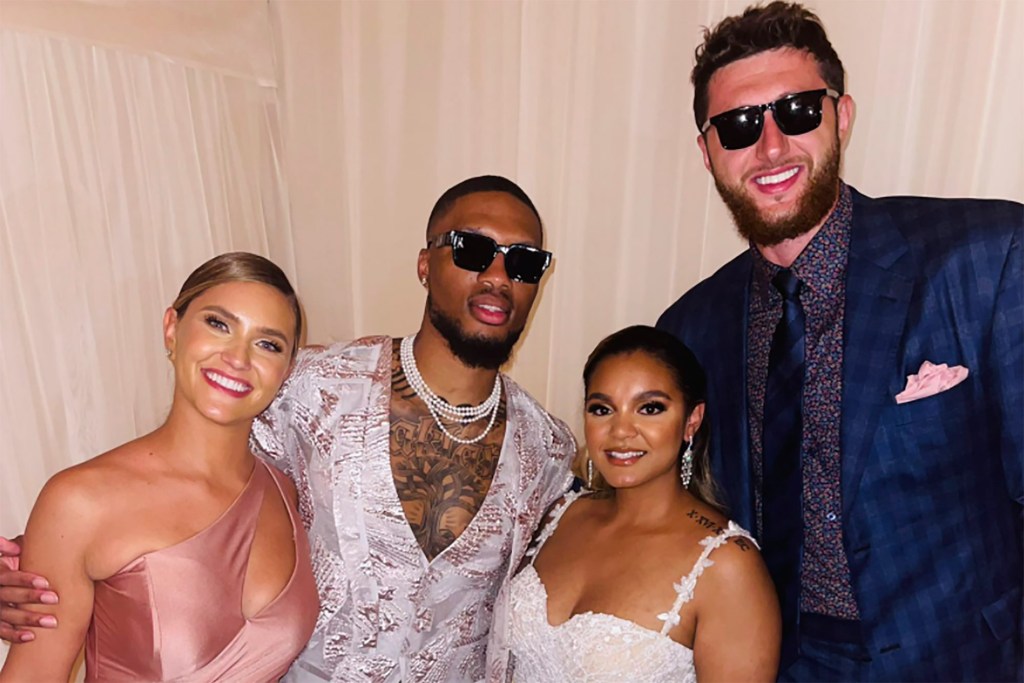 
“#ItsAboutDameTime” was the hashtag for Damian Lillard’s star-studded wedding over the holiday weekend.

The Trail Blazers point guard tied the knot with his Weber State college sweetheart Kay’La Hanson in an outdoor ceremony — 19 months after he popped the question during NBA All-Star weekend in February 2020.

McCollum’s wife Elise showed off her baby bump in photos from the nuptials, which marked the first time the couple shared the news that they’re expecting their first child together.

Wizards star Bradley Beal and his wife Kamiah Adams-Beal were also in attendance, along with Draymond Green (Warriors) and DeMar DeRozan (Bulls).

Snoop Dogg, Common and Tevin Campbell all performed, as well as the bride and groom — who released his new album titled “Different On Levels The Lord Allowed” under his studio name “Dame Dolla” in late August. Kay’La’s solo performance also include a dance routine with her friends.

The couple of the hour sported a number of looks throughout the weekend.

Lillard wore two custom looks by It’s Goode Clothing. The first was a dark three-piece tuxedo with satin accents. His reception look was “designed specifically to make a bold statement and show Dame D.O.L.L.A in full effect,” according to the brand.

“I’m tired of the fast lane… I want you to have my last name,” the six-time All-Star wrote alongside a collage of wedding photos on Instagram.

Lillard and Kay’La have been dating since they met at Weber State. The share three children together — 3-year-old Dame Jr., and 7-month-old twins, daughter Kali Emma Lee and son Kalii Laheem.