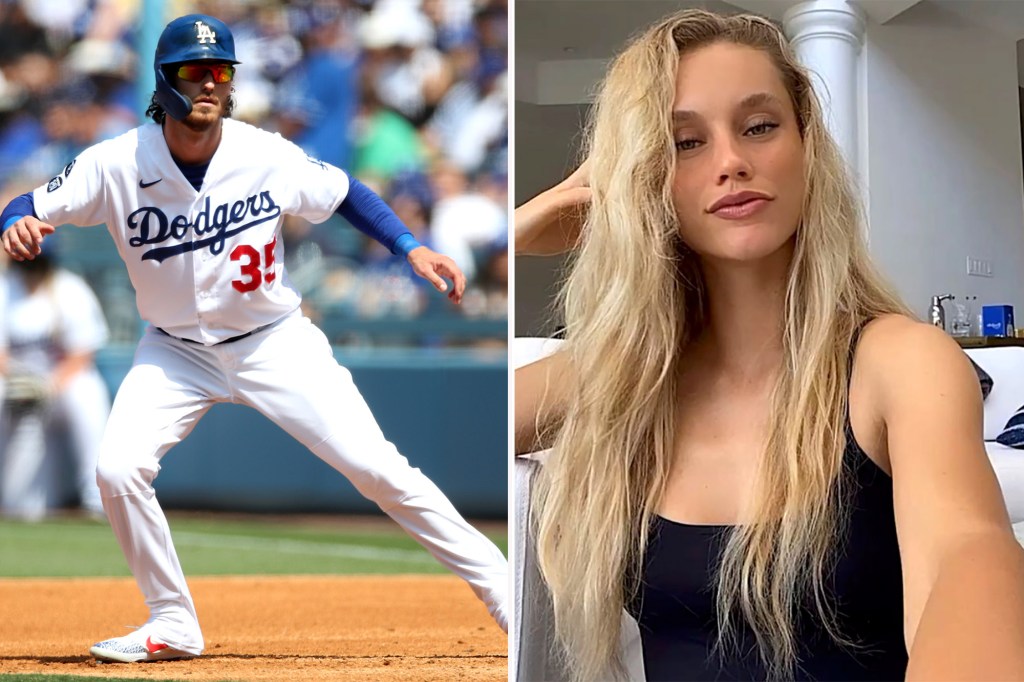 
Dodgers star Cody Bellinger is months away from taking on his proudest role yet — becoming a “girl dad.”

The two-time All-Star center fielder is currently expecting a baby girl with model Chase Carter, who is “technically due Nov. 28,” Bellinger told The Post.

Chase announced her pregnancy in an Instagram post on July 13 — Bellinger’s 26th birthday. Though, the 2020 World Series Champion and IMG model spent months enjoying the pregnancy in private.

“I found out four months ago, so I kept it a secret for a little bit to make sure [they were] healthy,” Bellinger said recently about both his girlfriend and their soon-to-be daughter.

And even if the defending champs make another deep October run, Bellinger still should have plenty of time to prepare for the big changes coming.

Bellinger is well aware fatherhood is a much different ball game than what he’s used to, but he’s up for “the challenge.”

“The first year is probably going to be a grind from what I’ve heard, but when they start talking and getting a personality. — It’s going to be fun.”

While Bellinger prepares for fatherhood, he’s also gearing up for another role that has him seeing pink.

“My sister is pregnant too [with a girl], a few weeks ahead of us, so that’s going to help,” he said about his older sister Ashli Korver Bellinger. “I’ll get to see her being a mom a few weeks before our baby is born and little cousins growing up together, that’s awesome.

“My parents went from no grandkids to two little girls in a few months. Everything is already pink and girly.”

As he awaits the birth of his baby girl and niece, Bellinger is also focused on getting back to full potential with the Dodgers, following a string a injuries.

The 2019 National League MVP entered the season recovering from offseason shoulder surgery to repair a damaged labrum. After starting spring training late, he was faced with another setback when he suffered a hairline fracture in his lower left leg — followed by a hamstring strain in June.

“It’s definitely been a unique year for me, but right now I feel good. I’ve been working hard every day with my strength and conditioning coaches to get right, and I’m learning about my body and why working out is good for me, why doing soft tissue is good for me,” said Bellinger, who is hitting .161 this season with nine home runs in 81 games.

“Normally, I was just young and had some aches and pains, but this year I’ve had injuries and I’ve had to learn a lot about my body and how it works has been pretty cool. It’s fun though. Now I have my own routine everyday and go in knowing what I need to do in order to get ready for the game.”

Despite Bellinger’s struggles, the Dodgers are in a tight race with the Giants for the top spot in the NL West and the best record in the league.

“I think we’ve been playing pretty well. As of a lot of teams this year, we’ve dealt with a lot of injuries and I think that’s just kind of been the norm of this season,” Bellinger said. “It’s been a unique season for a lot of teams, but we’re finally getting healthy and we made some trades. Hopefully we can play better than we have.”

The Dodgers aided their chances with the trade deadline additions of Max Scherzer and Trea Turner from the Nationals in a blockbuster deal.

“We’re just competing. No matter who’s out there or who’s hurt, you have to go out and compete,” Bellinger said. “We have a really deep roster now. It’s Important to just take care of what you can control and that’s what we’re good at. Obviously the division is very close and that’s very exciting. We’re good at making sure we’re alright and continuing to take care of ourselves.”

While Bellinger navigates arguably his most unpredictable season yet, he’s conquering seasonal allergies with Flonase Sensimist — an allergy relief product he credits for helping him stay focused on the field.

“It’s so important for me to keep up with my allergy routine, even in the fall,” Bellinger said.