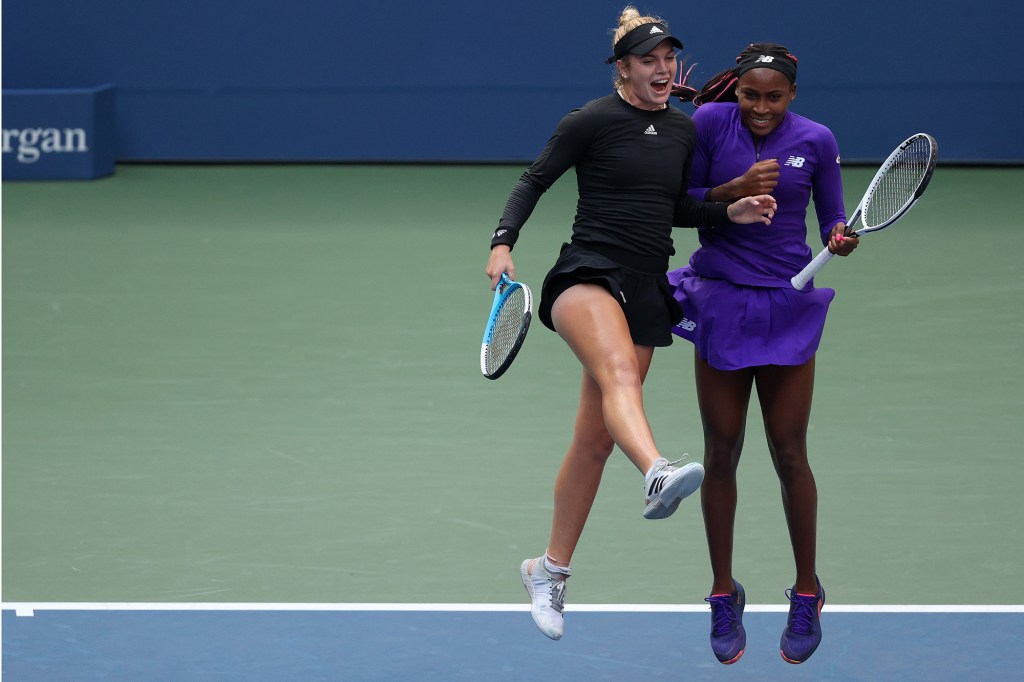 
Coco Gauff and Caty McNally ascended to the top of the women’s doubles teams almost as quickly as their friendship formed.

The teenage duo’s tear through the 2021 U.S. Open continued Wednesday afternoon, when they knocked off the top-seeded team of Elise Mertens and Su-wei Hsieh to reach their first-ever Grand Slam semifinal in doubles. Gauff and McNally, the No. 11 seed, will face Canada’s Gabriela Dabrowski and Brazil’s Luisa Stefani on Friday.

“We didn’t talk that much. We didn’t talk at all,” McNally said after the win Wednesday of the first time she met Gauff at a U.S. Tennis Association training session in Orlando, Fla.

Chimed in Gauff, who was sitting beside McNally during their press conference: “I was younger than all you guys, I was the youngest of the bunch. I was scared of all of you.”

The two giggled and interrupted each other like a couple of normal 19- and 17-year-olds, respectively. But there is nothing normal about coming off one of the grandest stages in tennis after upsetting the No. 1 seed and 2021 Wimbledon champions.

McNally and Gauff, who have been dubbed “McCoco,” first played together three years ago, winning the U.S. Open doubles title. They continued to pair up and have won three WTA titles since 2019, while reaching the quarterfinals of the Australian Open twice.

It’s a stark contrast to their upcoming opponents, who played in their first tournament together just a month ago. The 29-year-old Dabrowski and 24-year-old Stefani defeated the Czech team of Marie Bouzkova and Lucie Hradecka, 6-4, 4-6, 6-1, at Louis Armstrong Stadium on Wednesday to advance to the semifinals.

After competing as a team for the first time in San Jose, Calif., in August, when they won three matches on their way to a finals berth, Dabrowski and Stefani went on to win the WTA 1000 event in Montreal. The two then made the final of another WTA 1000 in Cincinnati before losing to Samantha Stosur and Shuai Zhang.

McNally and Gauff have different strengths that seem to complement each other, but both like to play aggressive tennis. While McNally is the stronger server, and the steadier volleyer, Gauff is better along the baseline.

As teenagers dominate the headlines at the U.S. Open, with Leylah Fernandez and Emma Raducanu in the women’s singles semifinals, McNally and Gauff have an opportunity to continue the trend.

Hank Grazioso, who lost both sons on 9/11, itching to return to work for Yankees