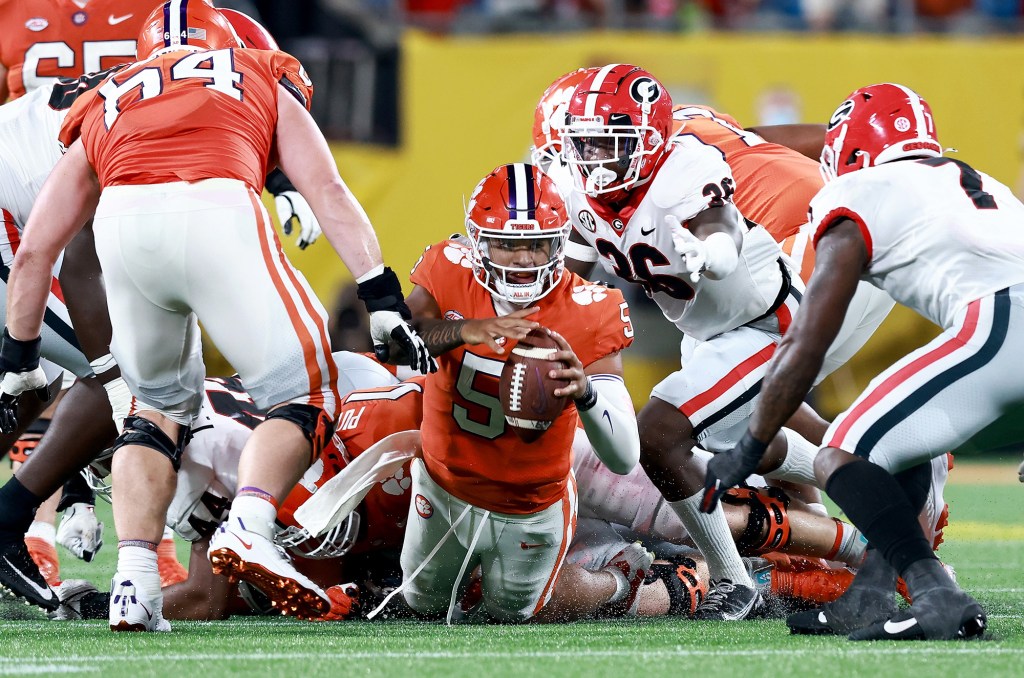 This isn’t as much about Clemson as the conference it plays in. Ordinarily, a seven-point loss to a top-five team at a neutral site wouldn’t severely damage a team’s hopes at reaching the College Football Playoff.

It just so happens Dabo Swinney’s third-ranked Tigers play in the ACC, the league they have single-handedly carried for years. Now, Clemson may not be able to lug the conference around without falling over.

The 10-3 loss to No. 5 Georgia, coupled with the absence of another ranked team on the Tigers’ schedule, puts their streak of a seventh straight playoff berth in major danger. In fact, given the weakened state of the ACC, the smart money would be on them missing out.

In this run, Clemson either went undefeated or was able to balance out a bad loss with a major non-conference victory. In 2016 and 2017, there were wins over SEC power Auburn, in addition to ranked victories over ACC opponents.

Clemson’s remaining schedule doesn’t include one high-caliber opponent. The ACC may not have another team ranked when the latest Associated Press Top 25 poll comes out Tuesday. Its trademark team’s loss was the lowlight of a brutal first weekend for the conference.

The league’s two previously ranked teams, No. 10 North Carolina and No. 14 Miami, didn’t look like they deserve a number next to their names. Miami was walloped by top-ranked Alabama, 44-13, and North Carolina was nipped by Virginia Tech, 17-10, in a punchless loss that likely did irreparable harm to Sam Howell’s Heisman Trophy hopes. Georgia Tech fell to FCS program Northern Illinois. Duke was knocked off by Charlotte for its first win over a Power Five foe. Florida State was toppled at home by reloading Notre Dame.

Crazy things can happen in college football. Maybe an ACC team will emerge that can offer Clemson the quality victory it lacks. Perhaps South Carolina has a better season than expected and a victory in late November boosts the Tigers. Maybe Swinney’s team is so dominant the rest of the way, so thoroughly impressive, the committee looks past the absence of a marquee victory and instead emphasizes the fact Clemson suffered a narrow loss to an elite team at a neutral site.

These are all possibilities. They just seem more like long shots than realistic scenarios. A lot now has to go Clemson’s way. The odds are against it returning to the College Football Playoff for a seventh consecutive season.

Weeks from now, we will get a better understanding of UCLA’s national relevance. We’ll learn if Saturday night’s thorough 38-27 victory over LSU, not to mention the dominant win over Hawaii that preceded it, was more about the Bruins or the SEC foe they overpowered. The Tigers, who entered the contest ranked 16th, weren’t a good team last year and they may not be one this year, either.

Perhaps, Chip Kelly’s team can get all the way to Oct. 23 undefeated for a showdown against 11th-ranked Oregon. But, it is apparent, this is a different UCLA than the one that went 10-21 over Kelly’s first three seasons. It has more playmakers on both sides of the ball. It is quicker. It has better talent. It didn’t seem like a fluke that it ran for 210 yards against LSU. Michigan transfer Zach Charbonnet, with 223 yards and four touchdowns in two games, looks like an elite running back so far.

Now, UCLA has to go prove it warrants the attention it will receive.

The ’Nole kit and caboodle

Florida State might be on the right track. The Seminoles also may have a quarterback. They rallied from 18 points down against No. 9 Notre Dame after former Central Florida signal-caller McKenzie Milton led them to 10 points in the final 4:43 before falling short in overtime. Milton, a remarkable comeback story returning from a dislocated knee and torn ligaments and tendons in the same knee three years ago, was tremendous after coming off the bench in the fourth quarter. Florida State was able to rush for 264 yards. There is a lot to build on in Tallahassee.

Memo to Power Five coaches and athletic directors: If you see an Alabama area code, do not answer the phone. Opening with the Crimson Tide is illogical. Just ask Miami, the latest victim of a season-opening blowout to Nick Saban and Co.

Yes, it’s incredibly early, but the Bulldogs are already in a great spot for the College Football Playoff. Their win over Clemson will have lasting power, and a soft conference schedule — Georgia doesn’t face Alabama or Texas A&M — makes it a heavy favorite to win the SEC East.

There were some concerns in the opener — jitters from freshman quarterback C.J. Stroud, defensive problems all over the field — but Ohio State’s talent remains elite, which enabled it to overcome those issues in a two-touchdown win at Minnesota.

Some supposed experts (like yours truly) projected Oklahoma as a national championship contender based on an improved defense. Didn’t look that way in Week 1 against Tulane, when the Sooners were gashed for 396 yards of offense.

It was jarring to see Clemson fail to put up 200 yards of offense, no matter how dominant Georgia’s defense was Saturday night. Fortunately for D.J. Uiagalelei, he won’t see a unit anywhere close to that dominant in the pedestrian ACC.

After last year’s dismal opener, a 17-point loss to Louisiana-Lafayette, Iowa State will take this year’s start, even if the six-point win over FCS foe Northern Iowa was excruciatingly ugly.

Forget the final result, a 41-10 rout of Kent State, Aggies fans have to be nervous about their quarterback after redshirt freshman Haynes King threw three interceptions in his first start.

There was bad news for Cincinnati in Week 1 despite its blowout of Miami of Ohio. Indiana, one of two high-caliber non-conference opponents for the Bearcats, was taken apart by Iowa. That matters when you’re trying to overcome long odds to reach the playoff.

The Nittany Lions have two premier talents in safety Jaquan Brisker and wide receiver Jahan Dotson, and both played pivotal roles in the upset of Wisconsin, Brisker making an interception and Dotson catching a 49-yard touchdown pass.

No team played a more well-balanced game against a quality opponent than Iowa, which made Indiana look like a Big Ten bottom-feeder instead of a contender in a lopsided victory.

Daniels did not play well on the big stage, throwing for just 135 yards and an interception against Clemson, but he will have plenty of time for stat-padding against weaker defenses in the coming weeks.

My pick for the Heisman is going to need to do a lot better than 100 yards of offense and one touchdown — which he was limited to in the win over Northern Iowa — moving forward.

Not the start Rattler or Oklahoma envisioned: Two interceptions and just two touchdowns in a narrow victory over Tulane for the preseason Heisman favorite.

The hype was warranted for one week. Robinson produced 176 yards and two touchdowns on 24 touches, showcasing his versatility and explosiveness.

This is how you start a Heisman campaign: By setting an Alabama record for passing touchdowns (four) and passing yards (344) in a debut as a starter.