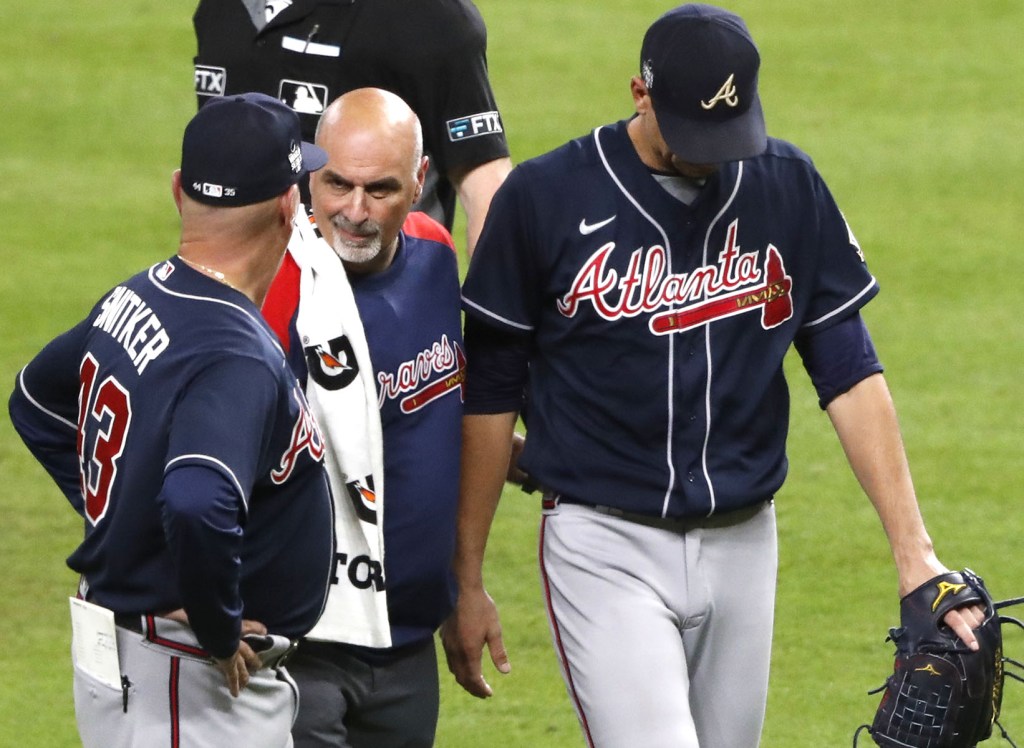 
HOUSTON — The first game of this 2021 World Series arguably will be remembered most of all not for a home run, a defensive gem or a key pitch but rather an injury.

That would be Charlie Morton’s fractured right fibula, which Atlanta’s veteran apparently suffered on his final pitch of the night, in the third inning, as his Braves topped the Astros, 6-2, in World Series Game 1. Which will challenge Atlanta even as it grabbed the 1-0 lead in this series.

Snitker declined to specify precisely how the Braves will move on, yet they already were planning to deploy a bullpen game for Game 4 Saturday at Truist Park, and now who will take Morton’s turn in a Game 5 stands in doubt. Their only two remaining traditional reliable starters are Max Fried and Ian Anderson, who are set to start Games 2 and 3, respectively.

Morton’s unexpected detour began in the bottom of the second inning, after he left the bases loaded in the first. The Astros’ Yuli Gurriel led off the frame with a comebacker, 102.4 miles per hour off his bat, that bounced once before nailing Morton in his right leg, then ricocheting right to Freddie Freeman, who gathered the ball and tagged the bag for a 1-3 out.

If Morton limped a little as he returned to the mound, his lack of words spoke louder than his actions. The Braves didn’t even send out a trainer. The 37-year-old’s subsequent actions offered no concern, either, as he struck out Chas McCormick and retired Martin Maldonado to end the second.

After that inning, Snitker said, “They looked at him [with an X-ray] prior to him going out to start the next inning, and everything was good.” So the right-hander returned for the third and utilized six pitches to strike out Jose Altuve. Upon delivering the sixth pitch, a curveball called for strike three, he stumbled, stabilizing with his arms, and that compelled a team trainer as well as Brian Snitker to visit the mound. The pain finally got to Morton, even as the Astros never did, and the Braves believe that Morton sustained the injury on that final pitch.

“Yeah, it’s tough losing Charlie,” Braves catcher Travis d’Arnaud said. “The person he is in the clubhouse, the mentor he is in the clubhouse, especially this time of the year, is very valuable. For us to lose him in Game 1, it’s a dagger, but he’s still going to be there with us, cheering us on, and still trying to teach us everything that he’s learned along his path and his career.”

The Braves’ relievers picked up the baton, as they have this entire postseason when asked, and recorded the final 20 outs with minimal difficulty, giving up just two runs. Now that unit will face its greatest test.