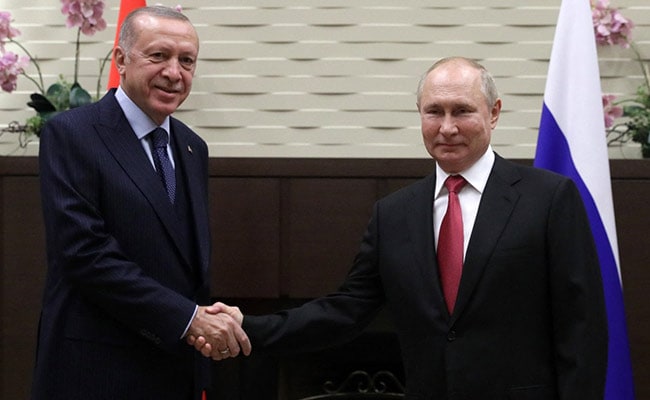 Russian President Vladimir Putin was awkwardly left waiting alone ahead of the meeting with Turkish leader Recep Tayyip Erdogan, as seen in a clip that’s going viral. The meeting in Iran was Mr Putin’s first with a NATO alliance leader since Russia invaded Ukraine in late February. Mr Erdogan was apparently late for the meeting with the Russian leader and that’s when the moment was captured.

Mr Putin entered the room where the meeting was scheduled to take place, but no one was present to greet him.

The video shows the Russian leader fidgeting for 50 seconds in front of his chair and the nations’ two flags, his hands clasped, mouth twitching and his stance shifting before Mr Erdogan appears. Mr Putin then raises his hands to his sides.

“Hello, how are you, good?” Erdogan said as they then smiled at each other and shook hands.

Mr Putin is known for keeping world leaders waiting (some for hours). Turkish media speculated it may have been payback for a 2020 meeting in Moscow when Mr Erdogan was left waiting for about two minutes by the Russian leader ahead of a meeting.

Turkey’s T24 website asked in a headline: “Was it revenge?”

The clip has also generated a lot of buzz online. “Those 50 seconds that Erdogan made Putin wait, looking frazzled in-front of cameras say plenty of how much has changed after Ukraine,” Joyce Karam, senior correspondent at Middle Eastern media organisation National News, said in a Twitter post.

Russia’s invasion of Ukraine in February has killed thousands and displaced millions, but also hampered shipments from one of the world’s biggest exporters of wheat and other grain, sparking fears of global food shortages.

Mr Putin, in Tehran for talks with his Turkish counterpart Erdogan, on Tuesday said “progress” had been made in discussions towards exporting grain from Ukraine.

After talks with both Erdogan and Iran’s president, the Russian leader told reporters that any deal hinged on the West’s willingness to yield some ground.