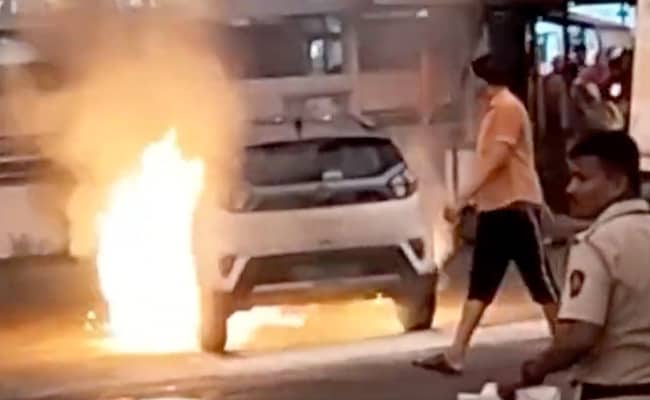 The fire was eventually doused by firefighters.

In the last couple of months, several electric scooters have caught fire in India, however, now an electric car has been filmed on fire in Maharashtra.

Videos making the rounds on the internet shows a Tata Nexon EV engulfed in flames outside a restaurant in the West Vasai area of Mumbai. As of now, the cause of this particular incident isn’t known. But in a statement, Tata Motors has assured that a detailed investigation has been initiated in the matter.

In the clip, firefighters and police officials are seen struggling to put out the raging blaze. There have been no reports of loss of life or injury due to the incident. The white body Nexon EV was parked outside a restaurant. The fire was eventually doused.

Also Read | Except For Tatas, No One Can Make Air India Work, Says Emirates President

After the videos went viral on social media, Tata Motors issued a statement. “A detailed investigation is currently being conducted to ascertain the facts of the recent isolated thermal incident that is doing the rounds on social media. We will share a detailed response after our complete investigation,” the company said in a Twitter post.

“We remain committed to the safety of our vehicles and their users. This is a first incident after more than 30,000 EVs have cumulatively covered over 1 million km across the country in nearly 4 years,” it added.

Tata Nexon EV has been on sale in India for more than two and half years now. It is one of the highest-selling passenger EVs in the nation. Tata Motors has recently also launched the Nexon EV Max in India which has a larger battery pack, develops more power and torque, and is claimed to deliver a range of 437 km on a single charge.