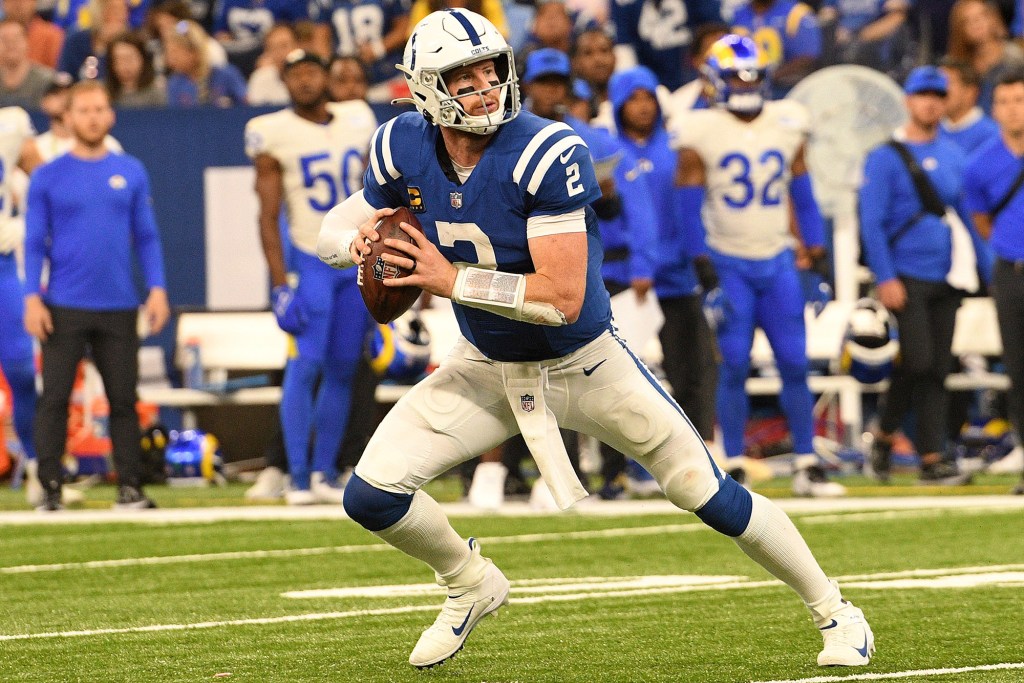 
Indianapolis Colts quarterback Carson Wentz suffered sprains to both of his ankles over the weekend and will undergo tests on Monday to determine their severity, according to NFL Network’s Ian Rapoport.

The injury happened when Wentz stepped up in the pocket with 7:30 left in the fourth quarter, flinging a last-ditch pass to Michael Pittman Jr. as Aaron Donald neared from behind. Donald twisted Wentz when the pair tumbled to the ground, his lower legs pinned between the defensive lineman and field at one point, and Wentz limped over to the sidelines when the field goal unit came onto the field.

“Felt it right away,” Wentz said postgame. “Did not feel good. Tried to tape it up, do everything I could to get out there and finish the game. It’s a bad feeling to not be out there, especially in that situation.”

When asked if there was any fear of a broken ankle, Wentz said he wasn’t sure at that point. Jacob Eason entered to finish the game for the Colts, completing 2-of-5 passes for 25 yards and throwing an interception with just over two minutes left. Indianapolis received the ball back once more, but a LA punt had pinned them at the 10-yard line.

It’s the latest injury-induced setback in Wentz’s NFL career, one where he’s played 16 games just once since his rookie season in 2016. He missed the final three games, and the Eagles’ run to the Super Bowl, in 2017 with a torn ACL. Then, he was inactive for the opening two and final five games of 2018, as well as the final four games of 2020 after he was benched for Jalen Hurts. Philadelphia traded him to the Colts in the offseason.

Wentz missed time during the preseason after he suffered a foot injury in practice that required surgery, placing him on an original recovery timeline of 5-12 weeks. He underwent the procedure on Aug. 2 and returned exactly one month later, calling that first practice back a “step in the right direction.”

The Colts then dropped their Week 1 game, 28-16, to Seattle, where Wentz went 25-for-38 with 251 yards and two touchdowns. And while he threw an interception against the Rams, his efficiency — and total yardage through the air — mirrored the season-opening performance.

But then came the scramble midway through the fourth quarter, which caused him to leave the game and place his hand on his head in frustration while resting against a Gatorade cooler alongside Colts trainers.

“I’ve sprained my ankle 100 times probably since I was a kid,” Wentz said. “This one I just couldn’t play through at the end of the game.”

The Colts play the division-rival Tennessee Titans next week, as they aim to avoid their first 0-3 start since 2011 — the season before they selected Andrew Luck No. 1 overall. And with their new starting quarterback’s status in flux, the task could now fall into the hands of Eason.

Listen to Episode 88 of ‘Pinstripe Pod’: Will The Yankees Miss The Playoffs? feat. Nick Turturro