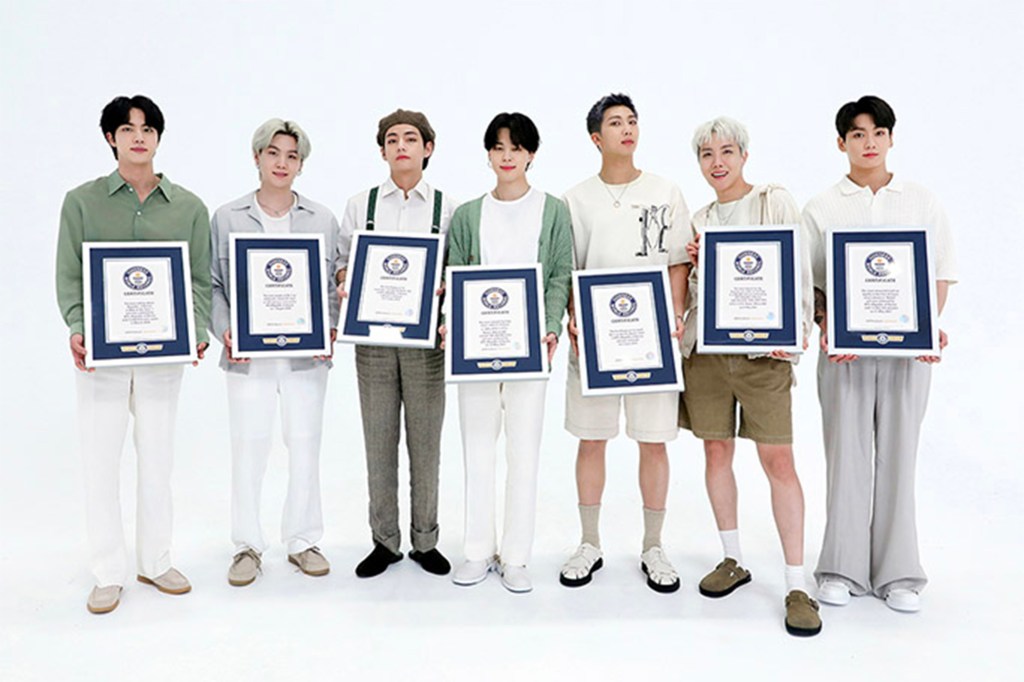 
BTS has some “Dynamite” news!

But before members of the K-Pop band’s avid fandom take to the streets, no, their tour is not starting up again.

Instead, the group is being inducted into the Guinness World Records 2022 Hall of Fame with an impressive 23 records thanks to their hits for a multitude of tracks, from “Butter” to “Mic Drop.”

“BTS have collected a jaw-dropping 23 Guinness World Records titles across music and social media – an amazing result achieved also thanks to the enthusiasm of their fans, the ARMY,” Guinness World Records said in a statement on Thursday. “As for their ability to have fun, amaze and communicate through music and dance moves, as well as their dedication for breaking records … that is certainly what marks BTS as the perfect fit for our Hall of Fame 2022!”

The boy band set 11 of those 23 world records in the past year alone, according to Guinness. In May 2021, their chart-smashing hit “Butter” single-handedly raked in five records, including most streamed track on Spotify in the first 24 hours (11 million), most viewers for the premiere of a music video on YouTube (3.9 million), most viewed music video in 24 hours (108 million) and more.

In addition to those impressive musical accolades, BTS is also the most streamed group on Spotify (beating British band Coldplay) and the most followed music group on Instagram, according to Guinness World Records.

But the announcement also made sure to mention the boy band’s impact on international society and culture.

“Despite their young age, Jin, Suga, J-Hope, RM, Jimin, V and Jungkook have left a mark in the present cultural landscape, breaking free from the limitations of their home market and of a language, South Korean, that remains widely unknown to the international public,” Guinness World Records said.

Sharing South Korean culture with the rest of the world is a goal BTS members RM, Jin, Suga, J-Hope, Jimin, V and Jungkook had from the beginning.

In an interview with Billboard in September 2020, BTS member RM said, “I think in the perspective of culture, I think it’s really important to be familiar. So first, we think … that for many Americans (they were) not familiar with (us) — we look different, we (sing) different, we got some different choreography, music videos, like everything, even lifestyle. But I think as time goes by, we’re doing these shows and songs and concerts and awards, I think quite a lot of people in the American music market is getting, like, kind of close (to us). I think it’s very good and that’s what we wanted actually.”

In addition to their 23 records and induction into the Hall of Fame, BTS will also receive a two-page spread in the upcoming printed Guinness World Records 2022 book.

It is safe to say that BTS is “smooth like butter” and will “pull you in like no other”!

India & US 2+2 dialogue to be held in November: Foreign secretary – World News