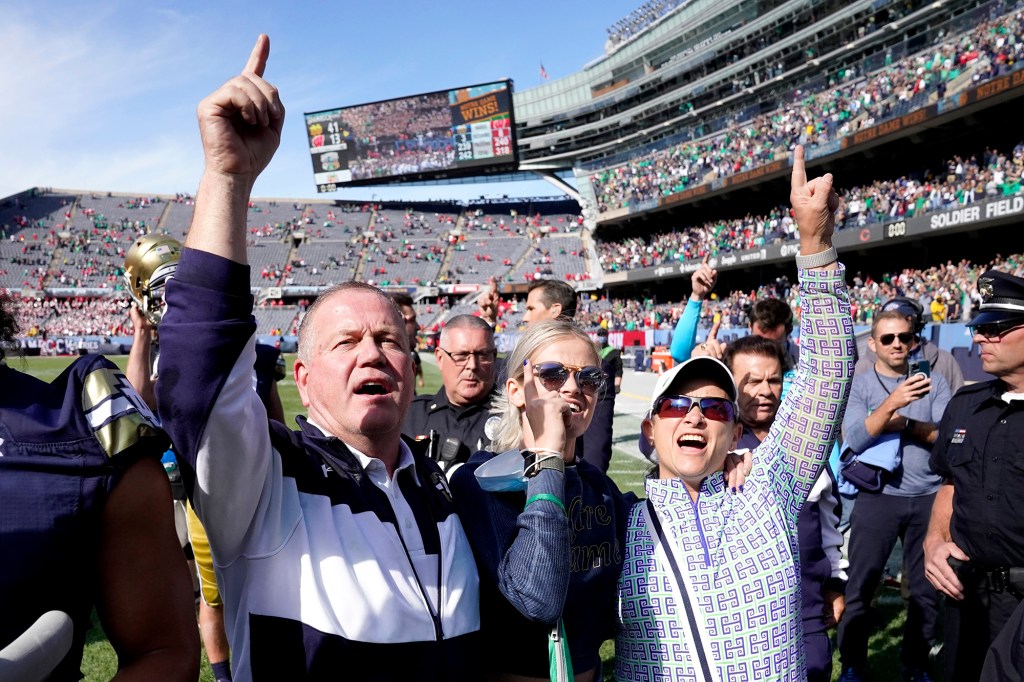 
CHICAGO — To win more games than any coach in the storied history of Notre Dame football, Brian Kelly has needed to be adaptable.

Maybe never more than the first month of this season. The Fighting Irish have used three quarterbacks and four left tackles, moved away from their run-first mentality and added new wrinkles on defense to head into October unbeaten.

Chris Tyree returned a kickoff 96 yards for a touchdown and Drew Pyne threw a fourth-quarter touchdown pass in relief of an injured Jack Coan, helping No. 12 Notre Dame pull away from No. 18 Wisconsin 41-13 on Saturday at Soldier Field.

The Fighting Irish (4-0) have shown plenty of vulnerabilities as they retooled a team that went to the College Football Playoff last season. But they keep winning.

“We got a long way to go still, but they’re getting better each week,” Kelly said. “I’m having fun coaching them. They’re not perfect by any means, but they’re going to be better in November.”

“Last year we were a veteran team. We hunkered down, we put three tight ends on the field. This is what we were and kind of lived with it,” Kelly said. “This is, like, we’re trying to figure it out as we go.”

Graham Mertz threw four interceptions for Wisconsin (1-2), including two that were returned for touchdowns in the final 2:30 to blow the game open. Notre Dame scored the final 31 points and the Badgers lost their seventh straight to a ranked team.

Coan, a Wisconsin transfer, left with a left leg injury in the third quarter with the game tied at 10. Kelly said it was a soft tissue injury, but didn’t appear to be a severe ankle sprain.

““Jack Coan is our starter,” Kelly said. “If he’s physically able, he’ll be our starter against Cincinnati.”

Notre Dame had used freshman Tyler Buchner as a mobile complement to Coan the last two games, but he was dealing with a sore hamstring. So it was Pyne’s turn to step up.

Pyne lost a fumble on his second possession, leading to a field goal by the Badgers, but otherwise the redshirt freshman was solid, going 6 for 8 for 81 yards.

Coan played 22 games for Wisconsin over three seasons and was the starter for the 2019 team that reached the Big Ten championship game. He broke his foot in the runup to the abbreviated Big Ten season last year and Mertz claimed the starting job.

A highly rated 2019 recruit, Mertz had some ups and downs in 2020, but Coan could see where things were headed and transferred to Notre Dame.

He has been a solid fit playing behind a struggling offensive line. Coan completed 15 of 29 passes for 158 yards and a touchdown, and was sacked five times by his former team.

The blind-side sack of Pyne put Wisconsin at the Notre Dame 39. The Badgers stalled in the red zone, and Collin Larsh kicked a 27-yard field goal to put Wisconsin up 13-10 with 14:14 left in the fourth quarter.

The lead lasted 13 seconds. Tyree took the kickoff at the 4, found a seam to the left and turned on the speed. The sophomore outraced the Badgers for the touchdown that put the Irish up 17-13.

“I think that was the game-changing play,” said Notre Dame cornerback Cam Hart, who had two interceptions.

Notre Dame got a strip sack by Jayson Ademilola on Wisconsin’s next possession, and Isaiah Foskey recovered on the Badgers 46.

Pyne followed with four straight completions, including a 16-yard slant to Kevin Austin for a touchdown that made it 24-13 with 9:34 left.