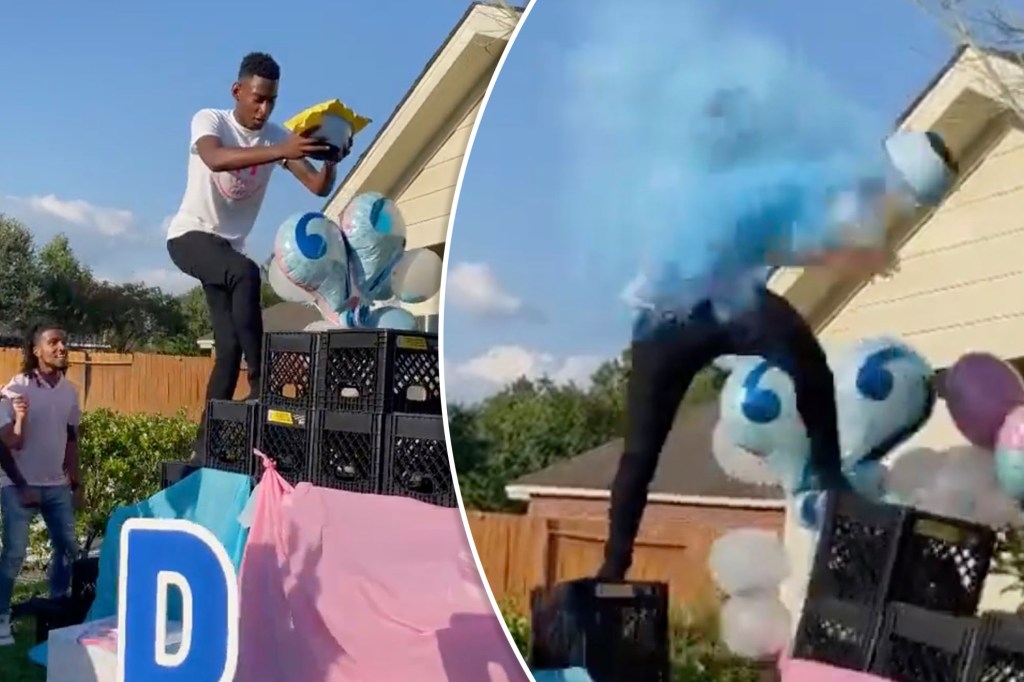 Thought gender reveal parties and TikTok challenges weren’t harebrained enough on their own? One idiotic couple decided to combine the volatile pastimes by disclosing the sex of their baby while attempting the highly dangerous “Milk Crate Challenge” — with disastrous results.

A video of their backfired feat currently boasts millions of views on Twitter.

For the (perhaps gratefully) uninitiated, the viral Milk Crate Challenge involves trying to ascend a staircase-like stack of plastic boxes. While seemingly simple on its face, the stunt generally results in the participant falling from a dangerous height and potentially injuring themselves, which has resulted in the high jink getting banned on TikTok.

Nonetheless, one chuckleheaded man attempted to incorporate the foolhardy feat into his gender reveal party by scaling the milk crate Kilimanjaro while holding a parcel containing either blue or pink powder.

The viral video shows the bozo wobbling as he reaches the halfway point, causing the crates to collapse like a Jenga stack, whereupon he topples off and hits his head on a box. During the unceremonious fall, the blue powder gets released into the air, signifying that the baby is a boy.

The clip concludes with the party guests, including the pregnant mother-to-be, going buckwild over the result.

Suffice it to say, the head-cracking stunt didn’t sit well with social media.

“About to be a father and taking these sorts of risks with his life for a viral video … Lordt,” tweeted one unamused viewer.

Another wrote, “Two points: The bar is really low out here. Let’s all pray for that little baby boy. RIGHT NOW.”

However, others suspected that the display was a fake, suggesting that the mother’s supposedly pregnant belly appeared too distended to be real.

“That belly looks fake as hell and she looks to be waaaay late into a pregnancy to find out the sex of the baby,” wrote one skeptic, while another added, “This has to be fake. Her stomach is basically at her chest.”

Meanwhile, some postulated that the video was poking fun at our culture of clout-seeking internet stunts. “This is done ironically, right?” wondered one netizen. “They’re too into it for it not to be parody on some level.”

Another quipped that at least this gender reveal party didn’t “start a forest fire,” as was the case with another pyrotechnical baby unveiling bash in California last fall.