Bobby Valentine: Mets-Braves set tone that ‘America was together’ after 9/11 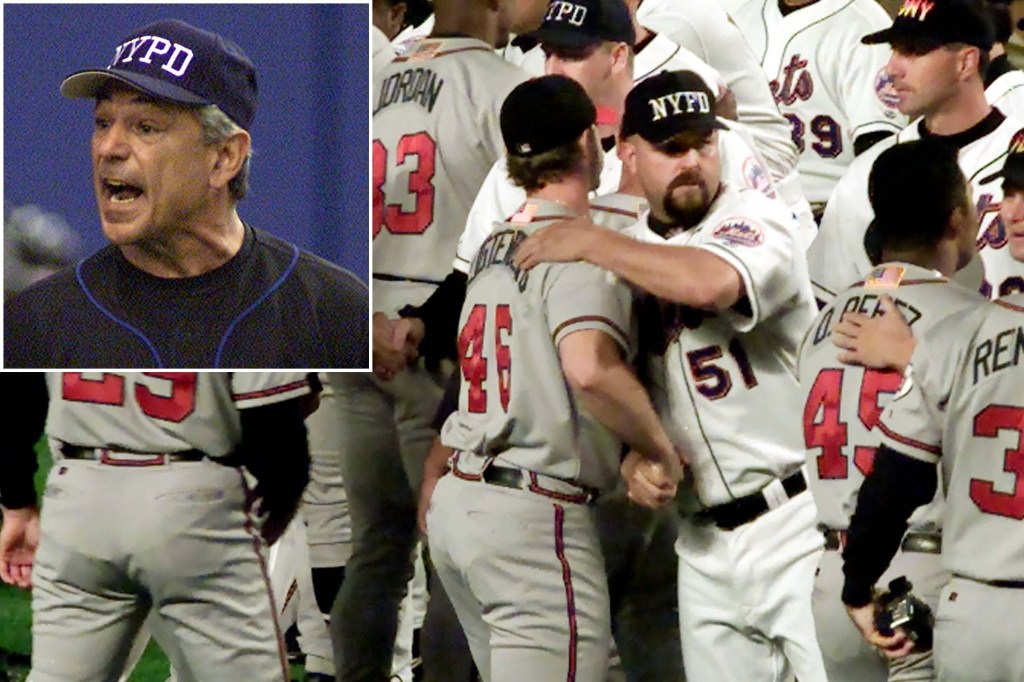 
As told to Ken Davidoff.

Early in the morning on Sept. 11, 2001, I got up, went to the gym at the Mets hotel in Pittsburgh and got a little bike ride in. I came back and was pouring my coffee when the TV showed the first plane hitting one of the twin towers.

Immediately, there was a big question of what was going on, but initially, I thought it was just a pilot error. As I was drinking my coffee, thinking about how tragic it was for the people in the building and on the plane, the phone started ringing. And then the second building was hit.

And I knew it was a call to action.

It has been 20 years since then, but it seems like yesterday. It’s still real for me.

As our games in Pittsburgh were postponed, we quickly switched hotels from downtown, which was across the street from the local FBI headquarters, to one in the suburbs. After a couple of days there, we received clearance to return to New York via the buses we had rented initially to take us to and from the stadium.

When we were driving through New Jersey on the way home after a long, seven hours or eight hours on this bus, it was now light outside. And I knew, and some of the other guys who were local — Johnny Franco and Al Leiter knew — that as we were approaching the Meadowlands area from the Jersey side of the Hudson River and we’d come around the bend, we’d be able to see across to Manhattan. So there was an anxious moment or two with everyone waking up and looking to the right, and the people who were sitting on the left side of the bus all kind of got up and got into the center aisle so that they could see through the window what we were going to get to see.

The wind was blowing from the south up to the north, and so when we looked across expecting to see Manhattan, we looked across and saw literally just a dark cloud. That brought a real somber attitude onto the bus where we now were no longer looking at the horrific site on television. We were seeing it with our own eyes. It was surreal. It was hard to comprehend that there was that much smoke being emitted from Ground Zero. That brought a silence to the bus and that silence was heard from 10 miles before the George Washington Bridge to the time we got to the Shea Stadium parking lot.

We didn’t immediately understand that Shea had been designated as a staging area for the rescue workers. The Mets were connected at the hip. Not only was it our city and our country, but now we were also going to be an integral part of the rescue effort. And I think that was a call to action for the entire organization. Our head of media relations, Jay Horwitz, did great work, as did Kevin McCarthy and Sue Lucchi, who headed up our stadium operations.

I think our players totally connected to the healing process. It was inspiring to be around guys like Johnny and Mike Piazza and Todd Zeile. All the guys, not only the star players, the people of that 2001 team, the men of that team and their wives, gave so much to try to help the healing process. It really was amazing. And then, after attending funerals and going to homes, baseball came back.

We returned to Pittsburgh to restart our schedule after six days off. I wish I could remember those well, but I know now that I was sleep-deprived. I was emotionally drained. I have literally no recollection of playing the games in Pittsburgh.

Even the legendary Sept. 21 game, our first game back home and the first professional sports event to be held in New York, I’ve never seen the game from start to finish. But it was really, really an incredible day. The game itself obviously was secondary, I thought the pregame ceremony was incredibly inspiring and emotional. There was not a dry eye in the stadium during the national anthem, when the teams embraced in the middle of the diamond, the bad guys and the good guys saying they were in this together in a symbolic gesture for the world to see, it was really, really, really cool. I even thought after the embrace that we could call off the game. That enough was done. We set the tone: America was together.

But little did I know that the hero would step up in a heroic moment. Mike hit that eighth-inning home run off the Braves’ Steve Karsay and just turned every frown upside down. It was an incredible flash of a second that the sound itself was resounding. It was like no other sound of any home run ever heard. And right afterwards, the sound of the crowd, it made everything go numb for a second. The world stood still for that brief second in time for me where I literally saw the page turn. Some people think that was the end of something. In essence, that was the beginning. That truly was the beginning of the healing process and of the elimination of fear, of the bad guys, because the good guys prevailed as we and the Braves played such a great, absorbing game.

That game was the most spectacular event I ever participated in, and that moment will last forever as the greatest personal experience that I ever had, the capper to a 10-day package that was so much more than 10 days.

How Mets and Yankees stack up heading into crucial Subway Series