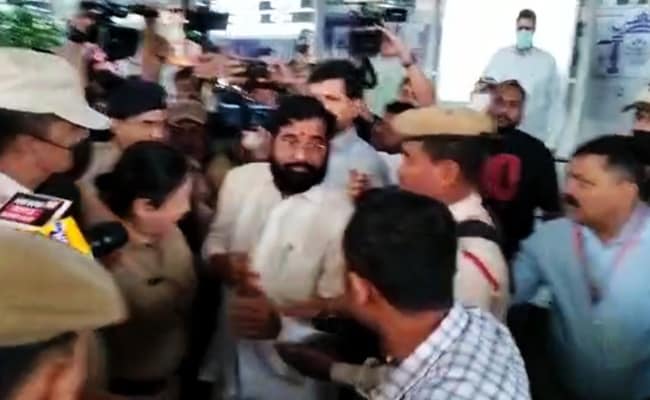 Eknath Shinde and other MLAs were moved to Guwahati earlier this morning.

Shiv Sena came down heavily on the BJP today as it faced a crisis in Maharashtra, with several of its MLAs camping in Guwahati led by state minister Eknath Shinde.

Calling the developments a BJP ploy to topple the three-party coalition government led by Uddhav Thackeray, the party asserted in an editorial in its mouthpiece “Saamana” that such attempts will fail.

The Sena further termed Mr Shinde as a “traitor” and said, “The traitor MLA ran away, being scared of the Enforcement Directorate (ED) and CBI.” Opposition parties have often alleged witch-hunt of its MLAs by the BJP-ruled Centre using central agencies.

Mr Shinde, the rebel minister, has claimed the support of over 46 MLAs, but denied that he has any plan to switch parties.

The Sena is a major constituent of the Maha Vikas Aghadi government in Maharashtra, besides the Nationalist Congress Party (NCP) of Sharad Pawar, and the Congress.

Mr Shinde and other MLAs were moved to Guwahati earlier this morning from Surat in Gujarat. Sources said the rebel Sena leader has demanded the party to restore its alliance with the BJP.