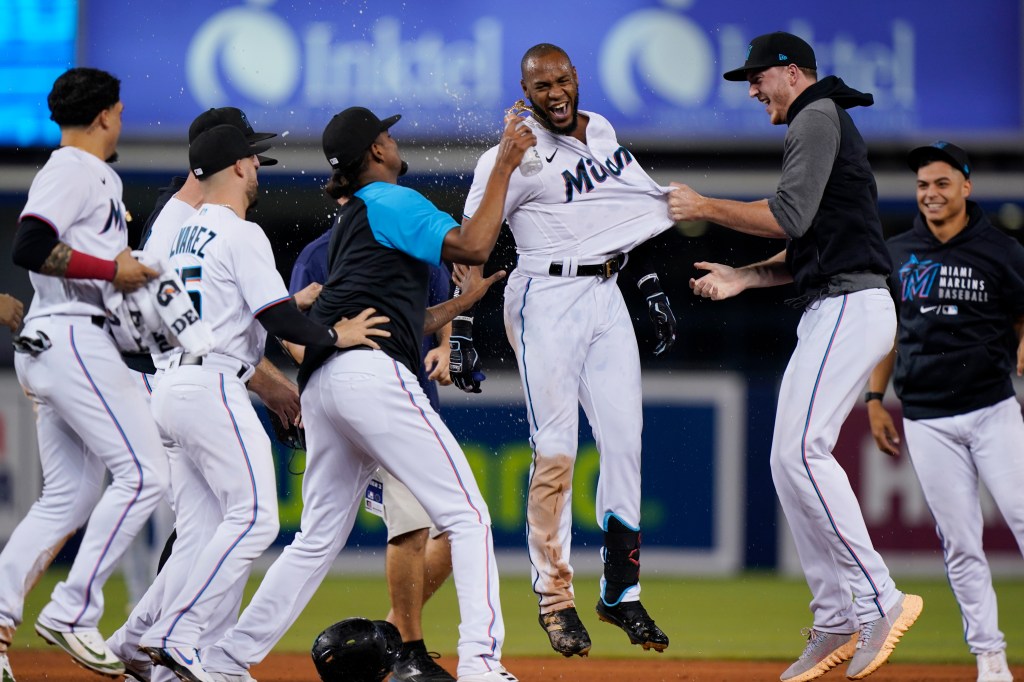 
MIAMI — The Mets encountered a force of nature Wednesday that took a lineup producing at recent reasonable levels and turned it to mush.

Sandy Alcantara was that force, and his Herculean effort over nine innings overwhelmed the Mets, leaving them to walk off the field for the second time in three days as the home team celebrated.

Edwin Diaz surrendered an RBI double to Bryan De La Cruz in the 10th inning, sending the Mets to a third loss in five games, 2-1, to the Marlins at loanDepot Park.

After automatic-runner Jazz Chisholm Jr. was bunted to third base to begin the 10th, Diaz struck out Jesus Sanchez. But De La Cruz ended it with a shot over Albert Almora Jr.’s head in center field.

It was a third straight down performance for Diaz, who blew consecutive save opportunities in Washington over the weekend, including Monday’s 4-3 loss. This run was unearned per the extra-inning rules.

Seth Lugo walked a tightrope in the ninth, loading the bases with one out before striking out Miguel Rojas and retiring Chisholm Jr., sending the Mets to extra innings for the third time on this road trip.

Alcantara was close to untouchable, firing 114 pitches over nine innings in which he allowed one run on four hits with a career-high 14 strikeouts. The right-hander was still hitting triple digits in the eighth inning, when he retired Dominic Smith on a grounder off a 102 mph fastball.

Jeurys Familia and Aaron Loup induced inning-ending double plays in the seventh and eighth innings, respectively, to keep it 1-1. Familia got Miguel Rojas on a double-play grounder after James McCann threw away Alcantara’s sacrifice bunt, attempting to nail the lead runner at second. Loup got De La Cruz on a double-play grounder to end the eighth after allowing two singles in the inning.

Alcantara stifled the Mets for six innings before Michael Conforto cleared the fence in right-center in the seventh to tie it 1-1. Conforto’s blast was his 12th of the season and fourth in his past 11 games.

Rich Hill gave the Mets a second straight superb start, allowing one earned run on five hits with eight strikeouts over six innings. It followed a six-inning shutout in Washington last Friday in which the left-hander allowed just three hits.

Hill surrendered an RBI single in the second to Alex Jackson that gave Miami a 1-0 lead. De La Cruz doubled to begin the rally, before Jackson delivered with two outs. Hill allowed another single in the inning, bus escaped by striking out Alcantara.

The Mets missed an opportunity in the second, wasting a leadoff single by Javier Baez and Kevin Pillar’s hit by pitch, as McCann hit into an inning-ending double play. Baez’s single was the Mets’ last hit until Conforto’s homer in the seventh.

Conforto struck out to end the first, after Pete Alonso had delivered a two-out double to continue his hot offensive stretch — he blasted career homers No. 100 and 101 a night earlier, after going deep on Monday in Washington.