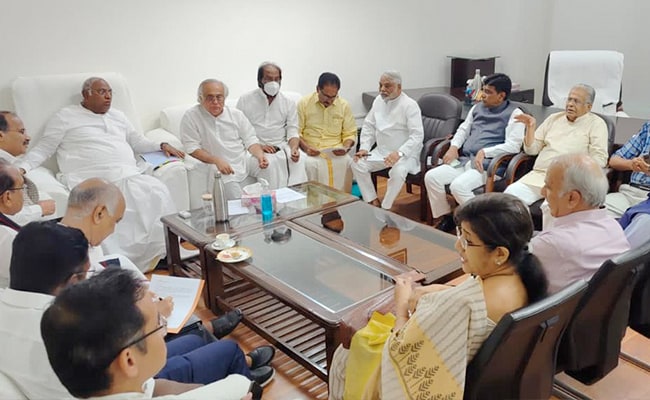 Trinamool Congress, Aam Aadmi Party, and Samajwadi Party did not attend the meeting.

Just as Congress chief Sonia Gandhi is set to appear at the Enforcement Directorate office for questioning in a money laundering case, almost 13 opposition parties today attended a key meeting chaired by the Congress to discuss “relentless political vendetta” by the Centre which has “unleashed” probe agencies to target political opponents. A statement released by like-minded opposition parties has condemned the BJP-led Centre’s “misuse” of investigating agencies.

“The Modi Sarkar has unleashed a relentless campaign of vendetta against its political opponents and critics through the mischievous misuse of investigative agencies. Prominent leaders of a number of political parties have been deliberately targeted and subjected to harassment in an unprecedented manner. We condemn this and resolve to continue and intensify our collective fight against the anti-people, anti-farmer, anti-Constitution policies of the Modi Sarkar that is destroying the social fabric of our society,” a joint statement released after the meeting said.

Telangana Chief Minister K Chandrashekar Rao’s party TRS, which has so far stayed away from meetings where the grand old party was present, also joined the meeting today. As the main opposition party in Telangana, Congress has recently intensified its attack on KCR and his party ahead of the next assembly elections scheduled for 2023.

Trinamool Congress, Aam Aadmi Party, and Samajwadi Party were among the major opposition parties absent from the meeting.

Mrs Gandhi has been asked to reach the probe agency’s office at noon. Congress office bearers and members of frontal organisations will accompany her as a mark of solidarity, sources said. Her questioning had been deferred earlier after she tested positive for Covid and was hospitalised. After being released from hospital in mid-June, she had asked for more time to appear before the agency.

“We condemn the interrogation of Sonia Gandhi. The ED could have come to her residence if they wanted,” Rajasthan Chief Minister and senior Congress leader Ashok Gehlot said at a press conference by the party, lashing out at PM Modi and the Centre. The party alleged that central agencies are being used to silence the opposition which is highlighting the failures of the government and raising issues like price rise and unemployment which affect the common people.

Congress MP Gaurav Gogoi today also gave an adjournment motion notice in the Lok Sabha to discuss the misuse of investigative agencies such as the Enforcement Directorate (ED) and Central Bureau of Investigation (CBI) by the BJP-led Centre. He also stressed that these agencies are being used as a tool to curb opposition in the nation and it’s imperative that the independence of these agencies is protected for an effective democracy.