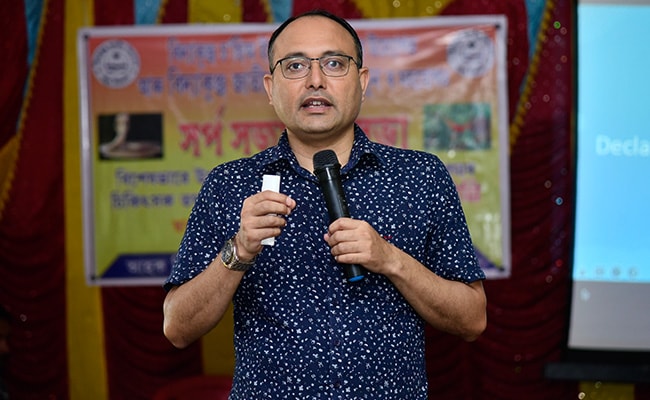 This is a fascinating story of a real hero from Assam, Dr Surajit Giri, a Government anesthesiologist who serves in a rural hospital in Assam’s Sivasagar district and has cured more than 1,200 snakebite victims from across the state. For over a decade, Dr.Giri who is known as the ‘snake doctor’, has been treating snakebite victims in rural Assam and has developed a snake bite ward in a rural hospital, along with a new module of snake bite treatment, which till now has a 100 percent success rate.

It is busy hours at this rural hospital, the Demow Community Health Center (CHC), in Assam’s Sivasagar district, almost 400 KM east of Guwahati. 47-year-old Dr. Surajit Giri rushes into a very special and unique ward that exists only in this rural hospital in all of Assam – the snake bite room. A young patient has just arrived, he has already been administered life-saving medicines by the members of Dr. Giri’s First Reaction Team or  FRT. Dr Giri examines the patient and finds him to be out of danger. This snake bite room has all the life-saving drugs, equipment, and trained staff to treat snake bites. This team and the room are the nerve centre of a unique snake bite treatment protocol that Dr. Giri has developed and made operational in 2018. 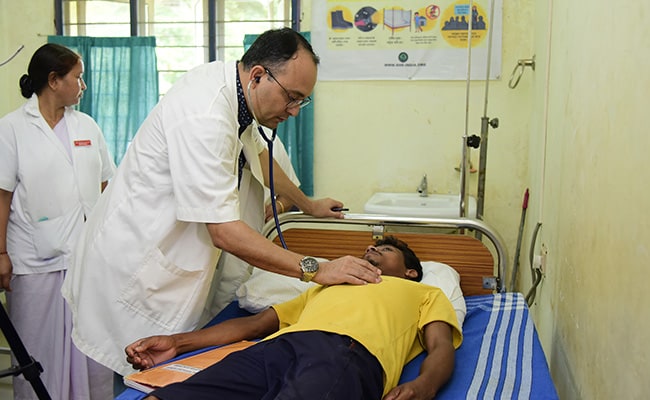 The ‘Snake-Doctor’ has cured more than 1,200 snakebite victims from across the state

“In 2008 one lady, a victim of state bite died in front of us. We did not inject any anti-venom and didn’t know proper treatment protocols or guidelines; we referred the patient to a higher centre, on the way to which she died. We were moved and decided to take up this challenge of saving patients with snake bites,” Dr. Giri told NDTV.

Since then, till date Dr Giri and his team has treated 760 snakebite patients at the CHC with no death and 100% success rate.

Since the start of his career, he has treated more than 1,200 snakebite patients. In 2021 alone, Dr Giri treated 464 patients at the CHC. All these as part of a self-motivated mission of the doctor to help poor people get treated for snake bites in government hospital without involvement of ICU or expensive drugs.

“In India anti-venom is made out of the big snakes like the Cobra, Krait, Russel Viper and short scale Viper. But Russel Viper and short-scale Vipers are not present in Asam, but there is a huge presence of the Pitt Viper from which anti-venom is not made. So, we came up with a new protocol, established this snake bite room, we have formed Venom Response Team or the VRT and the FRT. We went to the vulnerable communities and educated people on snake bites and created the Venom response team from these people,” Dr. Giri further added.

According to Dr. Giri, a patient bitten by a Pit Viper did not respond to 55 anti-venom doses, even though there was no coagulation of blood, as an alternative they administer magnesium sulphate with Glycerine, that has worked. They have treated Pit Viper bites without traditional anti-venom with total success. This protocol has been published in a peer-reviewed journal on toxicology as well. For the patients, it’s a big respite.

“I had a snake bite from Pit Viper snake, I had huge pain, it happened at my home, immediately I was brought to this hospital, they treated me so well that within 12 days I was completely fine,” said snake bite victim Karishma Changmei.

Dr. Giri’s efforts do not stop at saving lives in the snake bite room, rather it begins in the rural areas, the villages where snake bites are common, more so during summers. His weekends are never about taking a day off, but he uses the weekends to organize awareness camps on snake bites and promote his VRT model. Trying to identify volunteers for his venom response team.

“The moment we get to know about snake bite, we rush to the house of the patient, take a photo of the wound and the patient and send it to the WhatsApp group of the VRT. The doctor and his team respond to what needs to be done and we shift the patient to the hospital,” said one of the VRT team members Partha Nath.

However, the task is not only to battle snake bites but also superstitions, where rural folks lose golden hours of treatment by taking the patients to quacks. In the past few years, Dr. Giri has conducted more than 140 such awareness camps and the results are emerging.

“Our villages are in backward areas, therefore, awareness about snake bite treatment was very less and we were dependent on quacks but now with the awareness camps, the situation has changed and in this area, about 95 per cent of snake bite patients go to the Doctor’s hospital,” a local villager from Demow Brajen Phukan told NDTV.

For patients like Purnima Tanti, who works in a tea garden nearby, being alive is a blessing after being bitten by a cobra.

“I was only saved because of this doctor, my voice had choked, I was sinking, tongues had come out, I was about to die when they saved me. If I had died my family would have crumbled, as I am the only breadwinner and my survival was important” Tanti narrates at her home in a tea garden in Demow.

Dr. Giri says that snake bite is a poor man’s ailment and it has to be treated in a rural health facility. In India an average of 58,000 people die from snakebites annually. This adds up to nearly 50 per cent of the global snakebite deaths. Perhaps Dr. Giri’s VRT protocol might be a model for many to follow.