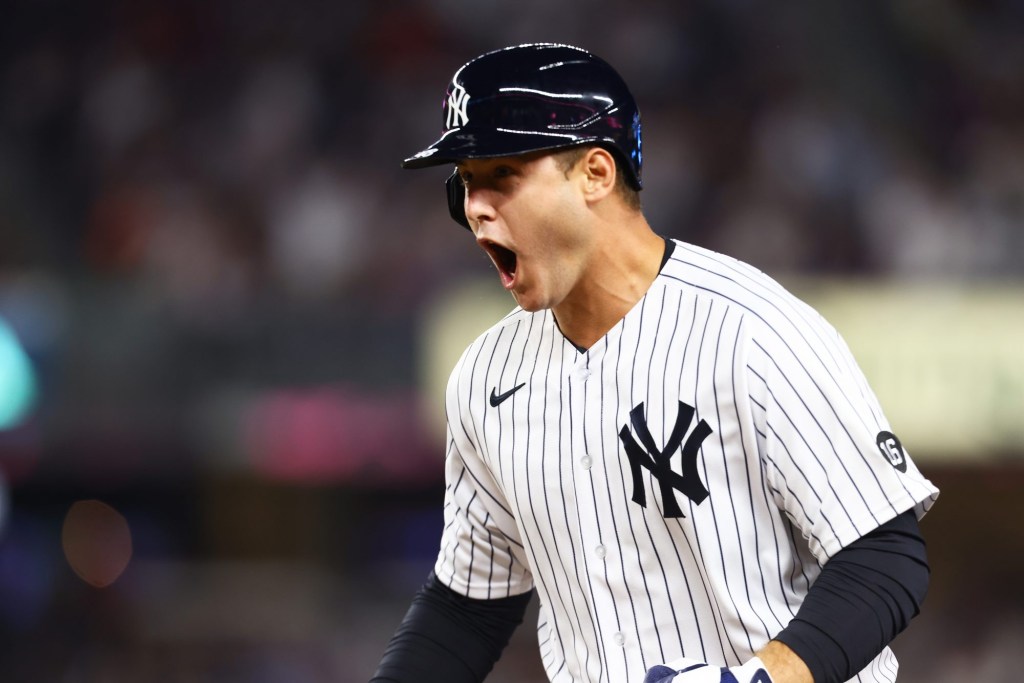 Yankees slugger Anthony Rizzo, acquired from the Cubs in a trade-deadline deal July 29, takes a swing at some Q&A with Post columnist Steve Serby.

Q: When you were a Cub, you visualized winning a World Series. Are you big into visualization?

A: I think in 2015, after we lost, and in ’16, I think the whole organization, the team mentality was that we were envisioning the parade and winning the World Series, and I think that belief and that thought was powerful. You gotta see it. You gotta see yourself doing certain things and preparing for those moments ’cause those moments could come up at any given time. Especially in the playoffs, you just gotta envision it — that’s big picture — but also stay in the moment and what it takes to get you there and that’s your routine.

Q: Have you envisioned or visualized a Canyon of Heroes parade?

A: It’s something where the belief starts to build more and more. I’m obviously new to the whole franchise here. Every inning, every at-bat, every time a guy comes in from the bullpen and locks it down for us, it just continues for me to build up belief and start seeing things in the future that could be real.

Q: Could you imagine what winning a championship as a Yankee would be like?

A: It would be amazing, that would be for sure. It’s been a while here, right, for the Yankees, since ’09. Any place is special, but when you do it in the big markets, I feel like it’s such an enhanced experience.

Q: How did winning the 2016 World Series with the Cubs change your life?

A: I just think that to be on any championship team, you’re connected to the guys forever. You’re connected to that group of guys. You start at spring training, start at that journey, you hit bumps in the road, you hit adversity, something went wrong during the playoff run I’m sure, and to overcome that and win … You usually dream about maybe a certain team when you’re younger, but when you get to the big leagues, you don’t really get to pick your team. So, ended up doing it in Chicago, breaking a curse being there for so long and really knowing the history of Cubs fans, I just think of that more special. Even the growing pains, just a lot life lessons.

A: Playing on bad teams, learning how to become a professional, growing up, trying to stay even-keel through the good and the bad.

Q: Describe that feeling when Kris Bryant fielded the grounder and threw the ball to you for the final out.

A: Everything coming to fruition. All the hard work, all the extra work, the bus rides in the minors, the late nights traveling that year, just everything coming to fruition, and seeing how happy everyone was. It was probably 50-50 Cubs fans and Cleveland fans, but even the Cleveland fans had, I feel like, the respect for us just ’cause they were in a drought too. It was a very fan-friendly World Series the whole time. … We had a rain delay, we gave up a home run … to sorta overcome that and win in Game 7 … you can’t ask for any more.

Q: You immediately put the ball in your back pocket. What happened to that ball?

A: I ended up giving it to the owner of the Cubs on the parade when I spoke to the crowd. I just pulled it out and gave it to him, it was 108 years in coming, so I think giving it back to Mr. [Tom] Ricketts was the right move.

Q: What was it like for you being the face of a franchise and such a fan favorite in Chicago?

A: It was great. I got to go and play baseball every day and enjoy it. Wrigley’s special, there’s only a few places in baseball where you can go to an iconic park every single day and play and Wrigley’s one of ’em, Yankee Stadium’s one of ’em, and there’s a few others. Just to be able to play year in and year out, stay on the field and just to try to have fun, and that’s what I did.

A: I try to play as loose as possible. Especially on defense, locked in for 150 pitches a night, be ready, so you lock in for that one-to-two seconds, and then you turn off for about 20 seconds and then you lock back in. It’s just about being ready for that pitch and then kinda relaxing but … just always trying to have fun, that’s it, try to enjoy the game, it’s not gonna last as long as anyone thinks in their career, so you gotta enjoy every single moment.

Q: What drives you?

A: Continue to be at the top, year in and year out. When I was young, I always looked at Miguel Cabrera, just every single year he was back to where he was the year before. … Adrian Beltre … guys who would just continue to put up year after year numbers after numbers. That’s what you want to do. And then, on top of that, coming over here, it’s all about winning a World Series now. When you’re playing for that, there’s nothing better.

Q: What have you learned about Joey Gallo?

Q: Gerrit Cole as a teammate?

A: Very engaged in every game. Always is watching and picking up little things and talking the game in the dugout.

A: Same thing. Just professional. He wants to play every day. Again, even-keeled … seems like no one’s really riding the highs too high and doesn’t seem like guys ride their lows hard either.

Q: What was it like for you meeting Derek Jeter?

A: Growing up, he was Derek Jeter, so (chuckle) … playing against him on the same field was one of my big league moments where I was like, “Wow, this is incredible!” Him knowing who I was, or just pretending to know who I was. … But it was really cool to be able to meet him on the field.

A: I was in seventh grade, I was walking to my first class, my teacher’s crying. She put on the TV and we were just watching the news, and then everyone started getting pumped out of class left and right. I have a bunch of family in New Jersey, and my neighbor, who now my brother works for, had people in the Towers. We were at his house when I got home from school. A lot of crazy emotions afterwards. I remember just how united our country felt with all the American flags for months. It was awesome to see.

Q: What are your emotions now as we’re approaching the 20-year anniversary?

A: It’s really cool to be able to be in New York playing the Mets for the Subway Series. That will be really special. But yeah, it’s 20 years. I don’t think it will ever be forgotten, especially for everyone who lived through it, especially in the city. I’ve been to the Memorial, and I’ve been in the museum, and they did such an amazing job with it. Hopefully, this 20-year anniversary, I’m sure that they’ll be remembered as they should be.

Q: Have you been vaccinated?

A: I just had COVID, so they say for three months I’m kinda in the clear, so I think after that it will be the time to really make the decision again.

Q: What was the low point for you during your cancer battle when you were 18?

A: I just don’t look at it like that, like there ever was. I mean, not being able to play that year, I would say. But when the doctors told me everything I had to do, it was just kinda like, “Let’s go, let’s go, let’s go.” Between treatments there were some pretty crappy moments, but the mindset was just always, “I’m gonna beat this, there’s no way, there’s no way.” Staying upbeat, staying positive. Some days I didn’t feel good I would just sleep a little bit longer.

Q: What do you think of John Sterling’s home run call for you?

A: I’ve heard ’em. The Rizzo Rakes? I think it’s great, I think it’s awesome. Obviously been doing it for so long, so it’s just really cool, really special to be on the Yankees and being on this side of it and enjoying the ride in these next three months as much as I can.

Q: If you could face one pitcher in MLB history?

A: I think Babe Ruth. And then to be able to see him hit as well would be amazing.

Q: Why would you pick him?

A: He’s Babe Ruth. He did both. You see [Shohei] Ohtani doing it now. … Also, Nolan Ryan would be fun to face.

Q: You can pick the brain of any player in MLB history?

A: I’d probably just have to say Babe Ruth again (chuckle). … He’s just one of the original best players to ever play, and how he did it, just hitting all those home runs and being so good for so long.

A: I think just still learning everything, coming in and learning the culture which is very, very good. It’s a strong clubhouse, guys get along really well, and everyone’s very prepared for the game and very professional. It makes it very easy to do your work.

Q: Have you been to the Monuments?

A: I have not been out there yet. It’s something I’ll definitely do before the end of the year.

Q: Thoughts on the Bleacher Creatures?

Q: What is so great about New York City?

A: I think just so many different options — the restaurants, and to go out … if you want to be a tourist, you can be a little tourist, if you want to take walks, Central Park … there’s so much to do. … Me and my wife are big foodies, different restaurants are definitely nice for us.

A: I think it’s too early to know. … I love going to Carbone, but we definitely will be trying all different restaurants here in the next three months.

Q: How old were you when you wrote a note to your grandmother that read: “I’ll be on TV soon and making the big money?”

Q: What prompted that?

A: I have no idea. … I always wanted to play baseball like every other kid growing up as a dream, and my grandma and grandfather were so inspirational in my life just growing up.

A: Al Capone; George Washington; one of the Holocaust survivors.

Q: Your message for Yankees fans?

A: Enjoy this run we’re on right now. The team has been very excited to play, and I think the never-quit mentality is real on this team, and I think it’s been showing. It’s a deep, deep, deep lineup to where when we wear out pitchers, you’re gonna see a lot of three-run innings, four-run innings, two-run innings, five-run innings just ’cause of how deep our lineup is.

Q: Is the feeling similar to the Cubs feeling in 2016?

A: Obviously it’s different, and I haven’t been here long enough, but it’s definitely building, and feeling like that vibe. There’s obviously a very, very, very long way to go, and anything happens in the playoffs with different bounces, but as far as the culture on the team, it’s very similar.