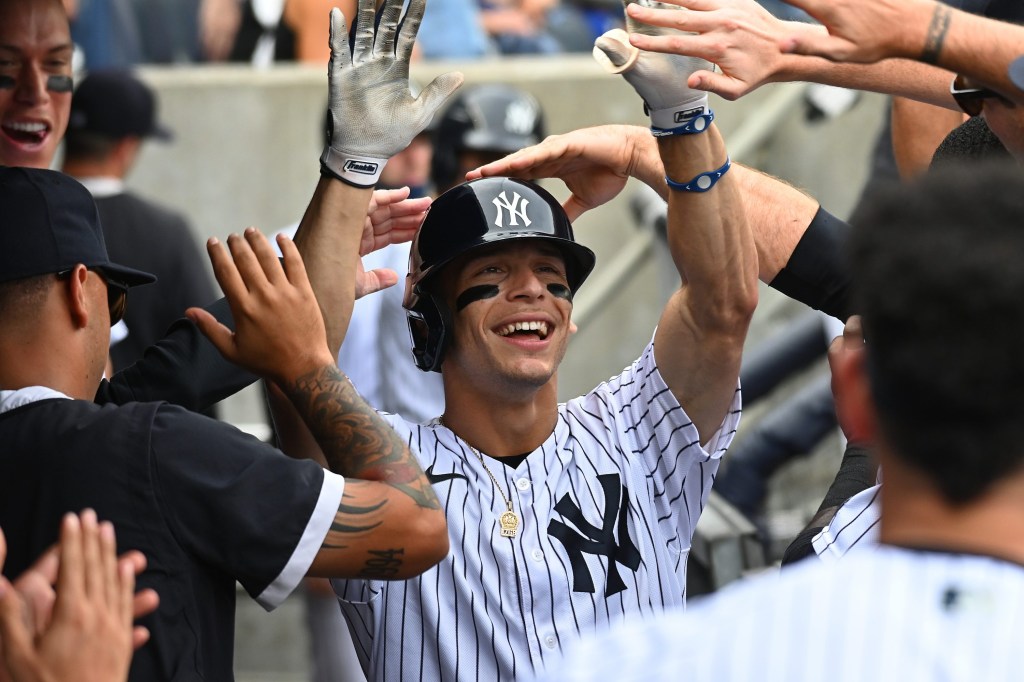 
Margaret Maldonado-Velazquez looked out at the Yankee Stadium field and beamed with pride.

Her son Andrew, who grew up a Yankees fan and dreamed the longshot dream of one day playing shortstop in The Bronx, was fielding grounders at the position, preparing for his seventh start in eight games for the red-hot AL wild-card leaders.

The last few weeks have been a magic carpet ride for Andrew and his Yankees-loving family, as he has adeptly filled in at shortstop for Gleyber Torres. He has been living at home with his parents in the Morris Park section of The Bronx, eating home-cooked meals and getting his laundry done.

In a sweep this week of the rival Red Sox, three victories that enabled the Yankees to leapfrog Boston in the standings, Andrew took center stage. He drove in as many runs (four) as the Red Sox managed the entire series. And The Bronx native, who starred in high school at Fordham Prep, capped the sweep with a phenomenal defensive play deep in the hole at shortstop.

“I wanted Major League Baseball to see what my son can do, especially defensively,” his father, Ken Velazquez Sr., said. “New York is the biggest stage of them all. For him to do it here, in the pressure moments, it was a little, ‘Holy cow [moment].’

When he was 10 years old, Andrew had a birthday party at the old Yankee Stadium and toured the field. Margaret recalled a picture he drew in first grade. It was him in pinstripes. He was going to play for the Yankees. Knowing how hard that might be, she asked her son what else he wanted to do when he grew up.

For the past few weeks, he has gotten to play the same position.

“Same real estate, that’s how I see it,” Margaret, a school teacher, said. “Isn’t that amazing?”

It has been far from a straight road to The Bronx for the 27-year-old infielder, a seventh-round pick of the Diamondbacks in the 2012 MLB Draft. The Yankees are his fifth organization. He has played in the minor leagues for parts of nine seasons and accumulated 2,705 at-bats. He finally made the major leagues on Sept. 2, 2018 with the Rays and played in a career-high 40 games for the Orioles last year, though he hit just .159.

He found himself without a team following the season, and signed a minor league deal with the Yankees in December. Through it all, Andrew never showed his parents or his brother, Ken Jr., any hints of frustration. His determination never waned. His work ethic didn’t fall off.

“Andrew was always a kid from birth that was very strong-willed and very confident,” Margaret said. “He’s into all that positive thinking, positive thoughts. I’ve learned so much from him in thinking positively and just setting goals.”

She’s still working on keeping her nerves in check. Margaret gets nervous when Andrew is at the plate. She prays and sometimes closes her eyes.

“I just wait to hear the sound of the bat,” she said.

On Saturday, Margaret got to see her son circle the bases for the first time in his major league career, after he homered in the eighth inning of the lopsided victory. It continued his impressive play.

When Torres was placed on the injured list with a sprained thumb on Aug. 9, Velazquez got his shot with his hometown team, and he has made the most of it. He has played strong defense at shortstop, has gotten some big hits and has contributed to the Yankees’ longest win streak of the year.

Velazquez’s father, a retired police officer, has seen some memorable Yankees-Red Sox encounters in person. The storied rivalry has produced some moments that remain etched in his memory. But nothing could beat this past series.

“It’s different when your son’s out there for sure,” Ken Sr. said.

As recently as last fall, Andrew trained at nearby Macombs Dam Park, and wondered what it would be like to call the Stadium home. He now knows the feeling.

“He’s living his dream every day,” his father said.

Storm Henri could hit US Northeast as a hurricane – World News