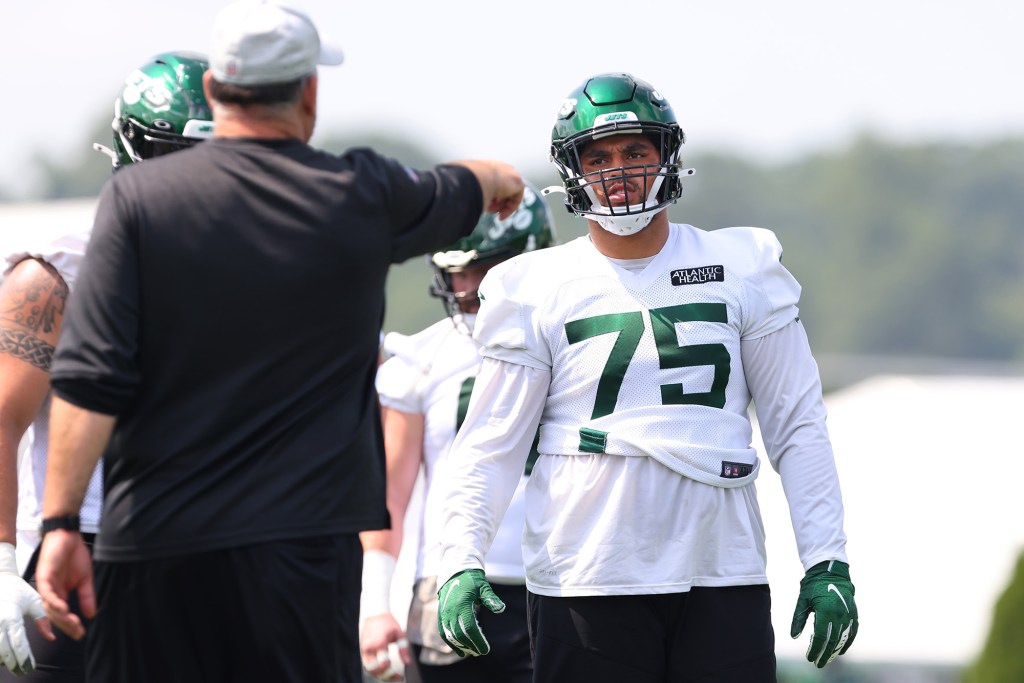 The Jets hope the left side of their offensive line will be a constant for the next decade.

The hyped pairing should debut on time, but without much of a dress rehearsal.

Alijah Vera-Tucker returned to practice last week and has been building reps to ensure he can be the Week 1 guard after missing about three weeks of training camp and each preseason game with a pectoral strain. The 2021 first-round pick is confident he will be in Carolina alongside 2020 first-round tackle Mekhi Becton.

For a third straight year, the Jets’ projected offensive line did not take a snap together in the preseason, and so much of the team’s success — and Zach Wilson’s progress — will hinge upon the unit meshing quickly.

“In OTAs we were all with each other,” Vera-Tucker said this past week.

That’s the same rationale coach Robert Saleh has offered amid concerns of the group jelling.

Continuity on the line has been a problem since the days Nick Mangold and D’Brickashaw Ferguson could not be removed from games. Two years ago, center Ryan Kalil was added during training camp. Last year, because of the pandemic, there were no preseason games.

This year, the 14th-overall pick from USC has gotten in a lot of conditioning work to make sure he won’t be winded and ensure the pec injury — the first of his life, he said — doesn’t bother him again this year.

He pored over film to try to stay ready.

“I was always taking mental reps,” said Vera-Tucker, whom the Jets traded up from 23rd to draft. “Always looking at film with [center Connor] McGovern in the film session, taking as many notes down as I can so when I come back, I’m not taking any false steps, I’m right where I should be.”

He is a key piece whose primary replacement, Dan Feeney, did not impress during camp. Behind John Benton, the new offensive line coach, the Jets will be using a wide-zone running scheme that depends upon linemen athletic enough to block laterally, rather than just the defender lined up in front.

Vera-Tucker, listed at 6-foot-5, 308 pounds, said he’s a fan of how the scheme “spreads out the defense, how it gets the defensive line tired.

“[Defensive linemen] don’t like running at all. Side-to-side running, whole lot of running you got to do. Definitely opens up holes for the running back. Also allows linebackers to come up and fill those holes, so Zach can just start dicing up the secondary.”

It is nice to envision, but there has not been much of a glimpse of that without the Jets’ line together yet. Vera-Tucker did not play a preseason snap; Becton missed time with a concussion. Further-down depth — potential backups Cameron Clark (spinal-cord contusion), Conor McDermott (knee) and Chuma Edoga (knee) have dealt with injuries. Guard Alex Lewis retired.

It has not been the ideal start for the unit tasked with protecting the Jets’ new franchise quarterback, but they expect the hurdles to be cleared by Sept. 12, when the Panthers await.

“They picked me for a reason,” Vera-Tucker said. “To come in, start and dominate.”