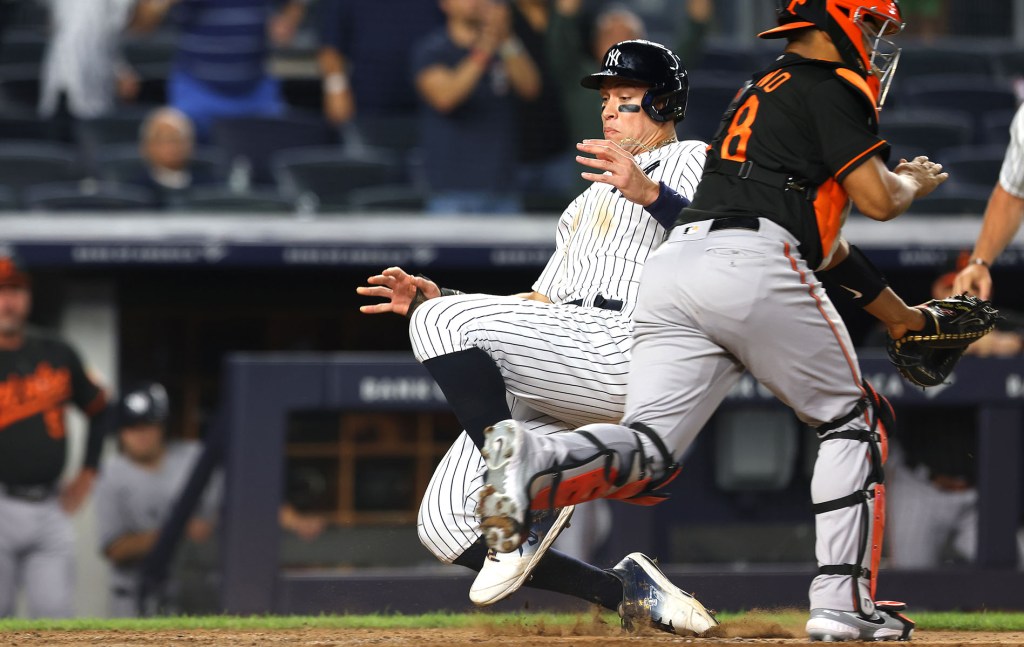 Giancarlo Stanton was the man on this night, no question. He hit a home run against the Orioles, and singled in the winning run in the 11th inning. Had the Yankees lost this game to a team 50 games below .500, it would have been tough for anyone in The Bronx to get more than an hour or two of sleep.

But it was fitting that Aaron Judge was the ghost runner who slid across the plate to make it a 4-3 final. Judge was hardly a ghost on Friday night, or any other night, even though he didn’t get the big hit in the 10th. At an ultra-visible 6-foot-7, 282 pounds, he moved over to center field to clear room for the 6-6, 245-pound Stanton in right. That Twin Tower effect is a remarkable sight in the outfield, and Judge is the one who makes it possible.

“He is a great athlete, one, and he can do it,” manager Aaron Boone said. “And in a lot of ways it’s going home for him, where he played most of his life. Second, it’s the kind of teammate he is. It’s whatever you need, and he loves going over there. He loves doing it … and that’s really valuable.”

Judge in center field in Yankee Stadium is a bit like William “The Refrigerator” Perry in the Bears’ backfield in Super Bowl XX. It’s awfully hard to take your eyes off him.

To see Judge live is to remember that he is five inches taller and 67 pounds heavier than the giant whose presence filled the old ballpark like no other: Babe Ruth. The Bambino is Phil Rizzuto compared to Judge. In fact, when the Yankees outfielder chatted with the 6-2, 195-pound Boone behind the batting cage Friday, the manager looked about the size of a teenage clubhouse kid.

The Yankees will have to pay Judge a ton of money next season, in his final year of arbitration, or in a long-term deal to keep him away from free agency in 2023. They need to keep the 29-year-old outfielder the face of the franchise for the rest of his prime.

Why? You can find players around baseball who look or play like everyone else on the Yankees’ roster, even one or two who match up with Gerrit Cole. Not Judge. There’s no replacing him. If you’re looking for another Judge, you need to walk into an NBA or NFL locker room.

He is athletic enough to play center and to turn a hard single to left into an acrobatic double, the way he did in the sixth inning. The Orioles’ Austin Hays made a good play cutting off the ball and firing a strike to second as Judge hit a second gear and threw himself into a headfirst slide. As Jahmai Jones reached for him with his glove, Judge pulled back his left hand and grabbed the corner of the base with his right, just beating the hard tag to his upper chest.

Judge kicked up a cloud of dust, and ended up on his back as his helmet went flying. He emerged unscathed, and headed back to center for the seventh. He stayed there for the full 11 innings, waiting for another ball to run down, like the shallow fly he ran down in the first.

The big man’s versatility gives Boone so much flexibility to play with. “It’s very impressive, and huge for our best lineup too,” Stanton said. “The fact that he’s so versatile to be able to bounce over to center, I’m sure he can play left if we needed him too as well. It’s huge for us.”

Judge was assigned to play the position that puts a premium on speed and grace for the 18th time this year, while carrying 32 more pounds than the Knicks’ heaviest player, Julius Randle. And he made it look easy.

Of course, Judge has made everything look easy of late. He hit .500 on the Yankees’ road trip. He has reached base safely in 24 of his last 25 games, and is batting .387 with eight homers and 24 RBI in that span.

It’s quite possible baseball has never seen a hitter with this package of size, skill, athleticism, and power, and yet the other night in Anaheim, Calif., Judge said of his recent performance: “I wouldn’t say it’s anything to write home about yet.”

Almost every time Aaron Judge shows up at the ballpark, it’s worth writing home about. Including Friday night, Stanton’s night. Judge is still the Yankees’ ultimate giant in every conceivable way.