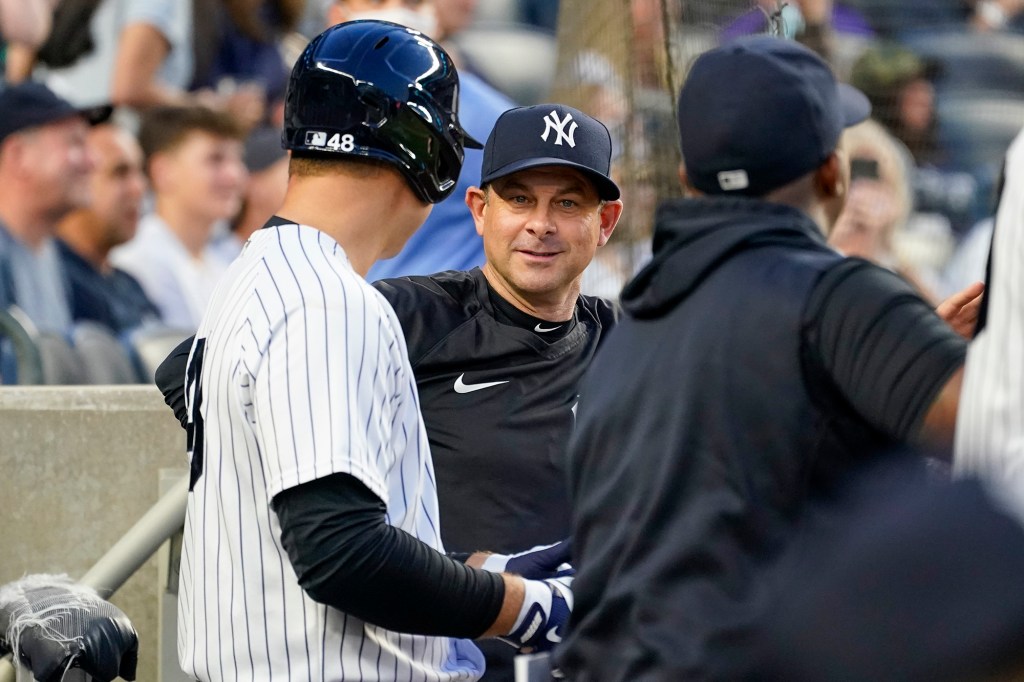 Aaron Boone was always a safe bet to run into tough times in The Bronx. He was just another ex-jock TV guy who had never been a manager, or even a coach, when given one of the biggest jobs in sports. No way he was making it unscathed from his first Yankees contract to his second.

Yeah, Boone represented a baseball family that had seen four men over three generations play in the big leagues and make it to the All-Star Game, including his father Bob, a former manager. But being the son of a former manager is like being the son of a former pilot. No amount of hours spent around cockpits and airport lounges truly prepares you for the first time you are the one navigating unexpected turbulence at 30,000 feet.

The late, great Chuck Daly used to say that a coach’s job is to land the plane safely. Inside most franchises in most leagues, safely usually means the playoffs. The Yankees look at it a bit differently.

Boone knew those terms of engagement when he was hired in December 2017. He knew that as big as his walk-off Game 7 homer against the Red Sox was in 2003, it would have been bigger (as in much) had his team not fallen to the Marlins in the World Series. You either win it all as a Yankee, or you answer a lot of unpleasant questions until you do. Boone signed up for that reality, and nobody forced him to.

So his judgment day is coming in October, though not in the context of immediate job security. Assuming Boone completes the stunning turnaround of what once appeared to be a lost season, and reaches the playoffs for the fourth time in his four years as manager, he will almost certainly get that second contract. Brian Cashman has a lot invested in him. He fired a man, Joe Girardi, who had just reached Game 7 of the ALCS for the right to hire someone he believed would better connect with young players. Someone like Boone.

But the fans are a different story. Girardi bought himself time with the people by winning a championship in his second season as Joe Torre’s successor. The longer Boone goes without delivering a ticker-tape parade, the more pressure will be applied to Cashman and Hal Steinbrenner to abandon the goal of having their guy match the two Joes as Yankee manager for at least 10 years.

The fans always get their man in the end.

For now, Boone deserves praise for inspiring his players to perform like they didn’t across the first half of the season. Cashman helped him significantly at the trade deadline, but the manager’s Torre-like temperament was a valuable asset as the 2021 Yanks transitioned from joyless, one-dimensional stiffs into versatile, fun, and free-flowing contenders.

Boone kept his head while many around him were losing theirs. Some new players pumped some new blood into the system, and suddenly the Yankees were charging up the AL East and wild-card standings with the help of a shortstop, Andrew Velazquez, one of the best long-shot stories in the city since Jeremy Lin. Now the Yankees look strong enough to win the whole thing for the first time in a dozen years.

Girardi, of all people, predicted this in a conversation with The Post last month, when his Phillies were in town and prospects still appeared grim for his former club. “I see a postseason team,” he said of the Yanks. “Until they don’t make it, I won’t believe it.

“I still don’t think they’ve hit their offensive stride. You get a couple of guys hot in that lineup, they’ll score runs galore. …There’s still a ton of talent over there.” Girardi added that he thought highly of his successor. “Just look at his record since he’s been there,” the Phillies’ manager said.

Today, Boone’s career winning percentage is .606, a tick better than Torre’s winning percentage with the Yanks (.605) and a lot better than Girardi’s (.562). Boone also happens to be the first baseball manager ever to start his career with back-to-back seasons of at least 100 victories. Of course, he has yet to reach a World Series, never mind win one. And he still might have to survive a sudden-death wild-card game just to advance to the Division Series.

Upon hiring Boone nearly four years ago, Steinbrenner and Cashman described him as a candidate whose communication skills put him Secretariat lengths ahead of the field. Over the last month, those skills helped Boone save the season and his job.

He is now favored to be back next year. But how a returning Boone is received by the Yankee fan base will be determined, as always, by how (or if) he’s connecting with his players in October.