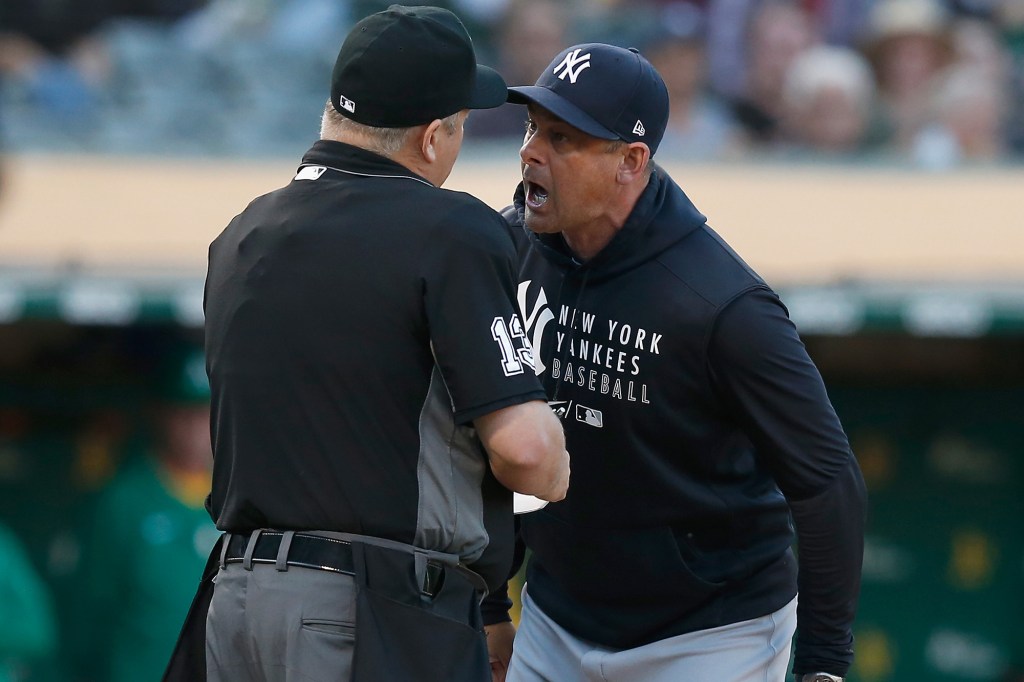 OAKLAND, Calif. — It was no “Savages in the Box,” but Aaron Boone’s ejection — and ensuing outburst — after two bad ball-strike calls by home plate umpire Todd Tichenor just four Yankees batters into Thursday night’s game against the Athletics had the Bombers talking following their 12th straight win.

“It means a lot,” Aaron Judge said of Boone’s reaction in the top of the second, following a called third strike on Joey Gallo on a 3-2 pitch that was clearly outside.

That followed another questionable call on a called strike on Judge that ended the top of the first.

Boone’s ejection — his fifth of the season — seemed to have an immediate impact on the Yankees’ offense.

Former Yankees prospect James Kaprielian whiffed the first four batters he faced for the Athletics — including Judge and Gallo.

“It fired up the team. It fired up the boys,” Judge said. “That first inning, [Kaprielian] struck out the side and then Boone fought for us a little bit and we put six runs up.”

Gallo, who has only played for Boone for a few weeks, was equally impressed.

“I really respect it,” Gallo said of the ejection. “It fires you up. You can tell he’s into the game just as much as we are.”

Gallo hit a three-run homer in the Yankees’ four-run third that seemingly put them in position to cruise to an easy victory.

But Jameson Taillon didn’t get Boone’s message and gave back nearly the entire lead before the A’s tied it against Albert Abreu.

Judge’s ninth-inning RBI single, after Tyler Wade stole second and move to third on a throwing error on the play, put the Yankees ahead for good.

But both Judge and Gallo gave Boone credit for changing the trajectory of the game before he was given the boot.

“As players, we want to voice our opinion at times,” Judge said. “But we also have to be smart and stay in the game. Boone did what he does and picked us up.”

These days, it seems Boone can do no wrong. The Yankees entered Friday with their longest winning streak since 1961.

Even without the injured Zack Britton and Aroldis Chapman still finding his way back as closer, the Yankees have been on a tear since losing to the White Sox in the “Field of Dreams” game in Iowa on Aug. 13 — a game in which dramatic homers from Stanton and Judge put the Yankees ahead in the top of the ninth, only for Tim Anderson to hit a game-winning home run off Britton.

With the Yankees playing the Braves in a National League park on Tuesday, Boone was aggressive with the bullpen, pulling Andrew Heaney after just four innings.

Gardner, pinch-hitting for Heaney, lined out, but the Yankees scored twice in the inning and held on for a one-run win.

Speaking of one-run victories, the Yankees improved to 22-12 in those results this year with Thursday’s win. For perspective, they went 6-7 in last year’s COVID-shortened schedule.

They have played this season in an MLB-high 71 games decided by two runs or fewer and their 48-23 record there is the best in the majors.

An improved lineup and a solid bullpen certainly are a key reason for the success, but Boone surely deserves some credit.