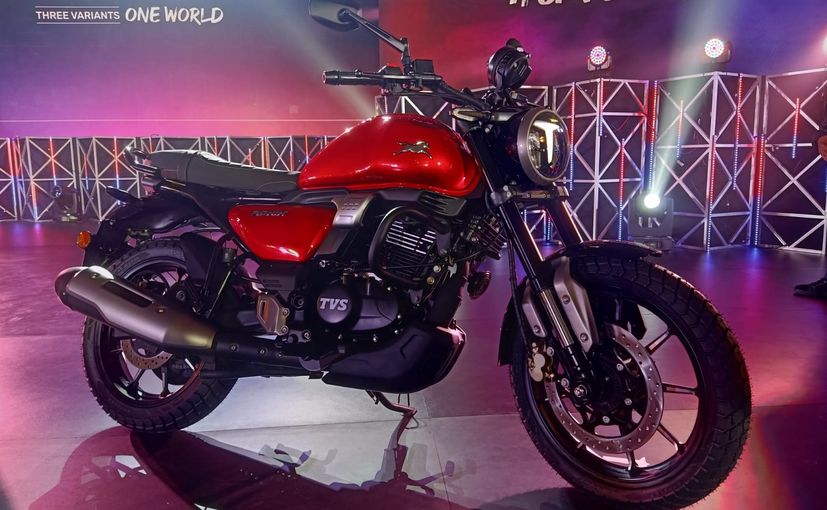 TVS Motor Company has launched the company’s first neo-retro roadster, the new TVS Ronin. Ronin arrives in three variants, with prices ranging from Rs. 1,49,000 to Rs. 1,68,750. The Ronin is built on an all-new platform, and could possibly be the first model to be announced on this platform, with a 225.9 cc, single-cylinder engine and a new split dual-cradle frame. The engine puts out 20.1 bhp at 7,750 rpm and 19.93 Nm of peak torque at 3,750 rpm, and it is tuned for a strong low and mid-range than higher-end performance. The motorcycle has a claimed top speed of 120 kmph. The engine is mated to a five-speed gearbox and according to TVS, the Ronin is built for urban adventures, to take on rough roads, and can double up for mild off-road duties, more like a crossover, than a pure off-road ready scrambler.

The shape of the fuel tank is more retro than modern roadster, while the side panels have a hint of 1980s roadster design. The single-piece flat seat is also more retro-styled than contemporary, and the blacked-out wheels, engine cases and alloy wheels are more 21st century than harking back to the later part of the last century, as is the case with most modern classic designs.

On the feature front though, the TVS Ronin is a completely modern motorcycle. The Ronin runs on 17-inch alloy wheels, and are wrapped in new Remora block pattern, dual-purpose tyres. The motorcycle has gold-finished Showa upside down front fork with big piston tech for better damping, and a gas charged monoshock rear suspension with a floating piston. Braking duties are handled by a 300 mm disc on the front wheel, and a 220 mm disc on the rear wheel with standard fit ABS – dual channel on the top variant. Moreover, the ABS also has two switchable modes – Rain and Urban. The motorcycle gets full-LED lighting, and TVS claims a better light throw compared to the best in segment motorcycles. The instrument console is full-digital, and features Bluetooth connectivity through the TVS SmartXonnect system, offering multiple connected features.

Loosely based on the Zeppelin cruiser concept showcased at the Auto Expo 2018, the design of the production model Ronin has evolved to be more of a roadster with some scrambler-ish elements like the thick block pattern tyres and a standard engine bash plate. But the rest of the design is anything like a conventional factory scrambler, with the Ronin sporting alloy wheels, unlike the spoked wheels on a true-blue scrambler. In fact, the original scramblers of the 1960s were road bikes stripped of their bodywork to make them lighter, and with some underbody protection and bash plates, as well as dual-purpose tyres to take on rough terrain.

With the Ronin, TVS is aiming to create an all new segment of motorcycle targeted at a new generation of buyers, which want a motorcycle that can be used daily, but can also be taken on long tours on the weekends. Keeping this in mind, the Ronin gets ergonomics for long ride comfort, as well as a short wheelbase, offering much better manoeuvrability in the city riding conditions. TVS has especially tuned the gear ratios on the 5-speed box to allow fewer gearshifts, and the low and mid-range grunt from the engine should allow the bike to be pulled hard in third gear in lower revs too. With a weight of 160 kg, the Ronin has a potential to be a good all rounder, and we will be riding it soon to tell you what we make of the motorcycle.